So, over the past several months, I’ve been posting random toys hoping to gather insight on what they are and where they come from. I’ve been successful in a lot of cases, but other times I ask the readers to speak up and help me out. While doing this, I’ve accidentally become the weirdo toy “expert.” I now have people coming to me asking about the origin of random toys they’ve found.

Well, one such toy is the topic of my entry today. This toy was actually provided to me by my buddy, John (who has had this thing for a while now), and he was really hoping to find out what it is.

I was a bit hesitant to feature it at first, but luckily, upon seeing the toy, I thought it was pretty freaky too (and now it’s all mine John! Sucker!! 😉 ). 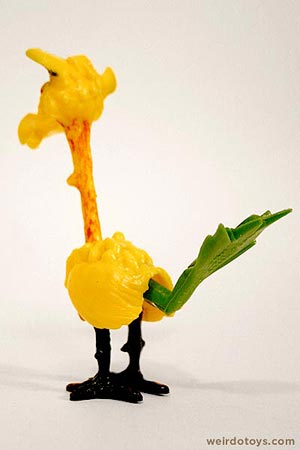 At first glance I thought, “What the hell is this thing?”

The bastard offspring of an interspecies love affair?

So what do we have? At first, it looks like a simple bobbing bird toy – Yellow body, green tail and… red eyes and neck? Uh-oh. Could be something freaky. 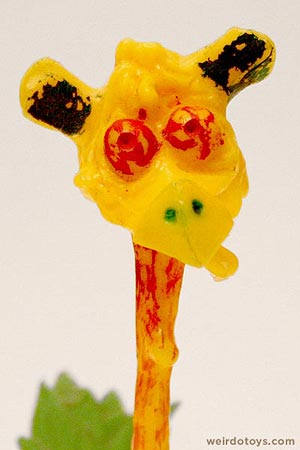 Ears? On a bird? Definitely weird.

An Adam’s Apple? What the hell.

All that accompanied with the freaky looking, rubbed-off paint job definitely makes this thing qualified to be here.

There is a clue on its tail feathers luckily: “1966 Deluxe Reading Corp. 7003-0415 1B1”. Apparently Deluxe Reading Corporation has gone through some name changes over the years, and they’re best known for making dolls and stuff… and even Johnny Lightning cars.

After some annoying research and matching the toy’s serial number to a Deluxe Reading Corp. catalog i found online, I discovered this guy is actually a game piece of some old board game called Silly Safari. 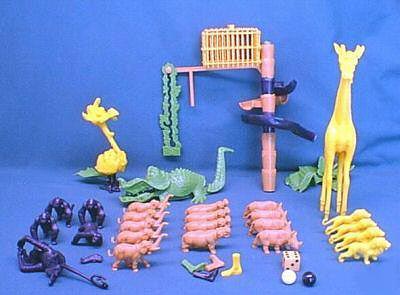 It looks like the paint on the bird piece might’ve been a custom job.

Man, I’d love to get my hands on that alligator. Anybody wanna give him up?