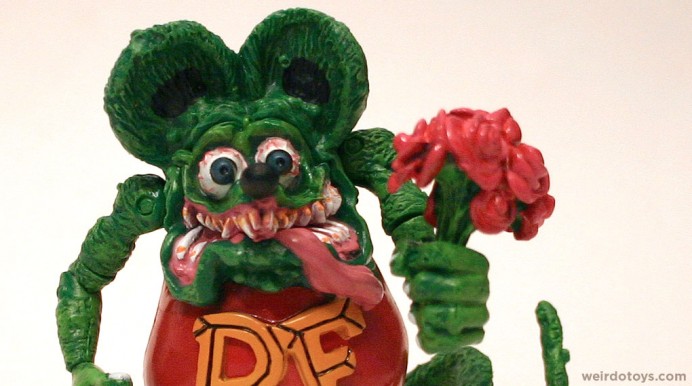 Weeks ago (April 12 to be exact), I made my way down to Athens, Georgia for the annual “mini-comic and zine explosion” known as Fluke. It’s a fun little show hosted at a small bar downtown called Tasty World. At its core, Fluke is a small gathering of people that are passionate about comics, art and the like. I try to make my way down there every year with my buddies from Wide Awake Press, and this year was just the same. After a quick look around the bar and some good (and bad) comics one can get bored easily.

Luckily, just a couple of blocks away lies a store full of comics, toys and all kinds of quirky goodies (junk) you can imagine. The place is Bizarro Wuxtry, and it’s always a joy to visit, because you’ll always find something odd to capture your interest. Whether it’s classic horror comics, cool new toys or some old ALF bubble gum cards, you’ll always discover something new (even if it looks like the piles of junk are untouched year after year). And of course, the most iconic part of the store is its owner, Devlin, in his trademark Bizarro t-shirt. 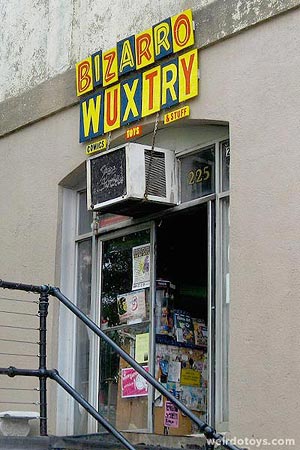 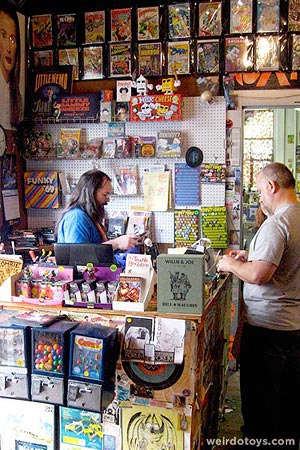 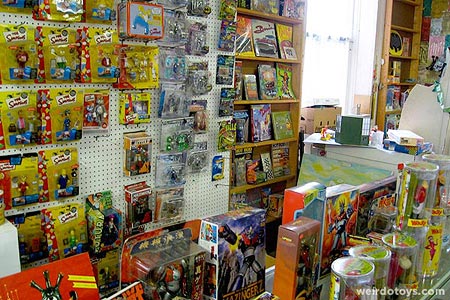 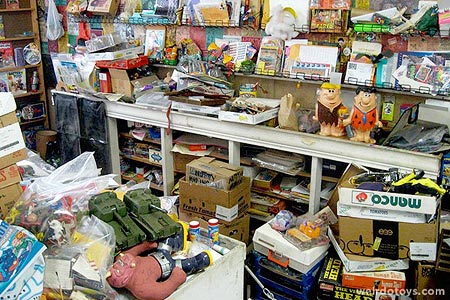 I dropped in and looked around as always. Climbing over piles, delicately moving between shelves and cabinets doing my best not to knock anything over. I didn’t see much of anything that I cared to get (or didn’t already have) when out of nowhere stood this shrink-wrapped stack of Rat Fink toys. They looked liked they’d been sitting there for ages. The packaging looked stained and bleached (probably because it was set up near a window).

The toys are a series of Rat Fink figures based on the infamous characters and illustrations by Ed “Big Daddy” Roth. These things were made in 2000 by Japanese toymaker, Planet Toys (the same folks that brought you that Zowroku toy). So, I’m not even sure if these things were widely available in the U.S.

Here’s a look at the toy packaging.

Luckily, as you can see, the sun bleaching and stuff had no effect on the toys. They look as good as new.

It’s Rat Fink. What else can I say (well, he kind of looks like a really screwed-up version of Mickey Mouse)? He comes with a bouquet of flowers and an interchangeable hand holding a brush. I’m not “in-touch” with the whole hot-rodding scene (or any automotive scene for that matter). I’m not quite sure what relevance these flowers have, but I do know the paint brush is for detailing his car.

This bug-eyed surfer-bum is fairly poseable, but what good is a poseable surfer if the surf board is stuck in his hand? My favorite part of this Surf Fink is probably his big, crinkly neck and back. It also looks like he suffers from a really bad skin condition. Gross.

Oh, and the back of his shirt reads “Surf-Fink San.”

(I tried to put her hand on her hip as shown on the package, but I felt like I was gonna break it.)

Imagine being served by this ugly-ass waitress. Complete with bulging, bloodshot eyes, snaggly teeth, grey skin and stitched scars. Crazy Girl (shouldn’t that be “Waitress Fink”?) is dressed in the classic diner waitress uniform which is great, but she’s wearing rollerblades which feels a bit out of character and out of time. She also comes with a tray with interchangeable items. She can serve you a hamburger, hot dog and a drink or the ever-popular 8-ball burger.

Her hat reads “Crazy Girl,” and the back of her shirt reads “Harvey’s.”

This guy is probably my favorite of the bunch. He’s just a total freak. He has a gnarly mouth full of teeth… and five tongues… covered in blood. That’s pretty good on its own, but combine that with blue skin and the four long eye balls hanging out of his eye sockets and you’ve really got something. He’s also got the awesome ability to rear his head back and open his huge mouth.

It looks like he’s just wearing a regular ol’ tank top, shorts sandals and a big iron cross, and the back of his shirt reads “Irresistible Beast.” 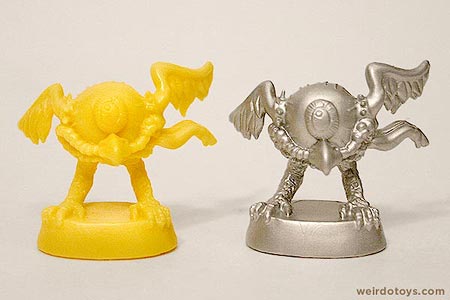 If you’ll notice the toy packaging pictured earlier, each toy is marked with a sticker designating a “Special Figure Included.” Well, behind the “8” in the faux 8-ball on the card there’s a mystery figure. This got me psyched, because I was imagining even more cool little creatures inside those little bubbles.

Well, it turns out, they’re not that great. Sure, this little winged eyeball creature is cool and all, but to get the same damned one with each toy is disappointing. Why not do a unique toy with each character? There was only one difference with the toys – Rat Fink’s little character was yellow. Pretty crappy huh?

I’m not sure what this creature is or what its relevance to Rat Fink characters are. Anyone have any insight?