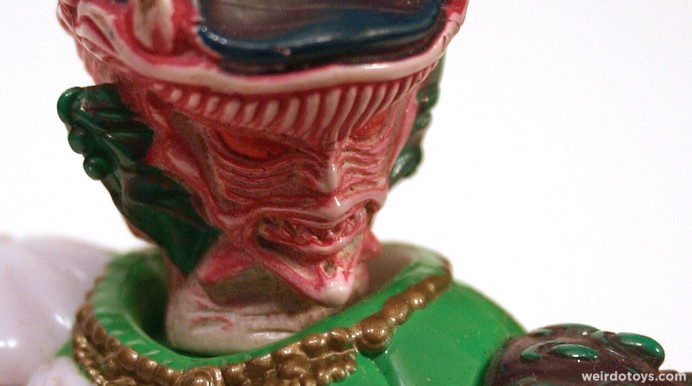 Here’s one of those random flea market toys I found weeks ago. Another lone, quirky action figure.

I wasn’t quite sure what this guy was, but I knew I liked his style. Looks like he should be an evil, menacing villain, but c’mon! He has an arm-swinging action feature (which is broken), a whale on his head, bling around his neck, barnacles and sea shells all over his body… 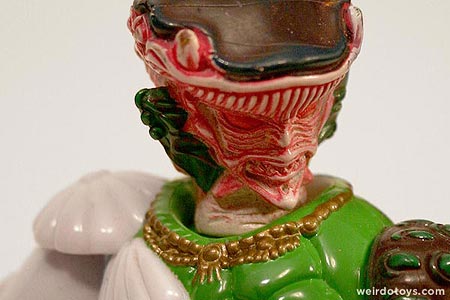 …and he even has a crab for a hand (a truly awesome and hilarious design decision by the way). How menacing could he be? 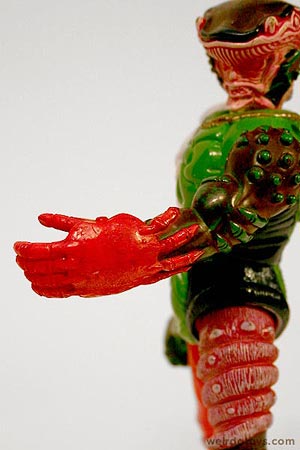 I figured he was a Power Rangers character, but I wanna come up with some better (worse) sea-related jokes to introduce this guy.

– He sells sea shells by the sea shore.
– The REAL Aquaman
– He’s sleeping with the fishes.
– He has a bad case of crabs.
– Mascot for Sea World

Yeah, that’s it. He can be the original, retired mascot for Sea World. Since he was fired by Sea World, he’s become old and bitter. That’s actually not an angry, “evil” look on his face, it’s just frustration due to his lack of any other relevant job skills.

Seriously though, this toy looks to be another quirky Power Rangers bad guy, but as always, ya gotta check the toy’s markings – “© 96 Bandai” on one foot and “Made in China” on the other. 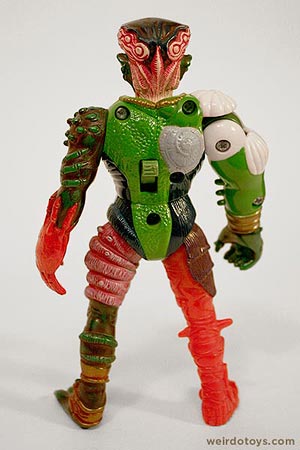 Ya know, I actually had no luck figuring out what this toy was. Seriously, I scoured the web for Power Rangers and BeetleBorgs characters for a pretty good while. Nothing.

But thanks to JohnH at the ToyTraderz.com forums, I was able to get some help identifying this guy. Turns out it’s a Saber-Swiping Typhus figure from the BeetleBorgs toy line, and according to Wikipedia, Typhus is a Chimera, humanoid monster who likes to fight. His whale flattop is actually an extra mouth used to eat food and other junk, and he uses a sword (which blasts lasers when held in his extra mouth) that latches to his arm or his mouth. Weird.

I’m not too familiar with the BeetleBorgs. They just look like another set of brightly-colored, acrobatic kids that fight monsters.

I sure as hell hope, the show wasn’t as bad as this music video I found.