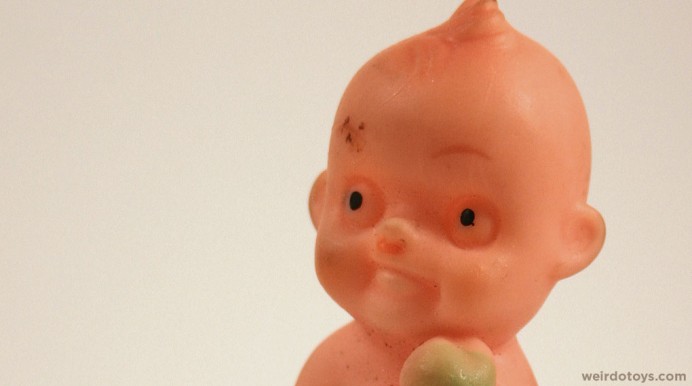 Some very familiar words from this adorable, (yet scrappy) little boxing kewpie doll. 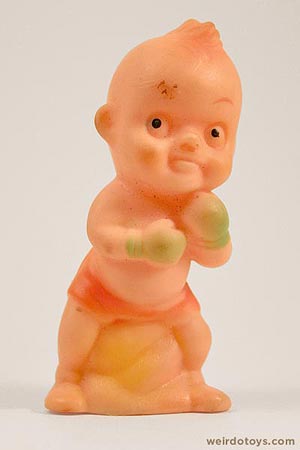 I don’t know much about the little guy. He’s just as small plastic squeeze toy I found at a toy show… buried in a plastic bin full of crappy McDonald’s Happy Meal toys. 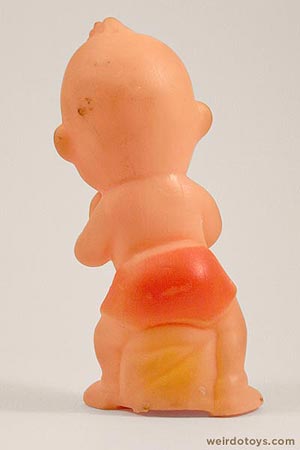 I like the attitude of this guy. He’s cute, but he looks a tad hesitant, but he’s determined and ready to fight. Adding to his aged charm are his faded green boxing gloves and orange pull-ups diapers. There’s also plenty of dirt and grime on the guy. Probably from some back-alley street fights he’s been in recently.

One thing that is weird, is the large, yellow puff of smoke he’s resting on. Could be a fart cloud… or just some weird organic mound of jaundiced flesh. Kind of strange. Seems like a more well-thought-out prop could’ve served him better. A small stool or something would’ve been more appropriate. That way, when he’s sent to the corner he can sit on his stool and yell, “CUT ME MICKEY!!”

I’ve tried to decipher the markings on the bottom of him, but they’ve been virtually removed by the toy’s production process. A sloppy seam of melted plastic is covering most of the letter forms. Oh well. Looks like it might read “© Taiwan,” but that makes no sense. Anyone else out there like to take a stab at it? 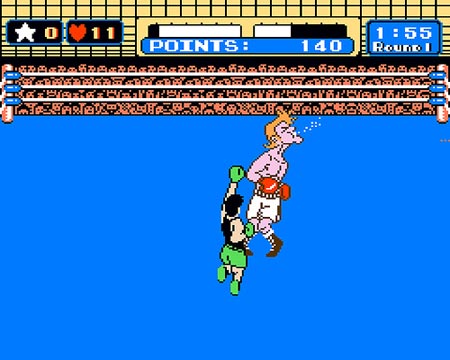 One last thing. This boxing kewpie kid kind of reminds me of the old Nintendo game, Mike Tyson’s Punchout. He’s a lot like the main character, Little Mac – he’s small, scrappy and has green gloves (okay, it’s a bit of a stretch, but I thought I’d share my train of thought).

Anyone have any clue to where this guy came from or if there are others like him? Maybe other sports kewpies or something? Thanks for the help.