Remember the New Adventures of He-Man? I discussed it briefly a couple years ago.

You see, I never really knew about the New Adventures of He-Man cartoon as a kid. I never watched the show or knew the characters or anything like that. I was already out of my Masters of the Universe toy phase, but that didn’t mean I still didn’t like looking around the toy store. My first (and last) exposure to “New Adventures” was on the shelves in a toy store. I still have a vague memory of strolling through the toy aisles of said store and seeing, hanging from the pegs in bold, gold type,”He-Man.” But once I saw what the He-Man figures were, I was a bit surprised, confused and disappointed. The characters were all new, they were a smaller scale, and they were not as freakishly muscular as I’d come to expect. It made no sense. It was traumatic I tell you.

Seriously. This new bastardized He-Man sucked. It seems that there was so much of a distaste for scrawny He-Man, that Mattel eventually released a couple more versions of him which you may notice grew more and more muscular.

Ha! He still looks pretty crappy but at least he’s transforming to the steroid-ridden He-Man. That’s the way we like him.

Well, I’m well beyond the whole purpose of this post. I’ll just say the new He-Man sucked. but it’s been a long time since those days, and looking at the line now with my weirdo-collector eyes, I can actually see the value in some of the “He-Man” toy designs – mainly the villains and especially this villain, Optikk (clever name huh?). 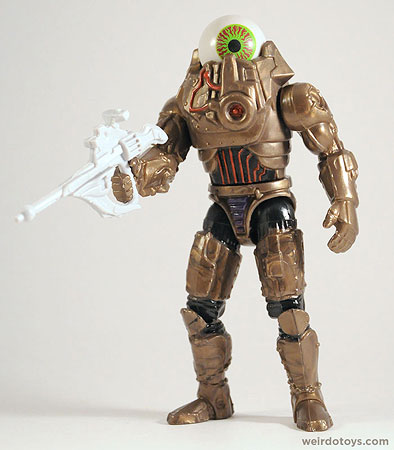 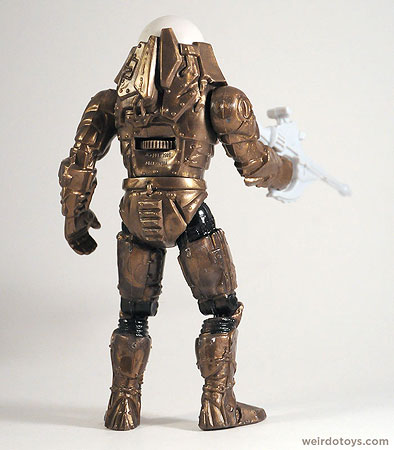 You are looking at one of the freakiest He-Man villains ever created. His head is a giant, pulsing eyeball for cryin’ out loud, and it’s staring through your soul!

Optikk’s been getting a lot of attention lately, because he’s being re-made and released by Mattel in the Masters of the Universe Classics (MOTUC) line. 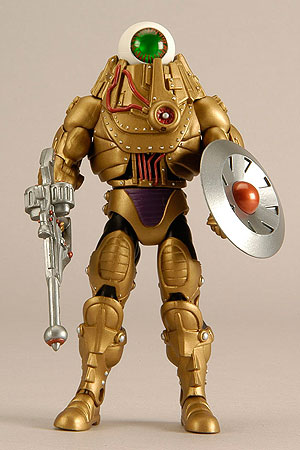 This is a testament to the fan-following this guy has garnered over the years. He looks pretty cool, but I figured I’d show you the original.

Let’s start with the packaging. 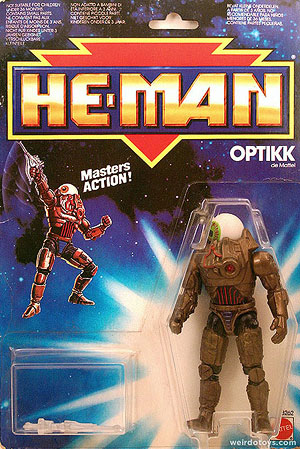 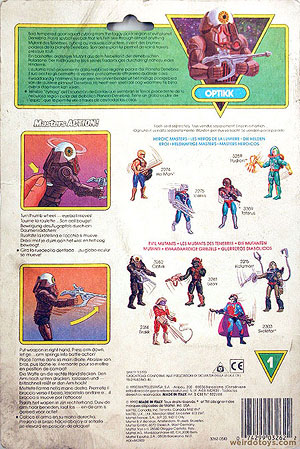 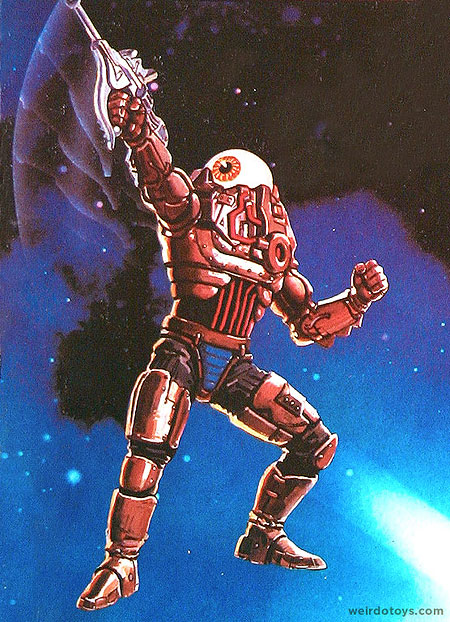 Ah. Good, old fashioned paintings of characters. I’ll always, always enjoy that. Thanks Mattel, for supporting some illustrators. (but I have noticed you’re re-using the same vintage art for the MOTUC lines. Just hire a guy to do new stuff, so it can be consistent.) 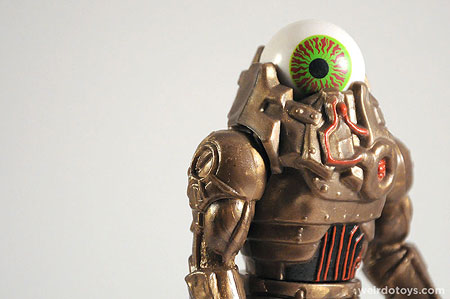 Well, to start things off, I’ll just say, “Ugh.” Look at that freaky eyeball just staring at you. Creepy, huh?

According to his bio Optikk’s a “Bad-tempered goon squad cyborg from the foggy polar region of evil planet Denebria. Has a spyball eyeball that lets him see through almost anything.”

Ok. So he has the huge eyeball to see through the fog. I get it. His “people” have evolved to this point I guess. Giant eyeball heads.

Secondly, as you may have noticed on the package, Optikk has “Masters Action,” and his action happens to be a “quick-draw” move.

It’s cool and all that he draws a gun on you, but it’s really, really lame that his arm is in a permanent, “I’m gonna bust a cap in yo ass” position. To “activate” his quick-draw action, you simply hold his arm down and let go when it’s time for him to shoot. You’re screwed if you ever lose the gun. You’ll be stuck with a guy who just kind of holds his arm out there.

But he has another action that makes up for the lame, rigor mortis arm. 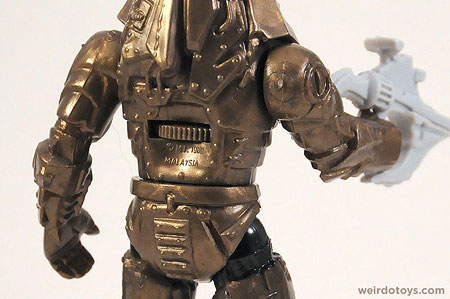 Just spin the dial on his back…

and his eyeball moves!!

In case you can’t figure it out, Mattel has provided some step-by-step instructions.

Optikk’s fairly poseable too. He has various ball joints and hinges and such. Pretty fancy compared to the old MOTU figures. 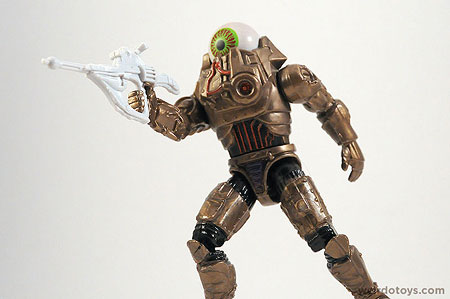 When all is said and done though, the guy is pretty neat. He looks like a steam-punk astronaut or robot or something… with an eyeball for a head. It really seems like a poor armor design to keep your most vulnerable body part completely open to attacks. Maybe Mattel should’ve made a dorky helmet for his eye or a battle-armor contact lens.

Well, Optikk, thanks for justifying the existence of the He-Man toyline. Best of luck with your MOTUC release.