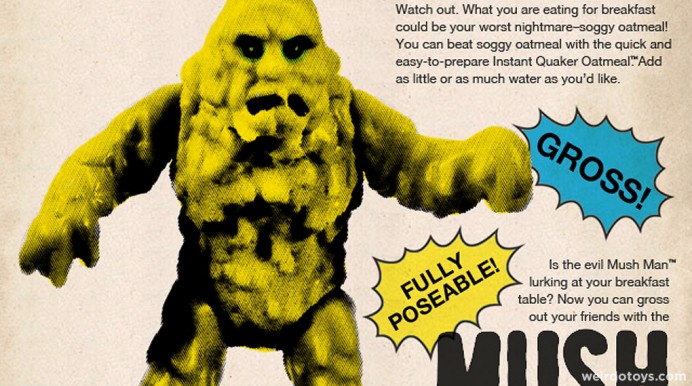 As you might’ve expected, my last blog entry was one big joke.

Most of you immediately realized Quakor was a gag, and the few of you that did fall for it, I’m thrilled. Thrilled not only that you’d trust me, but also by the fact that my Photoshop skills fooled you into thinking you were looking at an actual toy.

Quakor isn’t a custom (in the traditional sense). He’s just a Photoshop job.

My original intention for the gag was to reveal Quaker Oats had sold an Oatmeal Monster toy at one time. That probably would’ve been believable. But as I searched for vintage Quaker Oats graphics and packaging, I stumbled upon an old Quaker mug. This when it dawned on me that I should be doing a figure along the lines of Wonderbread He-Man.

After collecting a few Quaker mug pics, I was able to take photos of a Prince Adam figure and just fake the new mug-head onto the real MOTU body. It kind of forced me to use odd angles and lighting and took some effort retouching, but I think it worked.

As far as the order forms and inserts go, that was just my trying to emulate old 8os mail-away forms and comic book ads.

I felt the need to include those just to “sell” the validity of Quakor and Mush Man that much more. I even put a false watermark on the Mush Man ad to throw you off. Heh.

It was a lot fun and worth the effort.

I hope you enjoyed it.