Here we go again! Another series of Madballs to follow up the rebirth from last year!

Basic Fun has really dropped the ball (no pun intended… seriously) on the latest series of Madballs. The first series really looked great, but it looks like they intentionally sucked the life out of these classic characters. They’re not nearly as cool as I remembered. Look at this crap.

Dirty Devil – Not as much dirty as he is a devil.
(Click to enlarge)

Blood Bulge – He has a huge blood blister bulging from his eye socket. What else can ya say?
(Click to enlarge)

Lace Face – A sewn-on kisser only a stepmother could love.
(Click to enlarge)

Evil Knievel – Bruised, beaten, and by the looks of it – undead.
(Click to enlarge)

Ugly Ball – His laugh will drive you Bonkers!
(Click to enlarge)

Alright. Ya got me. I’m just kiddin’. These aren’t Madballs at all. They’re some scraggly-ass 80s Madballs bootlegs… and they’re great 😉

As most of you know, in the mid-80s, the Madballs were hugely popular. It all started simply enough with the foam rubber balls, but Madballs didn’t stop there. They pushed the Madballs brand into even more categories: mini-action figures (which will actually find their way to this blog eventually), wind-ups toys, stickers, coloring books, etc. You name it, it probably had a Madballs logo on it. They even made a cartoon! (Luckily, I never saw it, but that won’t stop me from showing it to you 😀 )

Of course the success (and overkill) of Madballs merchandising wasn’t overlooked by no-name toy manufacturers. You know the routine. You see something is a success, so you do your best to ride its coattails. That’s where these hideous things come into play.

In general, all of these bootleg balls are pretty bad, but they do have some distinguishable differences that helps them stand-out from your typical Madball. Firstly, they’re plastic instead of foam rubber. Secondly, as far as visual style goes, the details aren’t there. Compared to the real thing, the actually designs of the toy sculpts are less developed, and the paint applications are a lot more minimal and sloppy. But, it is their bad production value that lead them hear in the first place, so I guess I should stop trash-talkin’ ’em. I have no clue to who made them. All I have are markings marking that read “Made in Taiwan.”

Of the handful of bootlegs balls I have, I really like the goofy devil guy the most. He just seems jovial or jolly or something. It looks like he’s an early 1900s circus announcer. Ya know, something like the Ringling Brothers.

Also, the ball I’ve referred to as “Blood Bulge” is actually kind of gross. He has a huge blood blister bulging out of one eye socket and has blood-coated teeth. At a primal level, he’s actually much grosser then the latest Madballs (mostly because the modern Madballs toys use slime instead of blood. Buncha wusses). 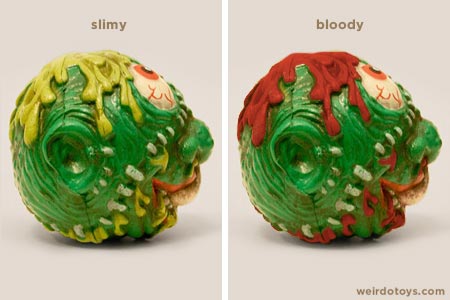 During my search for generic bootleg Madballs, I came across a bit of info of one of our ugly friends. It appears that last ball listed is actually a bootleg of a ripoff. It looks a lot like a toy called Ugly Ball which was created by Bonkers! candy in the 80s to cash in on the craze without really getting AmToy involved. Instead, they made their own horrible, horrible ball toy. Here’s a look at the old Bonker’s Ugly Ball commercial.

As a side note, how I obtained these bootleg Madballs is kind of a goofy story. Over the past several years, I’ve been designing a bunch of CDs and stuff for German industrial-rock band, KMFDM. Well, during that time, I’ve befriended their Production and Marketing Manager (I’m just guessing at his title), Brent. Brent knew about my site and my dorky interest in weird toys, and at some point, he stumbled upon his entire twenty-year-old Madballs collection. Luckily for me, he decided to generously send it to me… including the goofy bootlegs. Thanks Brent!

So, anyone else have any goofy Madballs bootlegs? I know darn well I saw more of them as a child. Share ’em if you got ’em.