So, here we have Snack-Attack Spider-Tron (that’s what you get when you cross snacks with Spiderman and Tron obviously).

I found these pics by searching “Weird Spiderman” and “Weird Tron.“

I found this guy at the York Toy Show too. Funny thing is, I’d never seen this toy before in my life, but for some reason, at this show, I saw at least 4 or 5 of him at various vendors’ tables. I guess old Power Rangers toys are more common up north or something. (I was just guessing it was a Power Rangers toy. It sure looks and acts like one.)

As I’ve mentioned every time I’ve posted one of these MMPR monsters, I’m not a fan of the show at all, but I’m willing to admit, the villain toys are pretty cool/freaky/goofy.

This guy really grabbed my attention, because he’s a cool-looking, semi-realistic depiction of a spider in action figure form. It’s as if whoever made this figure heard the term “Spider-man” and took it literally. Look at him. He’s a a bulbous, furry, humanoid spider man, with eight hinged, red-spike-tipped arms/legs and a creepy, fangy, spidery face.

And nothing complements nappy, brown fur and red spikes like that big, green and yellow protective shell.

Not only that, but he comes equipped with “spider-hug action!” There’s a trigger on his back that, when pulled, controls the top six arms to flex and grab at whatever unlucky teen in a vibrant-colored jumpsuit gets in his way.

As I mentioned previously, I didn’t know what this toy was, but a quick glance at his feet soon revealed that I was on the right path. His markings read ©94 Bandai, which basically meant he was a Power Ranger (or Beetle Borg) toy. So, a few minutes on Google, and voila! I had the culprit’s identity. I soon discovered his name was Spidertron (actually, too be more specific, it’s “Snatch-Attack Spidertron,” but you already knew that). With a name like that, it sounds like he should be a robot or something. 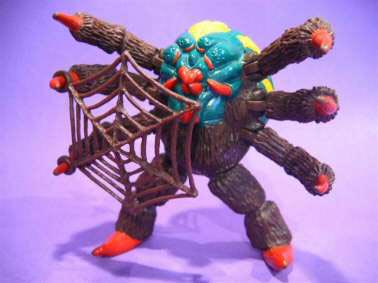 Looks like the toy originally came with a big web shield doohickey. 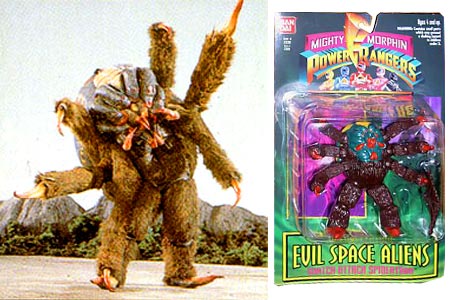 According to sharetv.org, in his introductory episode, “Itsy Bitsy Spider,” (Aired Oct. 12, 1993) – “Rita switches out a Forrest Spirit Statue from Angel Grove park and replaces it with her own- one which holds her latest Spidertron monster inside. He puts a sleeping spell on the entire town of Angel Grove, putting everyone but Zack under a deep sleep, leaving him to face Spidertron alone.”

A sleeping spell? Lame. He should’ve just covered the town in spider webs. Better yet, he should’ve wrapped up the Power Rangers and sucked their blood dry.