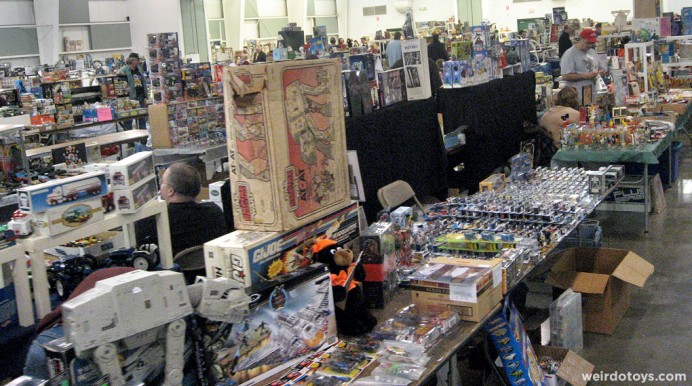 A few years back, I discovered the Greater York Toy Extravaganza – a huge toy show which takes place Thanksgiving weekend in York, PA. Each year the show is packed with everything – 800 tables of modern stuff, vintage stuff and even historical stuff. Plastic crap or diecast metal crap. All types of toys for all types of people. Of course, I’m looking for the “weirdo” stuff. 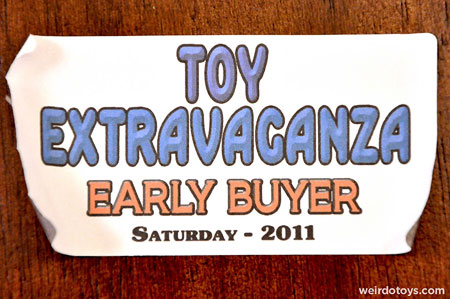 I said it in my 2008 and 2009 York Toy Show articles and I’ll say it again – the trip is soooo long and challenging for me. I’m in South Carolina where there are no real toy shows, and if there ever were, they would involve NASCAR most likely. This trek to York is definitely not worth it financially, and yet, I’m compelled to go. Is it the intrigue of the mystery toys yet to be discovered? The miraculous great deal I may find? Or more realistically – the annual invitation I get from my father-in-law to join him at the toy show (thanks Monty). 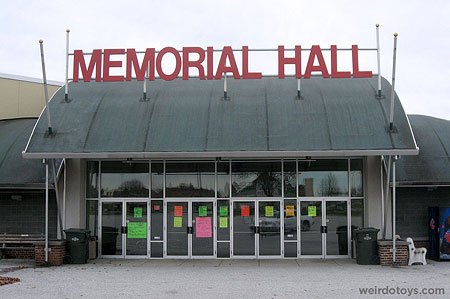 I think Monty and I have learned our lesson over the years not to drive up to Pennsylvania as early and waste so much or our precious holiday weekend. Being the two toy-obsessed family men we are, we devised a plan to minimize the pain of the long-ass drive and wasteful stay in Pennsylvania. The plan of attack this year was get up super-early Saturday morning, drive up to PA and arrive in time for the dealer’s early buyer’s admission that evening. The next morning, we’d do early buyers again and then hit the road just before the show opens to the public. (These “early buyers” admissions will cost ya $20, so only consider if you’re serious… or if you write your own toy blog. Ha.)

(The plan worked perfectly. The only thing is, with such a rushed timeline, I was more interested in scoring some weirdo toys and less concerned about taking photos. You’ll notice my actual documentation of the toy show floor is pretty sparse this year. Sorry about that.) 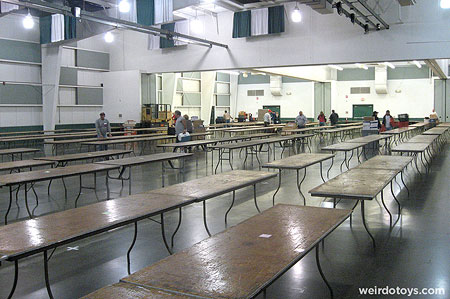 On Saturday night we got in at the same time as the dealers. This is good and bad. It’s good, because we get first dibs on toys as dealers set up. It’s bad because not everyone actually sets up Saturday night, and definitely not everyone wants us hanging around, pestering them, as they unload their boxes.

Here’s a peak at what I picked up the first night. 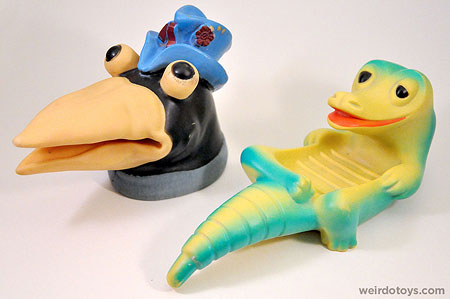 Some funky-looking crow puppet and an alligator soap dish…

This small haul worried me a bit for the potential of the show. I knew some of the vendors hadn’t set up, so I was hoping they’d surprise me on Sunday.

At one point in that evening, as I stumbled through the show Saturday night, I literally did a double-take when I saw this super-cool, black skeleton warrior-type guy standing at one of the dealer’s tables. 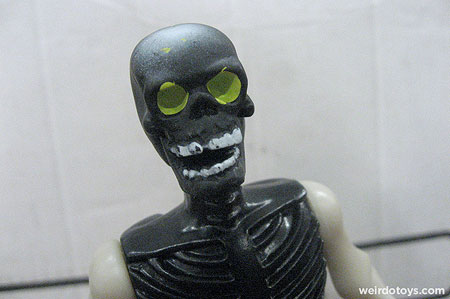 I know I’ve seen him before. Was this some random bootleg? 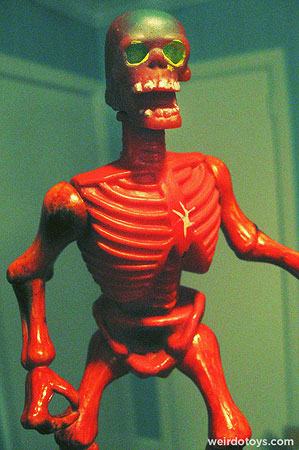 Oh yeah! He’s a direct copy of the skeletons from the Pirates of the Galaxseas toyline. 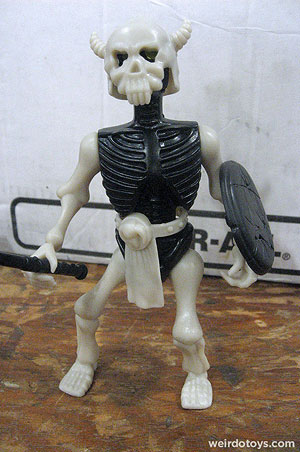 At least this bootleg has some cool, new accessories.

As it turns out, this figure is an in-progress prototype of a toyline the guys at ZoloWorld are putting together. It’s called Warlords and Warriors.

The line is more-or-less a throwback to the countless Masters of the Universe knockoffs of the 80s we all know and love. It’s so much of a throwback in fact, I think this is a direct recasting of the original molds by “Emco-Ray” (using pig latin to hide a keyword here). I guess he is a bootleg – a bootleg of a knockoff?

The characters may look familiar but they’ll be given a new storyline with all new accessories and paint variations and stuff. Looks like a lot of fun. If they don’t cost $30 each, I may pick some up!

Alright. Back to the rest of the show…. 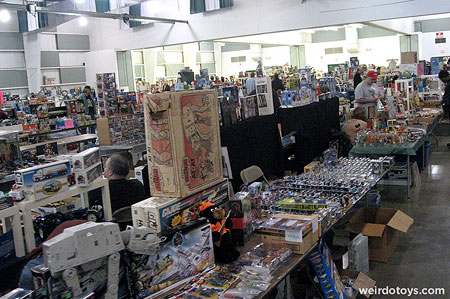 The next morning, Monty and I got in a couple hours before the show opened to the public. I know it doesn’t seem like much, but trust me, walking the floor with a bit more ease and ability go back and forth and just take it all in without the rush of the crowd makes the shopping so much easier. 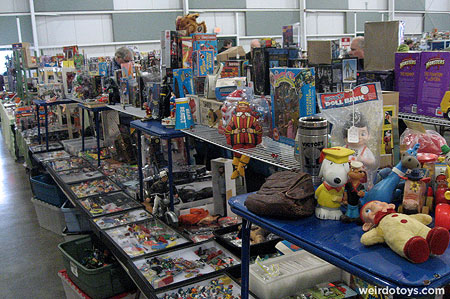 Not only that, but you get first dibs. So many times I see dealers buying from one another. So as the general public, you will never see some of the toys or even have a shot at getting them for a fair price. I’ve seen dealers buy something cheap then double the price and sell it at their own table. It’s just nice to have that “insider’s” edge when doing your toy hunting.

I won’t give you a play by play of Saturday. But here’s a quick look at what I picked up that day. Sure it’s nothing mind blowing, but i like it.

First up, we have these clunky, vintage wind-up robots. They don’t really work, but I just got them to look at anyway. Heh. 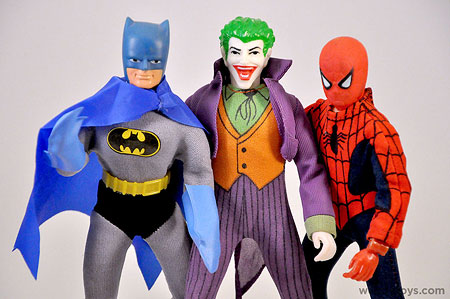 Next we have the super-classic Mego figures. I know there are repro parts on ol’ Bats here, but I don’t care. I don’t have any Megos, and just having a few of the classic figures is good enough for me.

Next we have these cool, little minifigures. Seems like a mixture of sci-fi and fantasy creatures. I haven’t bothered to get the story on these guys yet. 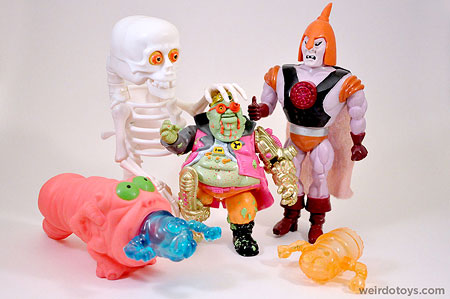 Here we have some of the always-awesome Real Ghostbusters’ ghosts along with a Toxic Crusaders bad guy and a villain from Blackstarr. 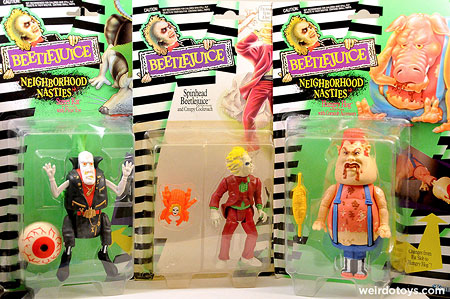 Lastly we have a few carded Beetlejuice toys. I know no one gives a crap about Beetlejuice toys, but I liked these two “Neighborhood Nasties” figures. The street punk transforms into a rat and the hillbilly fat guy turns into a pig. I’d never seen them before, and I hear they are pretty uncommon. I also got the classic Beetlejuice figure with a spinning and shrunken head. So that’s good 😀

I know my pics from the show are lacking, so just to give you a sense of what the show feels like, here are the videos I created for the last York show I attended. Not much has changed. In fact, a lot of the dealers are selling some of the same toys as they were 3 years ago. Sad really.

So there ya have it. The annual contradiction of the Greater York Toy Extravaganza –  a show that excites me enough to drive 9.5 hours to see but also the show that forces me to take a 12-hour drive home in post-Thanksgiving traffic, staring at the unnecessary additions to my ever-growing, plastic, weirdo army giving me ample time to rethink the entire trip. 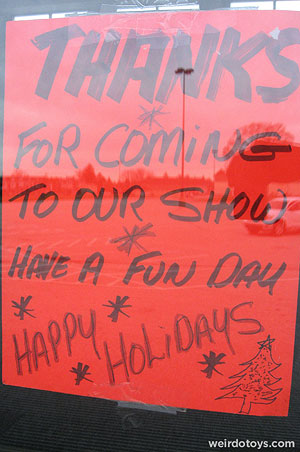 Would i do it again?

Maybe next time I can meet up with some fellow bloggers who happened to visit the show this year as well. (Read about their adventures at CoolAndCollected.com and at TheSurfingPizza.com.)

Until next Thanksgiving… keep it weird.