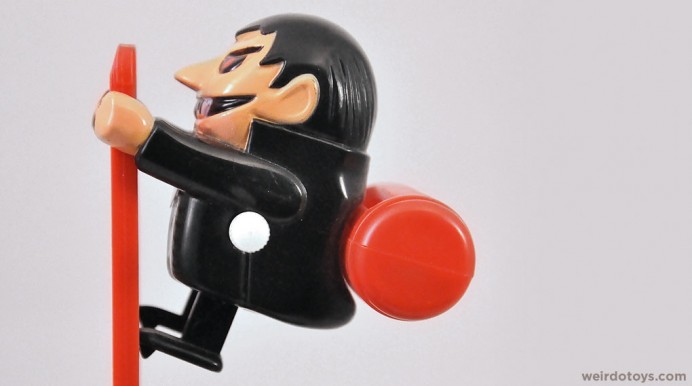 You know what? I’m not the all-knowing weirdo toy guy you think I am. Sometimes it’s you guys who introduce me to cool, weird toys. 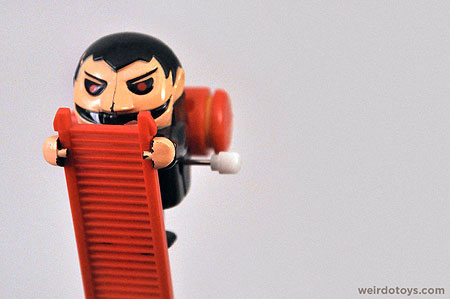 Like this guy for example. I never knew he existed.

This little gem of a toy came to me from a new virtual buddy of mine, Michael Bukowski. He’s the author of an awesome toy blog, Blarghhh Spot, dedicated solely to balls. Not just any kind of balls… mainly Madballs and other related bootlegs and knockoffs. You should definitely check it out.

Mike actually contacted me months ago proposing a toy trade (I always like getting those kind of emails). 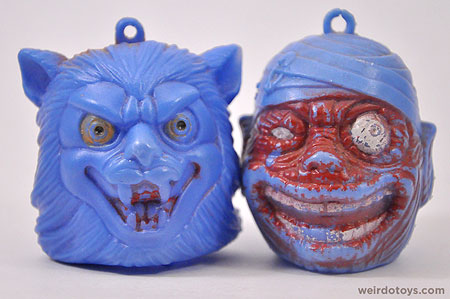 Among the photos, I was really drawn to these awesome monster head things (I have no clue what they are, but they may appear again in a future blog entry)… 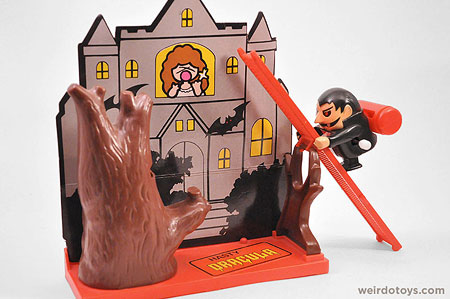 I immediately fell in love with the vintage manga design style. Not only that, but with a peculiar name like “Hasty Dracula,” I had to have it. I decided to trade. Luckily for me, I had some rare balls on hand.

I had these horribly ugly mini-sadballs in my possession… 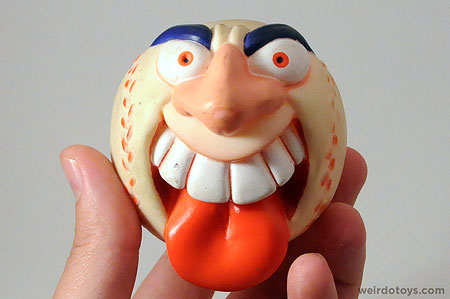 … and I just happened upon a rare, plastic, water-squirting Screamin’ Meemie Madball while I was in South Africa.

Hasty Dracula would be mine. I was already pretty excited to get the toy/bank, but I didn’t know how great it was ’til I saw it in action.

I’ll let you see it for yourself.

I love how the bank is like a characterized Rube Goldberg device. You don’t just drop the money in the coin slot. That’d be too simple and no fun at all. 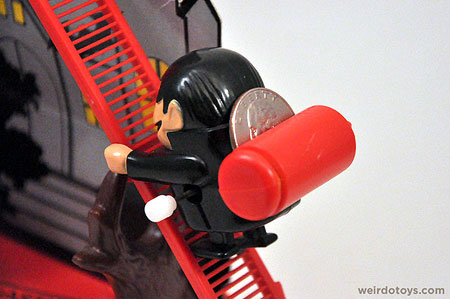 You actually drop a coin in Dracula’s back (notice the giant, red syringe – weird)… 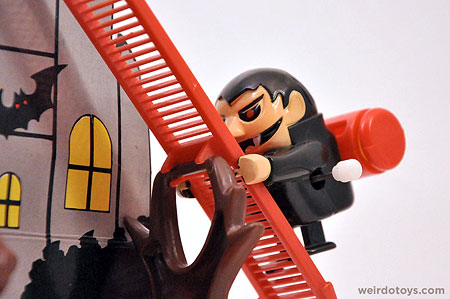 … wind him up, and wait as he climbs his ladder… 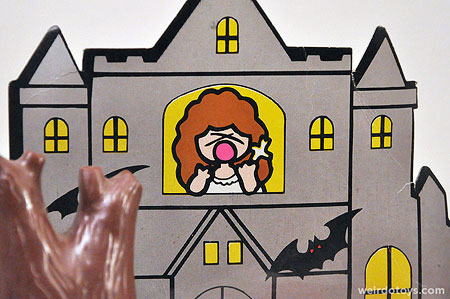 … to undoubtedly accost his next victim.

Luckily for the lady, when Drac reaches the top of the ladder, he loses his balance and falls into a tree –

Depositing the coin into a slot in the tree.

What an awesome way to save a quarter.

For the small size of this bank (approx. 7″ tall), the automation is surprisingly accurate… and painfully slow (that’s why I jazzed up the video). 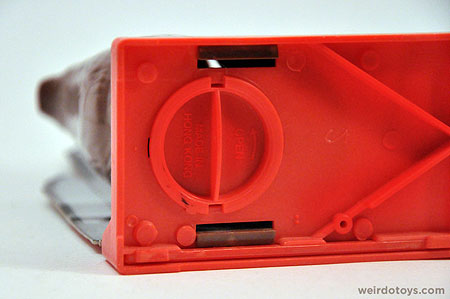 And once the bank is full, there’s a removable cap on the bottom where you can release all 6 coins you’ve saved. Ha!

There are a couple of drawbacks to this toy I’d like to mention. The first is the fact that I can’t remove the Dracula figure from the ladder. He’d be a cool little standalone wind-up vampire toy, and he’s forever imprisoned on his ladder. Unfair. I’ve tried prying him off that ladder, but it feels like I’ll break his arms if I push it much more. Damn. 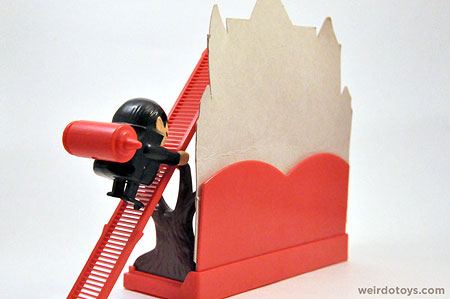 The second drawback is the fact that the diorama is basically a thin piece of cardboard. I like the drawing, and it totally sets up the story, but I’m still disappointed. It’s kind of like the feeling I had as a kid when I saw that Cobra’s base was a glorified piece of cardboard. 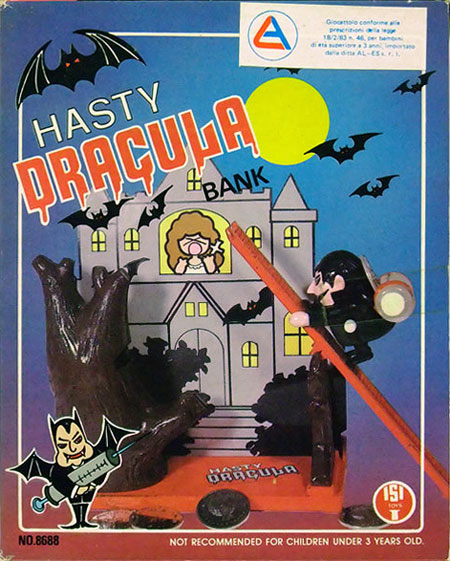 Oh! Here’s a packaging pic I swiped from Tons-of-Toys.com. According to their site, the bank was released in the 80s by Toplay TPS Japan and distributed in Italy by ALES. (Dracula actually looks a bit like The Count from Sesame Street in that pic.)

In closing, I’m still left wondering why Dracula doesn’t just transform into a bat and fly to the window. It’d be a lot quicker, stealthier and a less painful landing. In fact, isn’t this approach the opposite of hasty? It takes time and effort to locate a ladder, set it up and climb up to the window. Not only that, but is he actually going to draw blood from her with that syringe instead of biting here? Maybe he’s not a vampire at all – just one of those goth, poseur wannabes! If that’s true, it makes this Dracula more of a knock-off Dracula. Perfect!