It’s Halloween! What better way to celebrate than by featuring a horror movie icon on the blog (ooohh scary). 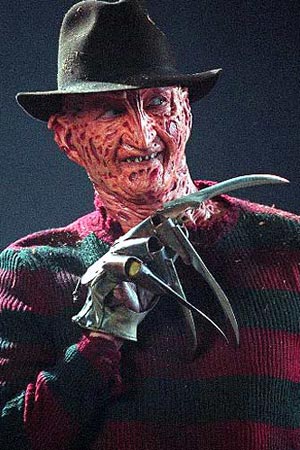 (The little guy has a pretty good likeness of actor Robert Englund, huh?)

Here we have A Nightmare on Elm Street’s Freddy Krueger. Freddy toys have been around as long as I can remember, so featuring one on the blog may not seem that special. Ah. But remember what blog you’re reading. This isn’t your run-of-the-mill Freddy doll. 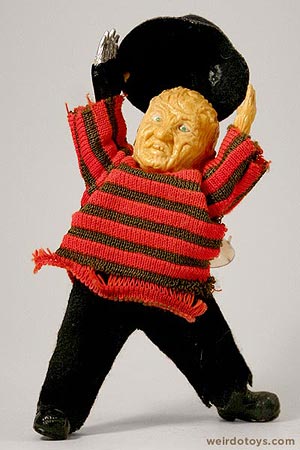 Hold on to your hats!

They’re kind of weird. They look like munchkin Freddys (or is that Freddies?) or the nephews of Freddy (kind of like Huey, Dewey and Louie).

I’ve been sitting on this first Freddy for nearly a year now. I bought it in Charlotte at a toy show last December. I’ve been holding onto it just for this occasion.

And to my surprise, I stumbled across this version of the toy a couple of months ago on a random toy website.

I bought the second one because I noticed some immediate differences from the first one.

Before I get into the differences, there are some general similarities I’d like to mention about these toys. 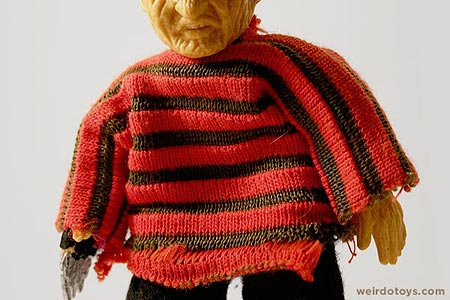 The main thing I immediately noticed was the REAL clothes Freddy is wearing. He’s actually wearing a knitted sweater and cloth pants. Nice.

Okay… on with the differences. Let’s take a look shall we. 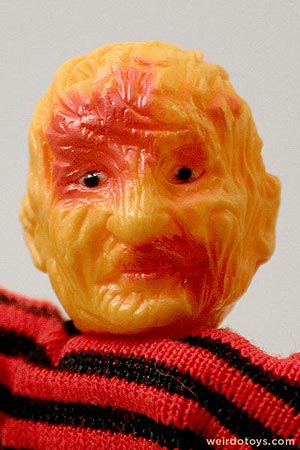 First, we have the face. As you can see, the face of the first Freddy is covered in red splotches. It’s just a sloppy paint application making him look burnt. His skin tone is more yellow-orange too. Also, he’s got those big black irises.

The second Freddy has no red splotches which allows the details of his deformed face to show through, and his eyeballs and irises are actually lightly colored with white and blue. I think this actually makes him look a little more like Robert Englund. 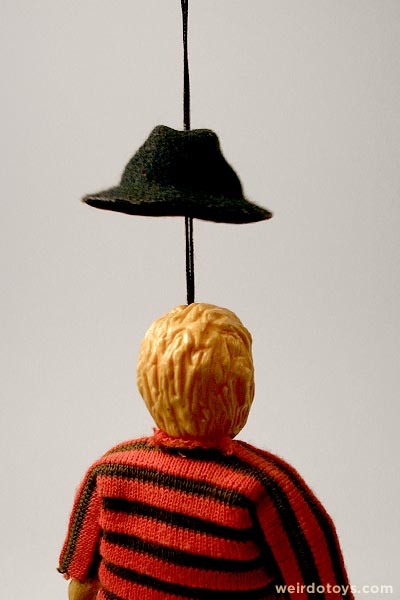 The second thing worth noting is the hanging mechanism of each Freddy. The first Freddy has a string attached to his hat. The stringed hat was glued directly to his head (which obviously didn’t hold very well). But with the updated Freddy, they figured out a smarter way to let him hang and keep his hat on. The string goes directly into his head while the hat hangs on the string by a hole punched through the top of the hat. Pretty nifty. 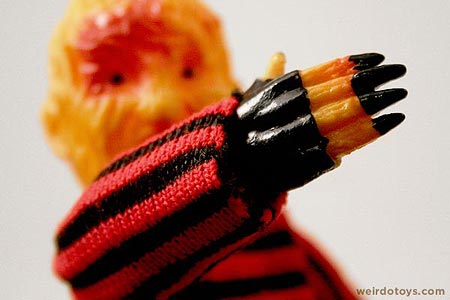 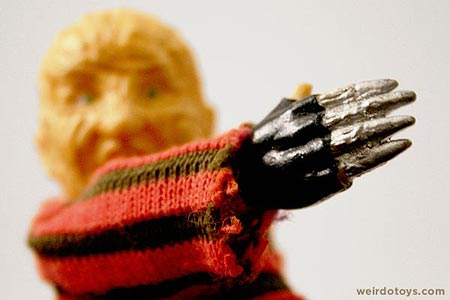 Third, we have the claw. When I bought the first Freddy, I noticed he wasn’t wearing his trademark clawed glove. He was actually wearing a fingerless glove and he had long, black fingernails. I didn’t know what to make of it. Is it a toy made prior to all of the details of the movie or character design being final? I know sometimes toys vary from final character designs becasue of the lead time involved in producing them. Or, maybe this is a bootleg or something. I wasn’t sure.

If you look at the second Freddy’s claw, you can clearly see they knew the mistake they’d made with the first toy. The hand sculpt is still a fingerless glove with fingernails, but the new silver paint job kind of hides that detail. 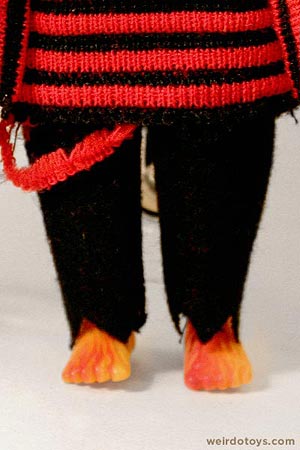 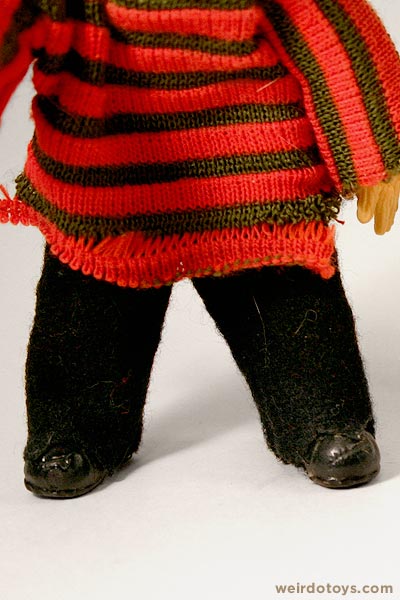 Fourth, we have the very, very goofy difference of a barefoot Freddy versus a booted Freddy. I’m not sure what the hell they were thinking with the first one. Was there ever a scene in A Nightmare on Elmstreet that had Freddy barefoot? Look. He even has burnt little scarred toes.

The second Freddy has worn out boots on his feet. (They aren’t removeable or anything, so please don’t write to me saying the first Freddy is just missing his shoes.) Also, the stance on the second Freddy is a bit wider than the original one. I think it makes the toy a little more “badass,” although they both have trouble standing up (guess that’s why they’re supposed to hang).

And last but not least are the sweater colors. The First Freddy has a black and red striped sweater, but the second has green and red stripes which is more accurate to the character in the movie.

I haven’t seen all the Nightmare on Elm Street movies, but it seems plausible that Freddy could appear in your dreams as this toy in those movies. Something cute and unsuspecting like this could easily crawl from your collection and attack you in your sleep. Watch out!

So where did this toy come from? Who made it? Well, the only info I can find is found on the back of the second Freddy doll. His markings read: (TM) & (C) 1988 The Fourth New Line – Heron Venture All Rights Reserved.

Now that you’ve got “Freddy on the brain,” let’s close this entry out with an old song you may recall (notice the fan-made video).