Typically when I hear the word “Smurf” as it relates to the word “Halloween,” I imagine something disturbing like this: 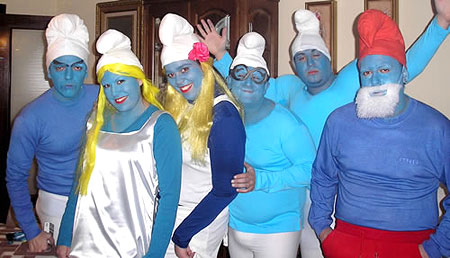 But now, thanks to Schleich, I can now picture this:

Ya know, I never thought I’d see the day when I’d put Smurf PVC figures on my site, but when I discovered these guys a few years ago, I knew their presence here was inevitable.

These aren’t just any smurfs, they’re the outcasts of Smurf Village. When you cross those cute, little, blue guys with classic horror icons, you get an awesome amalgamation of cute and creepy.

Here we have seven Halloween-inspired smurfs depicted as a vampire, mummy, werewolf, jack-o-lantern, grim reaper, Frankenstein’s monster and a ghost. (There’s actually a Smurfette Witch in the collection as well. I don’t like her, so I didn’t get her… so sue me.)

These figures are usually referred to by their serial numbers, so I’ve taken on the task of naming them. 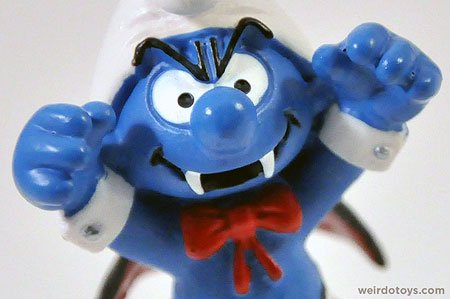 “Bleh! I vant to smurf your blood.” 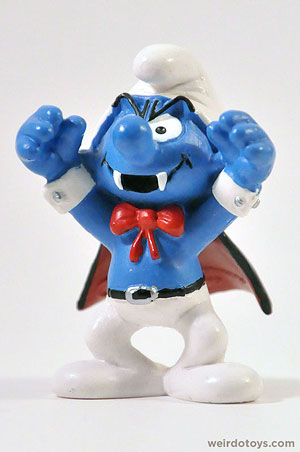 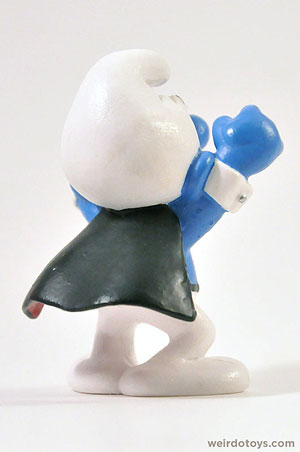 First up is Count Smurfula. He’s an awesome interpretation of the formal, vampire look. The cape, bow, belt and cuffs are all a great way to accessorize a topless smurf’s outfit… and those fangs look pretty fierce too. 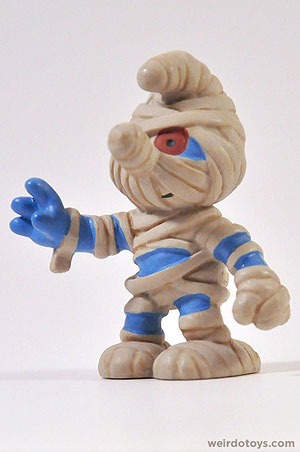 Next is Mummy Smurf. He doesn’t look to old or dried out, but I love his creepy, blood-red eye. I also like how the bandages are unraveling to emulate to the topless smurf design. Looks like they’ve even wrapped his hat. 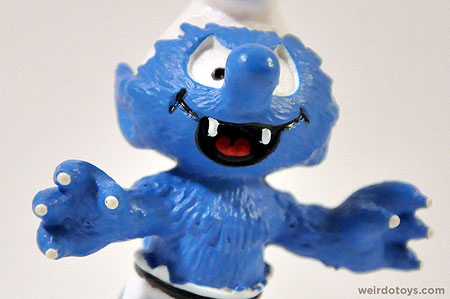 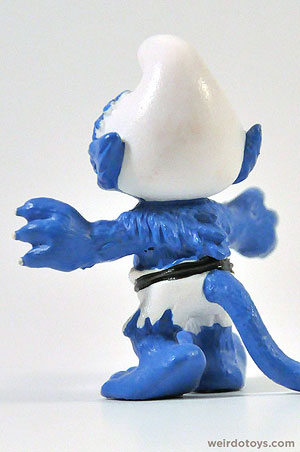 Here we have Weresmurf. What’s cool about this guy is the fact that he’s a furry smurf. That’s pretty rare. He has claws. I didn’t even know smurfs had fingernails. Oh yeah, and he has a belt. That’s bizarre in Smurf world. 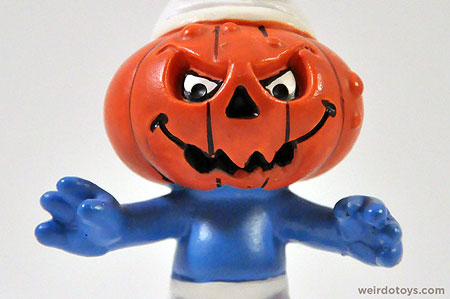 Next is Smurf-O-Lantern. This guy looks to be a regular ol’ smurf with a jack-o-lantern plopped on his head. His hat and body are generic. It’s his monstrous pumpkin head that makes him so great. Wonder if that’s Jokey Smurf under there. 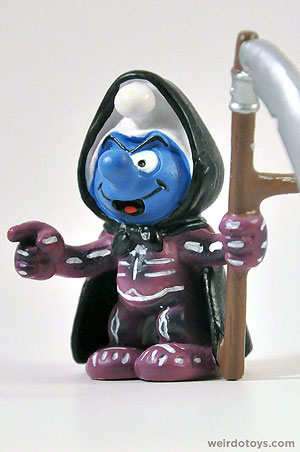 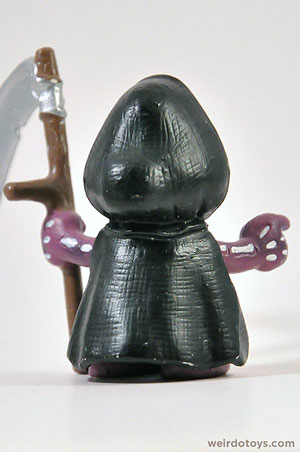 This next guy is a bit weird. He’s the Grim Smurfer – complete with scythe. He actually looks like a smurf wearing a Halloween costume. It’s due to the fact that his body is simply a suit with bones painted on it. A skeleton body smurf would’ve be amazing though. He would’ve looked like an Underworld Warrior. 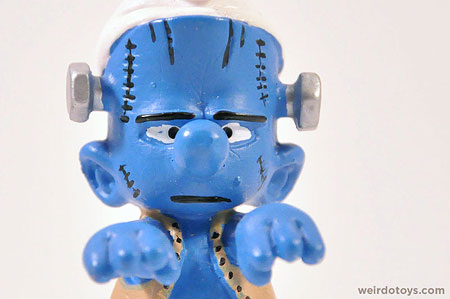 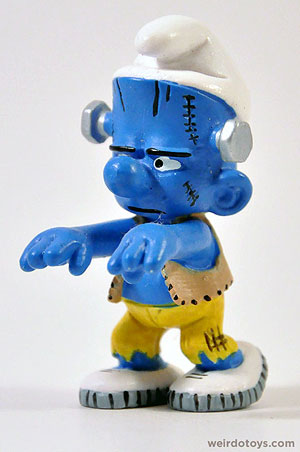 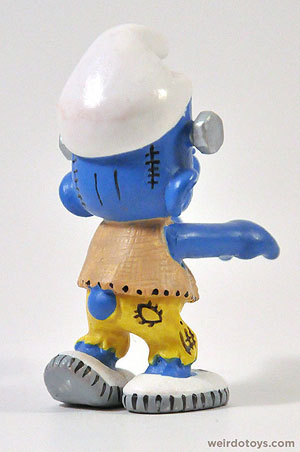 This guys’ great. It’s Frankensmurf. He’s really unique in that he’s got a big block head, bolts, colored pants and a vest (A VEST! his upper torso is actually covered. Wild!) Oh yeah, and check out those platform shoes. 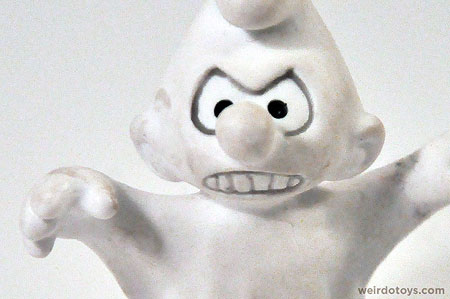 “I ain’t afraid of no smurf!” (poltersmurf that is) 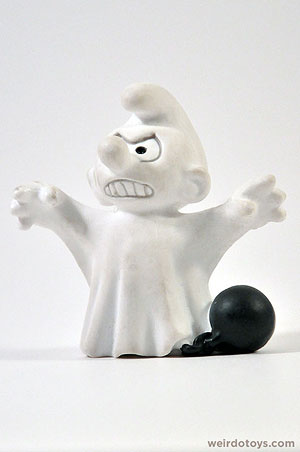 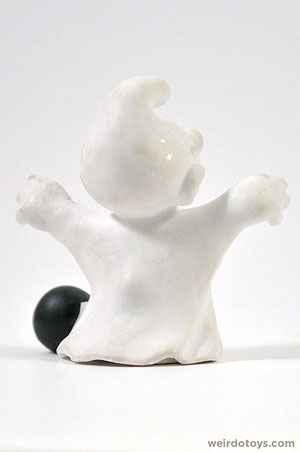 This last guy is kind of scary. I’ll call him Poltersmurf. Sure, he’s a simple smurf with a sheet over him, but look how pissed he is. The rest of these guys look mischevious but fun. This guy looks like he really wants to hurt you. Luckily, he’s being held back by a ball and chain. (Strange. Seems like a ghost wouldn’t be held back by that kind of thing.)

What I love about these guys is how outwardly monstrous and unique their designs are while straying true to the Smurf design. They aren’t just mild variations of the generic smurf (Ya know… a smurf holding a jack-o-lantern or some crap like that). These are nice, uniquely sculpted monstrous incarnations of everyone’s favorite little blue guys. Now you have no reason to not have Smurf toys on your desk.

(Unfortunately, these Halloween Smurf designs were retired in December of 2008, but I think you can still find them fairly easily online if you want them.)