So, I’ve finally gotten around to the blog again. Sorry about the delay. I know a lot of you have been eager to see what I picked up at the York Toy Show. 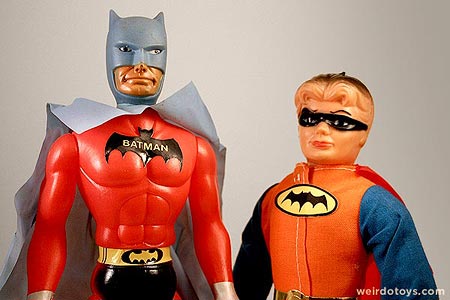 I was just strolling the aisles when these horrible, barbie-doll-sized bootleg superheroes looked up at me through a glass case. I could hear them in my head simply saying “save us.” I had to rescue them.

I asked the guy who sold them to me where they came from, and he just said he got them from some storage warehouse in New York. Apparently it was being cleaned out (and it was filled with a bunch of crap like this). He also said these toys were from Hong Kong. They look like they’ve been packed away for a while. Maybe it just looks that way because of the stained, water damaged packages, crinkled capes, etc. There were several of these toys at this guy’s booth. I had to dig through ’em a bit to find the ones with the least paint damage. Most of them had all the paint chipped off and stuck to the bag. 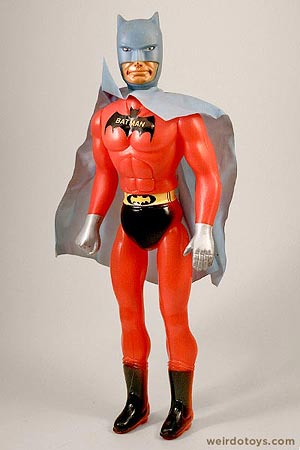 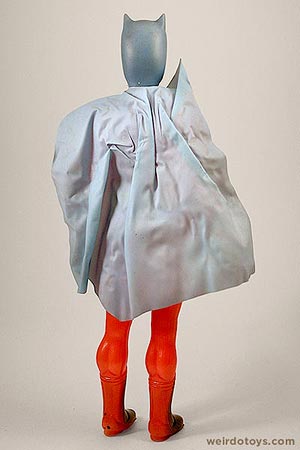 This appears to be Batman. All I have to say is, it must be laundry day at Wayne Manor. His bright-red long johns crack me up. They’re not nearly as scary or stealthy as he’d like them to be. His cape and cowl actually seem to be color accurate, but it looks like they were just pulled them out of the laundry hamper. The cape is just so deformed and super-crinkled. Ha! I love it. 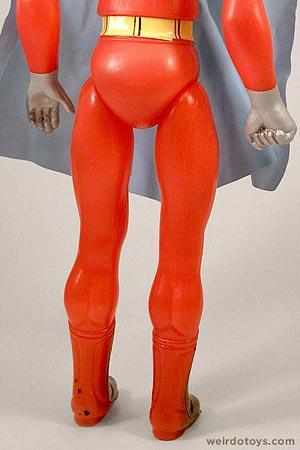 Also, look at his feet and black underwear. They’ve just been sprayed on the front with no paint on the back. Cheap. 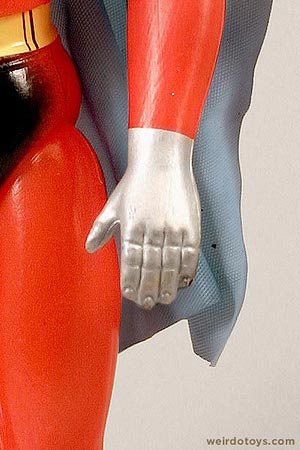 Looks like he didn’t have any clean gloves either. Batman has actually resorted to painting his hands silver. It’s definitely not a glove. You can see every fingernail, knuckle and crevice of his hands. 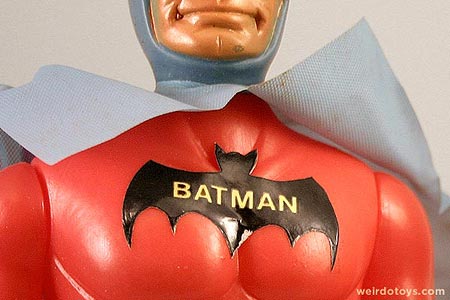 The bat logo sticker on his chest is a lot more of a “realistic” depiction of a bat than his traditional stylized logo AND his name is written on it. BATMAN. Is this there to clarify to the bad guys who he is? I guess when you show up in your red pajamas, you might need some way to remind them.

Also, isn’t the purpose of most bootleg’s screwed-up name and appearance to avoid legal issues? If so, why clearly call the guy “Batman?” Call him “Bat-Hero,” “Super-Bat,” “Acro-bat” or even “Man-Bat.” (Oops. that one’s already taken.)

Look at the drawing on the Bat-package. It looks a bit like a “legit” Batman image, but he’s all mangled and awkward. His legs are deformed and broken, and it looks like his fingers may be too. I also like the arbitrary cross-hatching on his cape. This bootleg comic artist must’ve found some piece of art and filled in the missing pieces himself. The thing just looks funky. 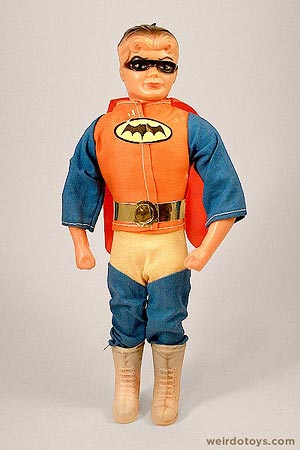 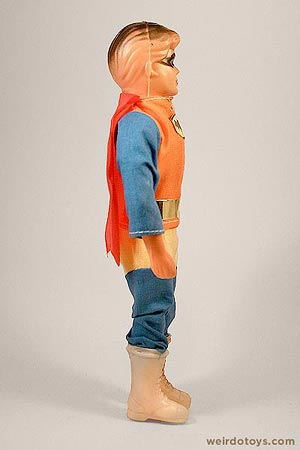 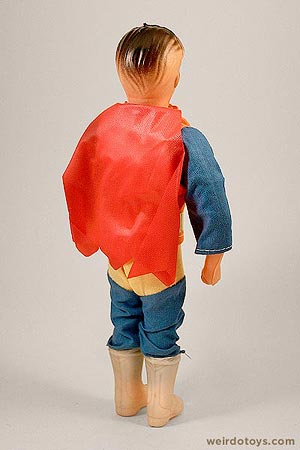 Next we have Space Flyman, who looks a lot like Robin. Now this is proper bootleg etiquette – messed-up name, messed-up colors, but still similar enough to the original to know who the character is supposed to be. 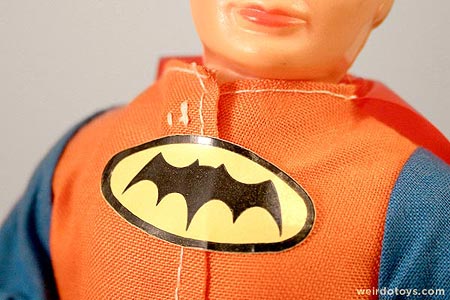 Why else would the Space Flyman have a bat logo? It’s just a clue to this guy’s origins.

He is Robin I guess, but his outfit is a bit wrong. Outside of the color inconsistency, he should be wearing a little vest, some undies, and little shoes. Instead, he’s wearing long sleeves, long pants and combat boots. Oh wait. Maybe it’s because he has no clean laundry either. Dang. I hadn’t thought of that.

Unlike the Batman figure, he has real clothes and boots. Kind of surprising for such a crummy toy.

There were a couple of color variations of this Robin toy. I don’t quite recall what colors there were, but I chose the orange shirt version. He looked best next to the red Batman. 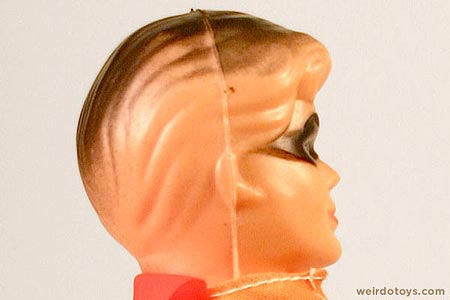 You can also see the cheapy paint application on his head. Just that small fuzzy streak of black.

(Robin has a very difficult time standing by the way. I actually had to use a bit of tape to keep him up.)

This Space Flyman toy looks funny and all, but it’s actually the card on his package that gave me the biggest laugh. I find the illustration on the front of the card charming. It looks more like a member of G-Force beating up chubby members of Cobra.

But when you flip the card over, that’s where the hilarity ensues. It reads:

Space Flyman: Here is a powerful and wonderful man. Also a good fighter beats off any opponent with his strong muscles.

So he “beats off” bad guys with his muscles? Sounds challenging (and kinky). I’m not sure what kind of message that sends to kids. I’m sure it lost something in the Engrish translation 😉

Hey. You know what I just remembered? I got some Batman and Robin toys last year too… at the Allentown Toy Show. Maybe this is the start of a new tradition.

As Bubba Shelby pointed out, this Batman bootleg bears a striking resemblance to the Batman of planet Zur-En-Arrh. I have no idea what’s going on in this panel. It’s just a glimpse into the old and odd DC Comics Universe. Read more at Planet Zor.