It’s quite rare to find Masters of the Universe knockoff figures nowadays that no one has ever seen or heard of. Well, I take that back actually. There are countless He-Man knockoffs and bootlegs that no one has heard of, but I’m more specifically referring to all you “hardcore” collectors out there. You pretty much have the M.O.T.U.-inspired toylines covered I think.

That’s why I’m particularly proud to unveil this peculiar guy. 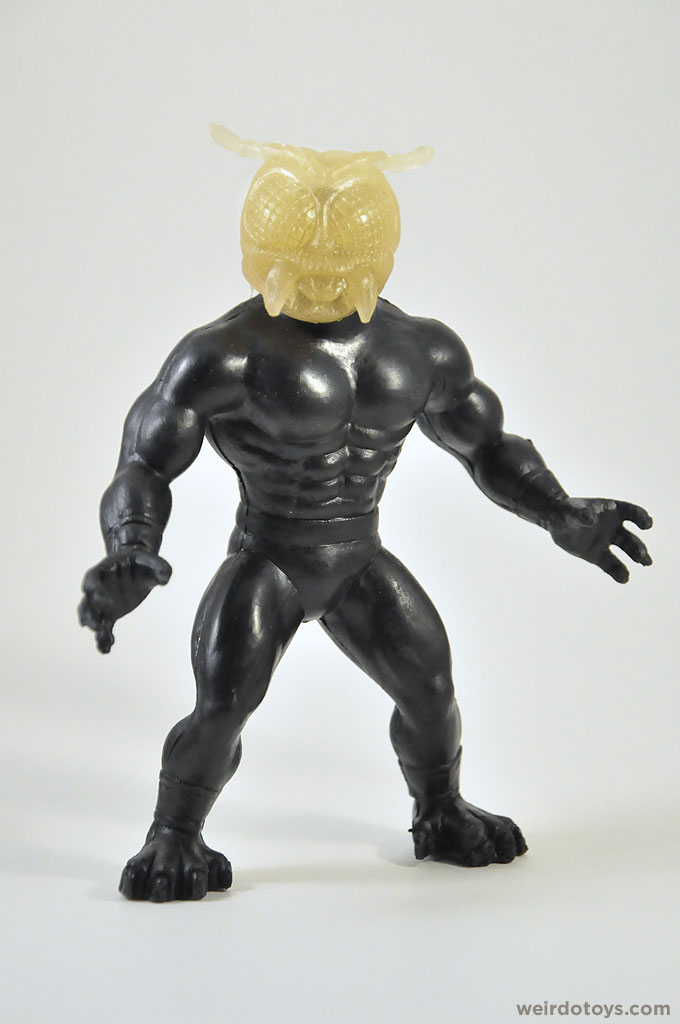 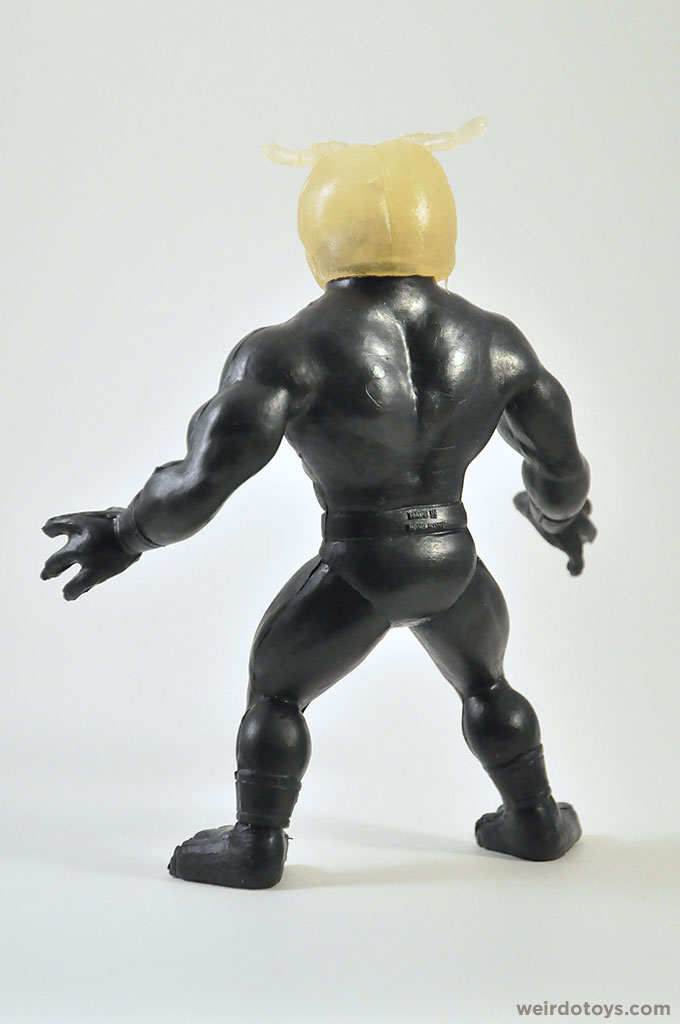 He also has a bunch more heads.

Cool huh? Well, it gets even cooler.

The detachable heads glow in the dark! 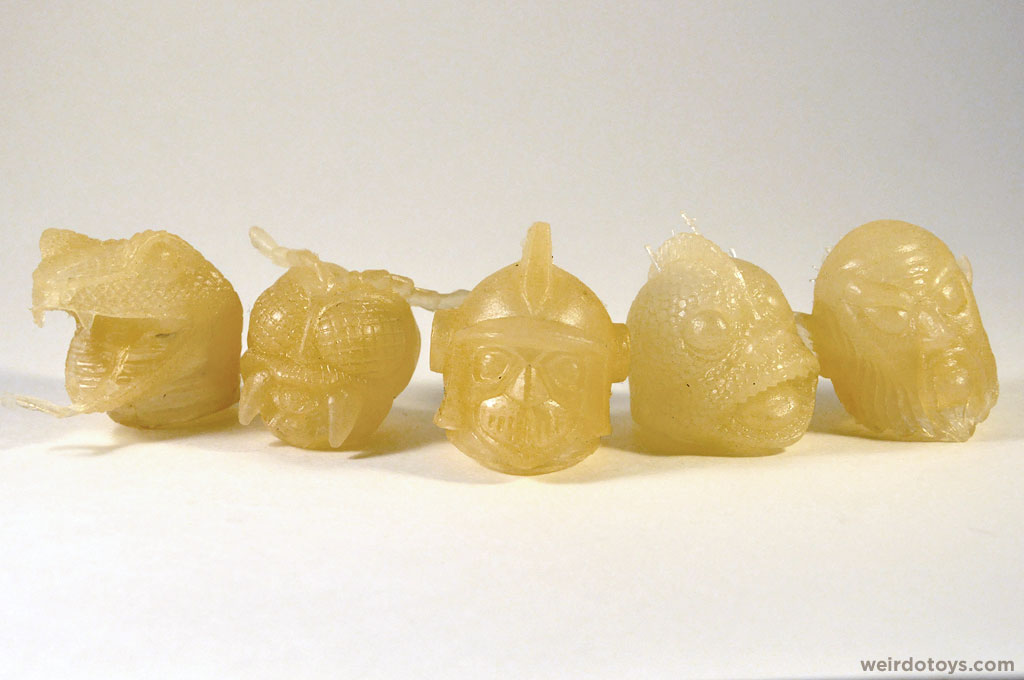 He has a total of six heads that have been discovered (more on that later). I only have five of them.

So that means we can turn our well-muscled, 4-fingered and 4-toed warrior into all sorts of characters. 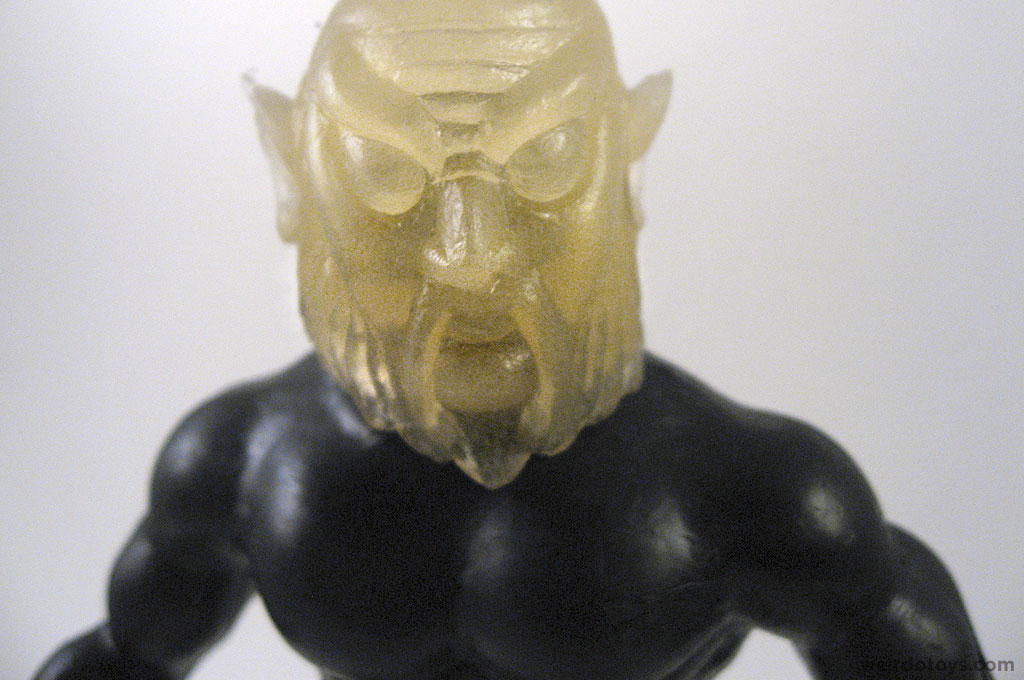 We have the snake-head guy. Let’s call him “Snake Face.” 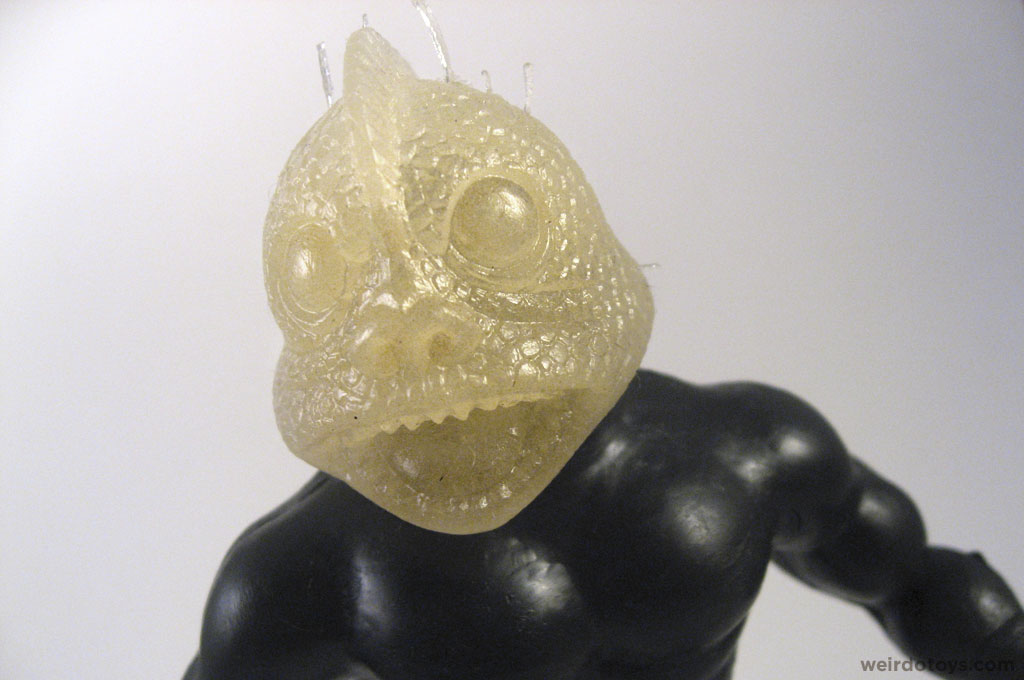 We have a fish-faced kind of guy. Lets call him “Sal Mander.” 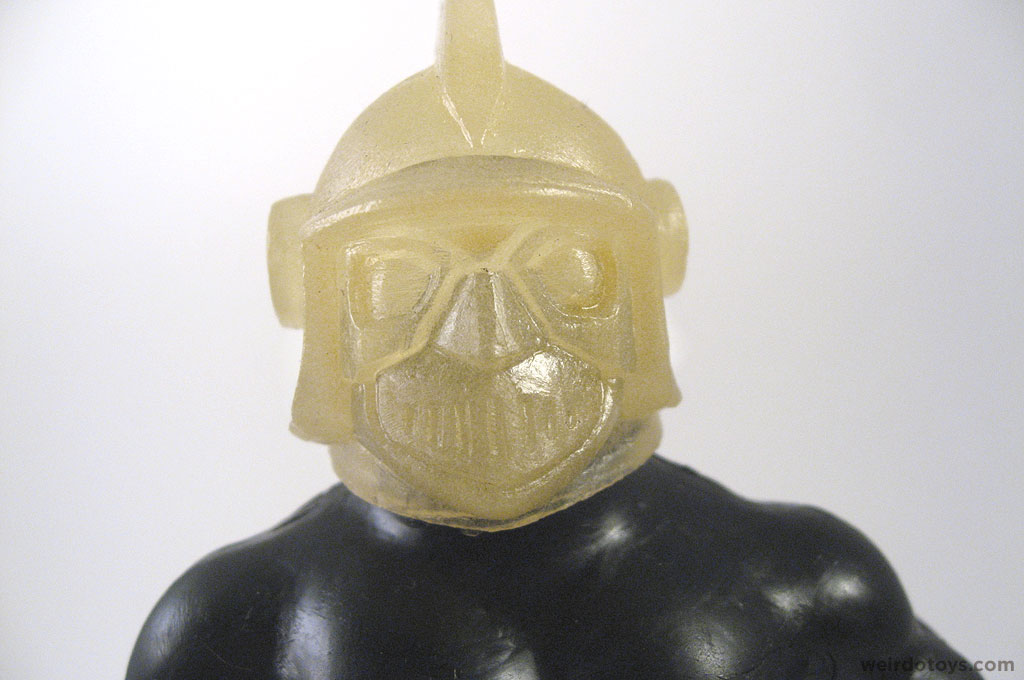 Next we have a doofy-looking robot space knight, “The Galactic Knight.” 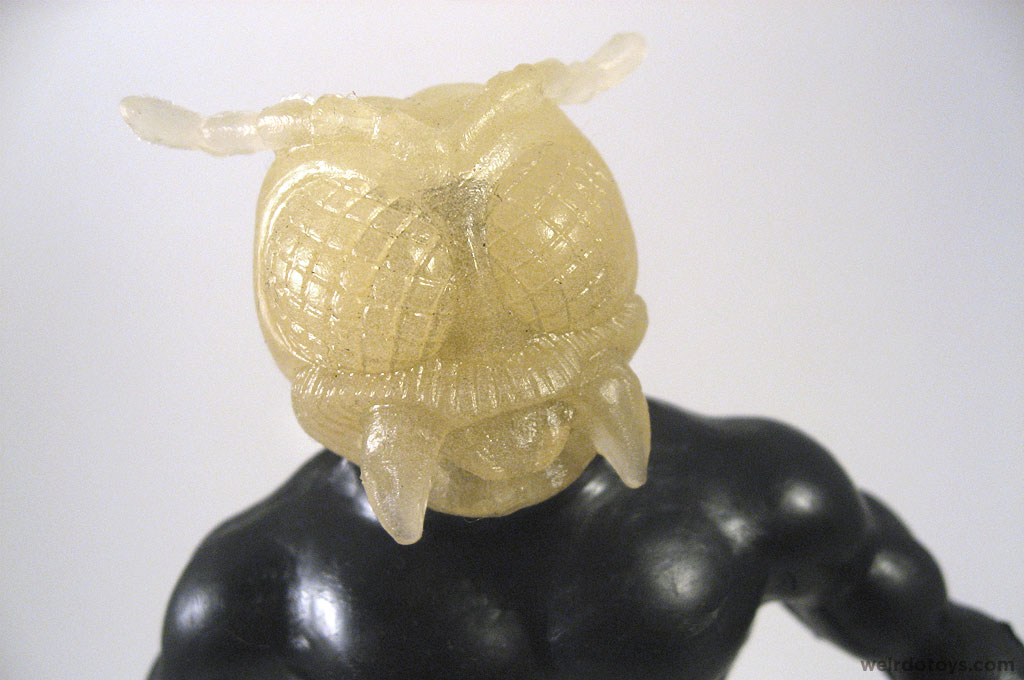 Oh, and the fly head guy. Once of my faves! Let’s just call him “Jeff Goldblum.”

What the hell is this thing, and who came up with it… and will you marry me? Ha!

Beyond its scarcity and absurdity, what impresses me most about this figure is its production value. This isn’t your typical knockoff figure that’s poorly produced. It’s actually pretty well-sculpted and well-made and surprisingly not just recast pieces from the same body and head sculpts we’ve seen 100 times over.

The body is a generic rubber body. It is just a solid piece of rubber basically. No articulation or bendy-wire-armature abilities. Just imagine the consistency of those old LJN wrestlers of the 80s.

The heads are a translucent yellowish rubber. The only bad thing about the heads is the color makes it difficult to discern all the awesome details in the head sculpts. 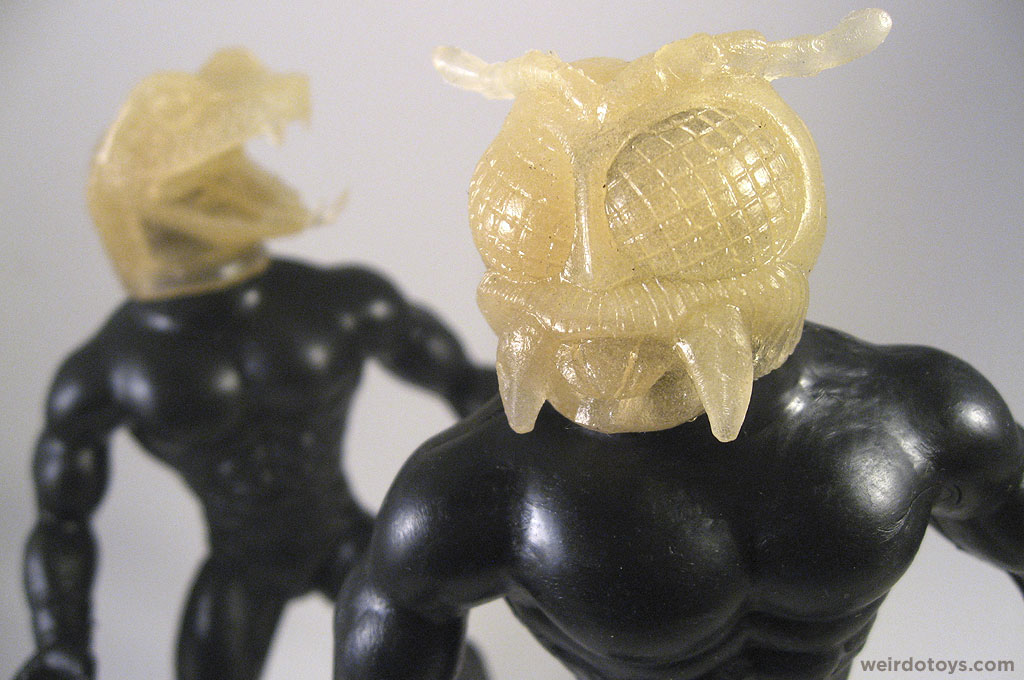 Lastly, I’d like to give some special thanks. You see, I can’t take any credit for discovering this awesome toy. I’m only featuring him. It was actually Marty “THE GODBEAST” Hansen  who introduced us toy nuts to this obscure oddity that seems to have dropped out of nowhere. Some speculate that he made these on his own, but I’ve spoken with the man, and he swears he just stumbled upon them in some odd shop. I trust him 🙂

Some of you may have already seen or heard about this figure before, because Marty actually auctioned a few of them off on various toy discussion boards last year. At the time, I drooled and cried. Not only did I miss out on them, but I was grossly outbid.

As luck would have it,  I finally got my hands on two of them. Each figure comes with three heads (I have doubles of the snake head).

Thanks Marty! You’re a pal.

Oh yeah. One last thing. There are no clues whatsoever to who or what this thing is. The only markings I can see on the figure are the words “Made in Hong Kong.” So I took upon myself to not only name this toy but to also create some faux packaging for it. I’m proud to introduce the “Super Head Muscle Fighter.” 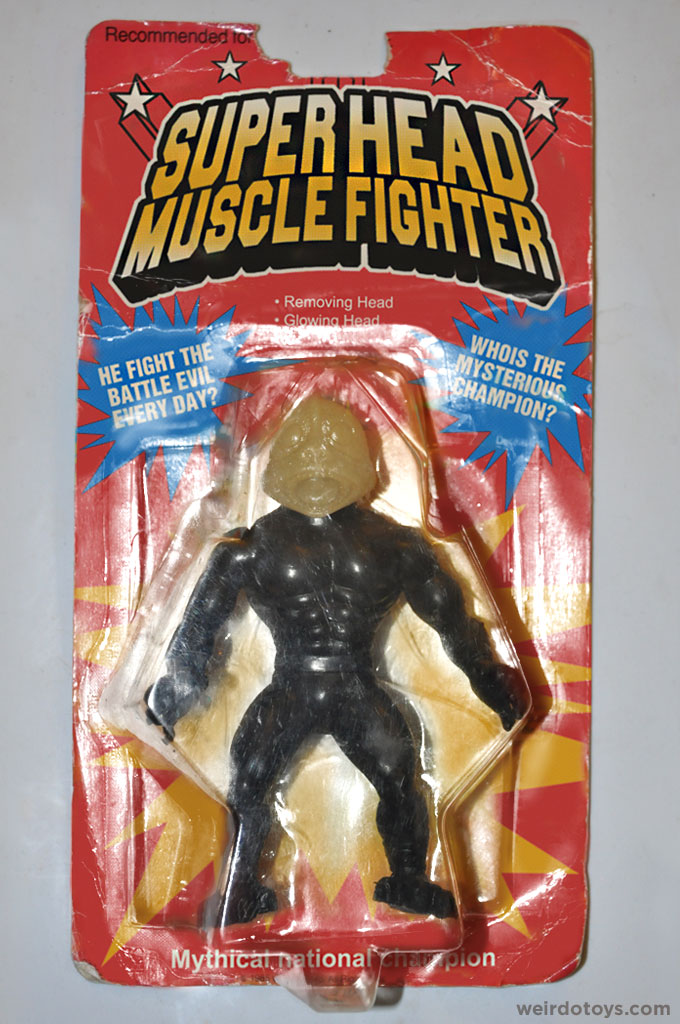 Some package verbiage highlights include:

After creating this little gem, I think I’d like to get started creating a toy line with the same name. I’d buy it 😉