I know I’ve mentioned it before, but my dad has a healthy interest in my toy hobby, and yet again, he’s uncovered a gem for us all.

Sometime last year, he surprised me with an entire case of “Creepy Freaks” by WizKids (I think it was my birthday or something. I don’t recall.) 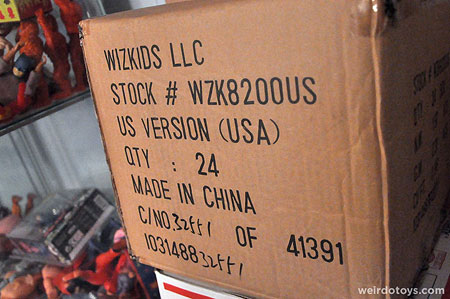 Apparently, he got the toys fairly cheap off eBay.

I’d never heard of them, but the name alone intrigued me. I had no idea what to expect once I opened the box.

So this is what I found – Twenty four blind-boxed booster packs for “the Gross Out 3D Trading Game.” (I think I kind of recognize this packaging, but I’m not quite sure. Maybe I passed by them in a Toys R Us or something.)

I opened up my first box (after painfully cutting through a thick plastic clamshell) and found two miniature figurines inside. Not bad, but actually these weren’t toys as much as they were game pieces for a kids game. 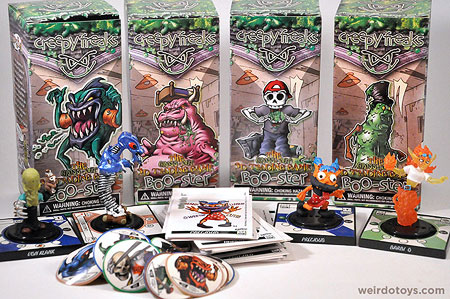 They appeared to work like HeroClix or something at first glance. I don’t have any rules for the game (and honestly don’t care to look it up. Ha!), but it looks like each character has various powers and strengths which are used when you twist the character around on his/her square base.

Along with the Creepy Freaks game pieces come circular portrait stickers and character illustration stickers with a comic strip on the back. 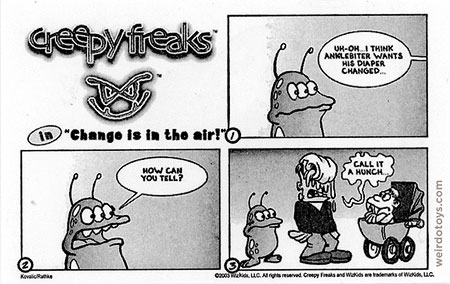 This is really starting to feel like a poorly executed modern Garbage Pail Kids.

Now, lets’ get to what’s important here: the weird character game pieces. After opening all 24 boxes, I had 48 Creepy Freaks in my possession. It seems like each character has an alternate name and paint job. Meet Sour Milk and Curdles.

Again, it kind of reminds me of Garbage Pail Kids with the the alternative naming and all. I like it.

Secondly. I didn’t want a bunch of game pieces lying around. I seriously hoped I could break the figures off their game bases.

As luck would have it, it is possible. I started breaking the game bases off every figure with brute force until my thumbs couldn’t take it anymore. A couple pairs of pliers did the trick just fine… and it didn’t involve nearly as much pain.

Okay… enough with all the BS. Let’s got to the most important part – the characters!

What I’m showing you here are some of my favorites from the collection I have. I’m not showing them all because I don’t like them all… and I honestly didn’t feel like shooting a hundred photos. Ha! 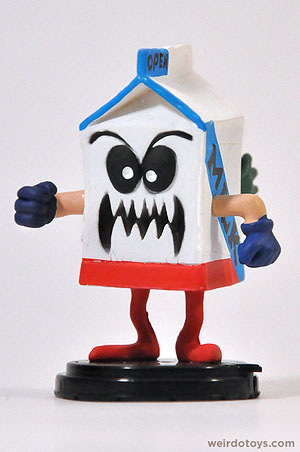 This guy is awesome. Probably my favorite of the bunch. I love the simple, maniacal milk carton w/ the little kid trapped inside trying to escape. Such a great spoof of the old missing children ads on milk cartons. Are those missing kids ads around anymore? Are milk cartons? 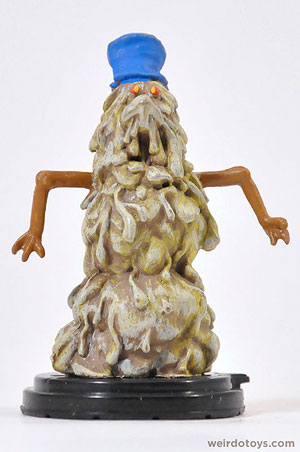 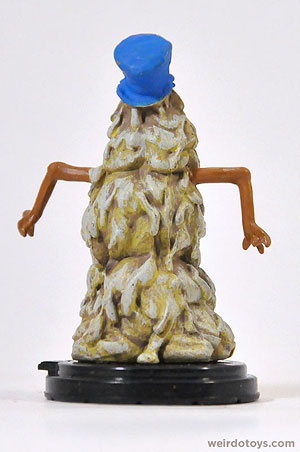 This guy’s pretty nasty. He’s obviously a spoof of Frosty the Snowman… only he’s oozing with puss. Nasty, nasty stuff. 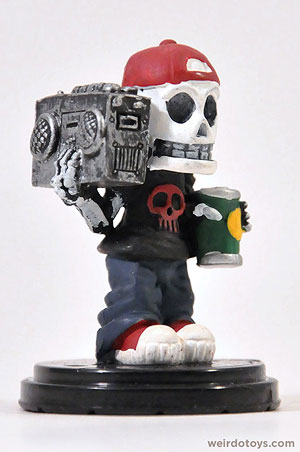 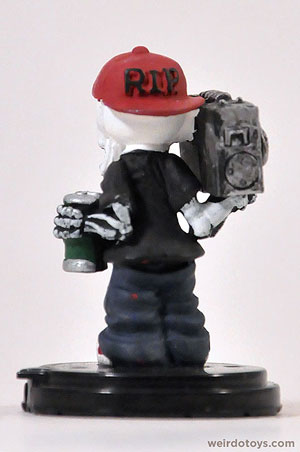 Skelehomie surprised me a little bit. Having anything with the word “homie” seems risky in this era of über-sensitivity and politically correct toys. And to top it off, the guy’s sipping on a brewski. I like it. 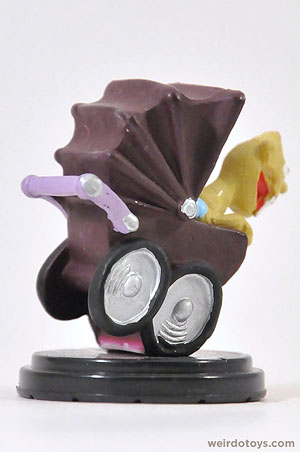 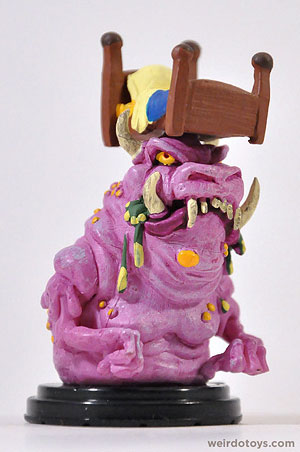 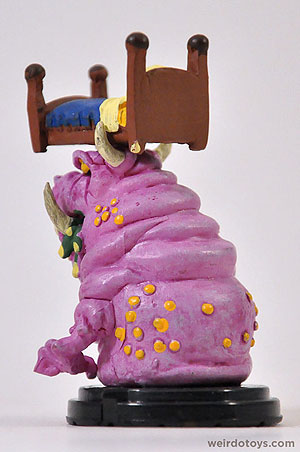 This guys is an icon. Every kid knows the monster under the bed. Well, now we’re finally getting a good look at him. Too bad there’s no little kid in the bed peeing himself. 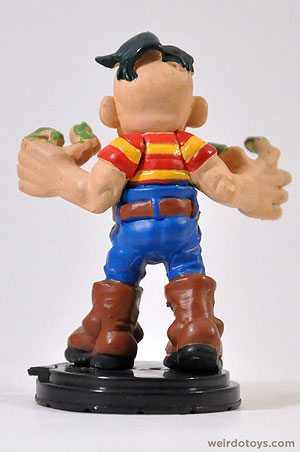 This guys kind a fun and funky. Just a cyclops ogre with a major runny nose. I don’t even mind the “Bo Oger/booger” pun. Good fun. 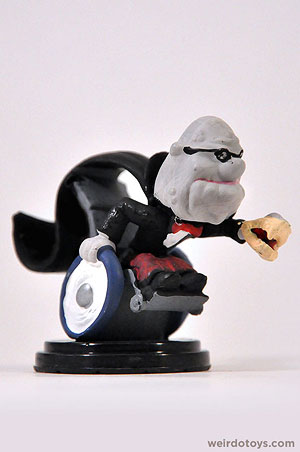 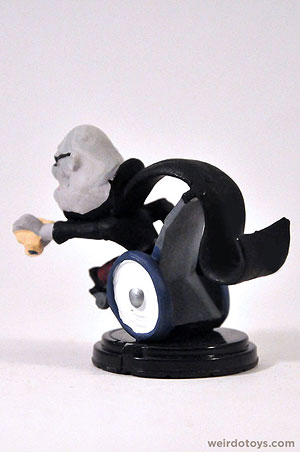 Ha! This is an awesome, awesome character design. The old’ grandpa vampire with vampire dentures. He’s rolling along in his wheel chair. It actually looks like he could be Anklebiter years from now… but vampires don’t age, right? I guess this guy was bitten at the old folks home. 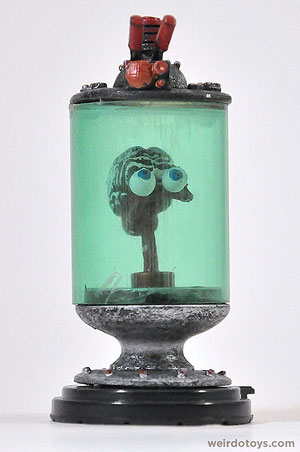 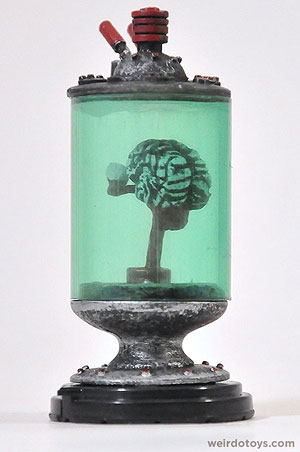 Jar head’s kinda cool. A bit unexpected. He’s reminiscent of the cliche, disembodied brain of a super-genius in a jar. Why don’t we ever see disembodied dumbass brains in jars… unless you count “Abby Normal.” 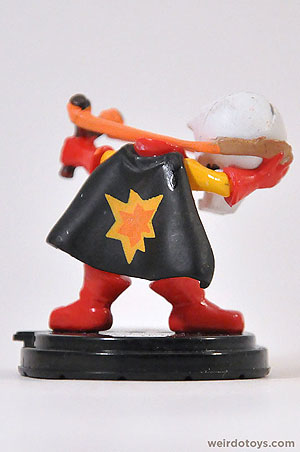 This guy is awesome enough as a skeleton super hero, but the fact that he’s using a slingshot to launch his own skull at someone… that’s pretty cool. 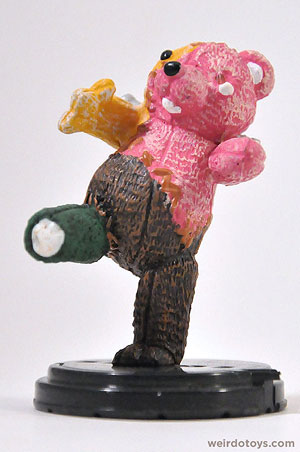 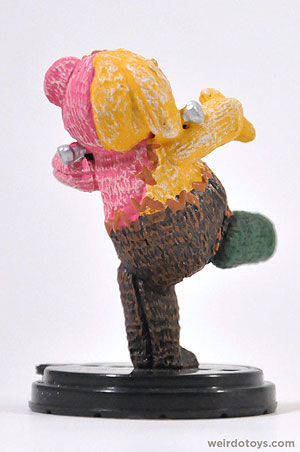 He is the ultimate franken-bear. Looks like a teddy bear brought to life by scrounging together some parts of long-deceased stuffed animals. Such a great, creepy twist on such a staple of childhood cuteness and innocence. 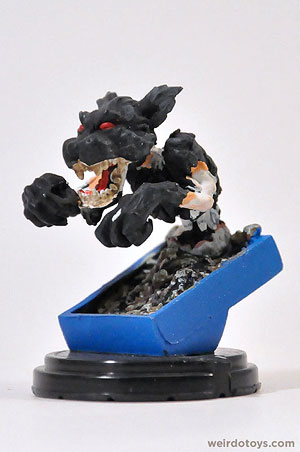 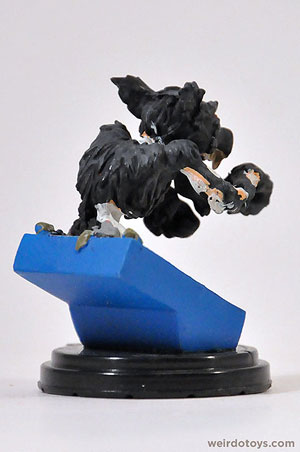 Man. I’ve never seen an undead zombie cat. He looks great. and I can’t get over the awesome gag of his rising from a litter box grave So puurfect (couldn’t resist). 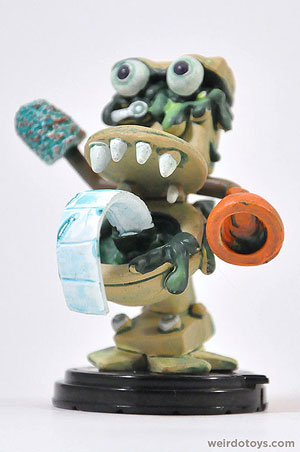 Hey, the name says it all. He’s a john. Question is, “Sit or squat… or run for your life?” I’ll let you answer that one.

Overall, I love the character designs. They are actually a lot of fun and pretty clever. I’m happy to add these cool, weird figurines to my collection.

Saddest part is the Creepy Freaks are gone. These suckers came out in 2003. I probably saw them at some point, but paid no attention to them at the time. I guess kids did the same. I think the naming, packaging, etc. may have had something to do with that.

The logo for one is pretty lame – a nondescript sans-serif type face with a devilish smiley face. It’s pretty tame and generic for a game that’s based around cool, gross creatures. Take that logo, and put it over a dark box with texture all over. and what do ya get? An indiscernible mess. 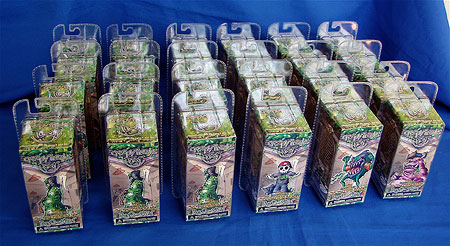 No way you could read that package on the shelves. plus, there’ so much texture and shadows and glows and stuff, you can’t ever tell what you’re looking at.

I think the figurines are great, but the awkward, comic-book style illustrations and unfunny comic strips seems to just throw too much in the mix. Maybe it wasn’t “too much,” but when it’s not all presented well, it just comes across as an incohesive mess.

Am i being too critical? Ha!

One last thing. I wonder if the cartoony, gross character trend is reserved for a generation of 80s kids. Do kids nowadays like this stuff? If so, I have hope 😀