On the Weirdo Toys blog, it’s always been my mission to uncover rare and strange oddities, but this time I’m onto something really special.

I’ve just uncovered this undiscovered etching of a long-forgotten ancestor in our evolutionary heritage. 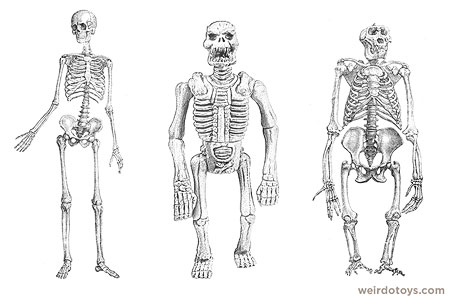 It looks like this new “creature” is a mutated step between gorillas and humans.

So, who gives a crap about rare creature etchings, right? We’re here for the toys! Well, as soon as I saw this drawing, I actually recognized the creature in the center there. 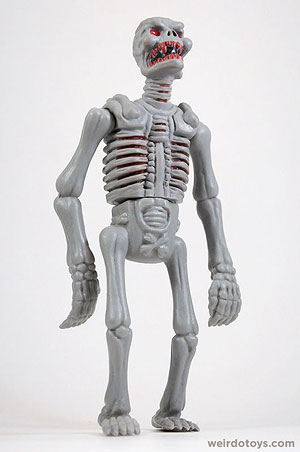 I actually have a toy of that exact skeleton. I dug it up last year in a toy excavation. Pretty coincidental.

But I have a feeling that the specimen I found is a rare, undead, zombie skeleton. 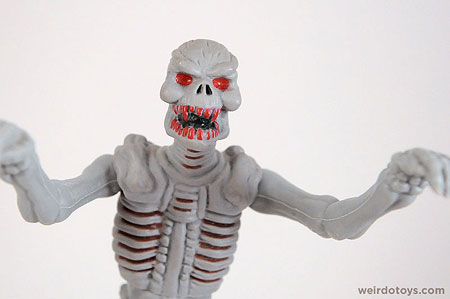 He looks a bit zombie-ish to me.

He’s got some tell-tale signs – like his glowing read eyes and his mouth full of bloody teeth.

If you take a closer look at his body, you’ll see some other strange anomalies like his big ol’ hands and tiny feet.

Check out his torso. What’s with that funky sternum and neck ventilation? And I’m guessing the pelvic vent and crotch cross-bones didn’t help in his survival. 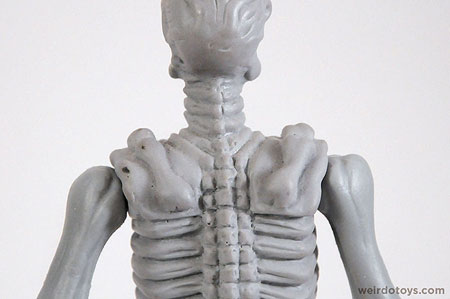 And this is weird too. There are arbitrary bones growing on his shoulders and hips. What the hell?

I wish I knew what to call this guy. Maybe I should call him “Mortisapien.” (Lame. I know.)

Okay. Okay. enough of the B.S. here’s the real scoop on this toy. 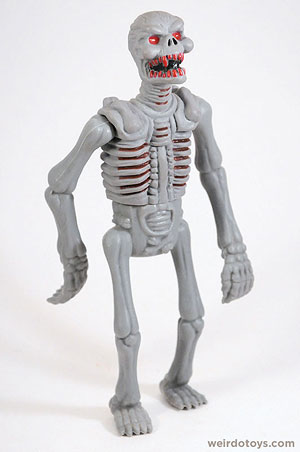 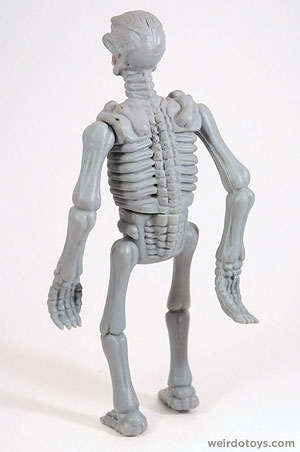 I was actually lucky enough to receive this skeleton toy as a gift from The Godbeast when I bought a couple of Underworld Warriors figures from him last year. Thing is, I have no clue what the hell he is or where he comes from (and neither did The Godbeast). He’s an unmarked gray skeleton. I don’t think he’s a crappy bootleg, because he’s fairly well made. I base this primarily on his paint application. Look how well done the red strips between the ribs and vertebrae are. Even each individual tooth is painted. That would take some seriously skilled sweatshop laborers to paint like that.

So, if you happen to know anything about this toy, please share with the rest of us.