Seriously though. Look at these guys. It’s a freakin’ oatmeal monster and the Quaker Oats guy as a He-Man figure. 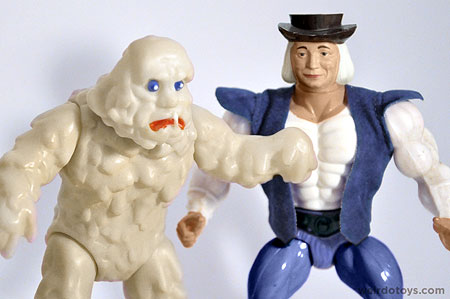 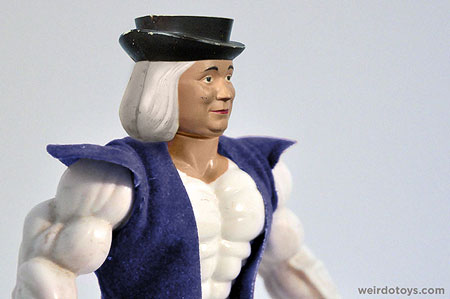 I’m not a huge collector of the Masters of the Universe (MOTU) toyline, but I had the toys as a child. I am pretty familiar with the original MOTU toyline and all of its characters, variations, etc., but I have never seen or heard of this guy. Ever. There are tons of other blogs and toy sites that are dedicated strictly to the MOTU toyline, and according to them this figure doesn’t exist. It actually reminds me of the infamous “Wonderbread He-Man.” 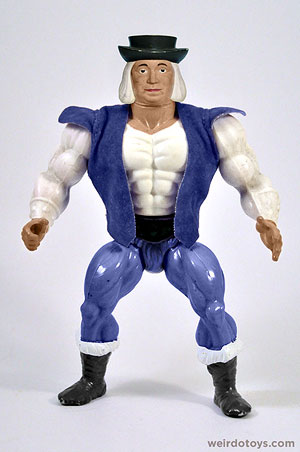 Alright. I’d like to buy that this figure doesn’t exist and that this is just someone’s really lame idea for a MOTU custom… thing is, I can’t. The paint job is just too good, the head too well-sculpted and then there’s this – along with the figure came this little sheet of paper. 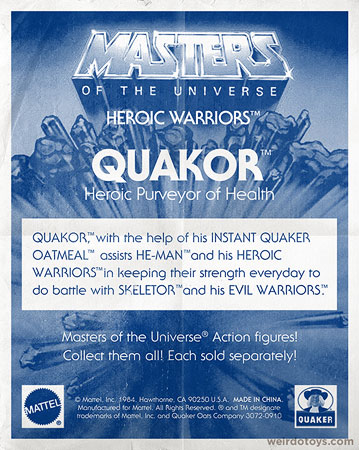 It’s a small bio thing explaining that this is Quakor and he helps He-man and the gang stay healthy. It reads:

Quakor: Heroic Purveyor of Health
Quakor with the help of his Instant Quaker Oatmeal assists He-Man and his Heroic Warriors in keeping their strength everyday to do battle with Skeletor and his Evil Warriors.

And man, that’s some lame, blatant marketing going on there. Heroic Purveyor of Health? Ha!

I also found this little order form. I’m guessing it was packed in the Instant Quaker Oatmeal boxes. 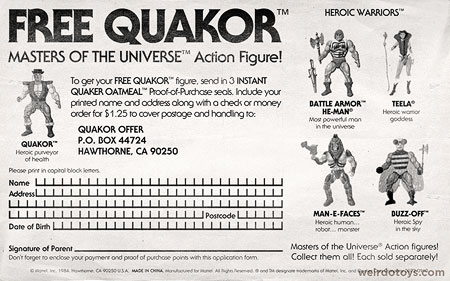 Apparently Quakor is a mail-away figure from the Quaker Oats company which was produced in partnership with Mattel. I’m all about exclusive or mail-away toys, but the fact that this thing even exists seems absurd. Sure, it’s just a simple repaint of the Prince Adam toy with a new head, but a super-buff Quaker character seems soooo poorly planned. Just a bad, bad idea.

But it doesn’t stop there.

As I showed you earlier, there’s this guy – the Oatmeal Monster. It’s actually another toy offer Quaker did for a character called Mush Man. 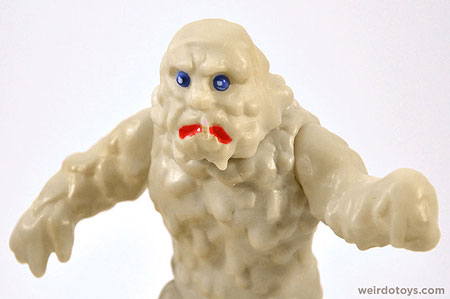 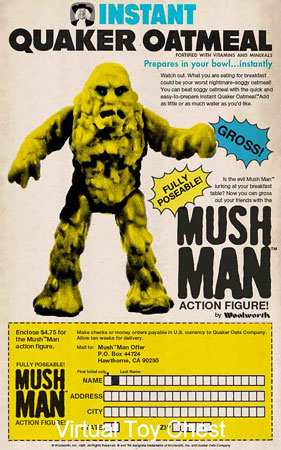 Thing is, why the hell would you promote your own oatmeal product as a monster? Ha!

I do admit, it makes for a cool looking toy which cashes in on the 80s “gross” phase.  It just seems a bit out-of character, that’s all. 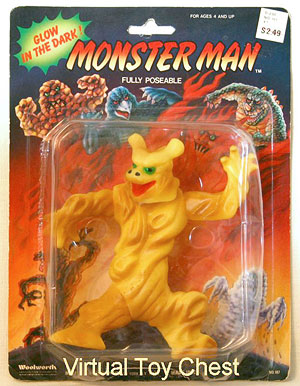 As soon as I laid eyes on Mush Man, I knew I recognized him. He seems to just be a simple re-deco of a figure called Muck Man from an obscure 80s toyline called “Monster Man” by Woolworth. 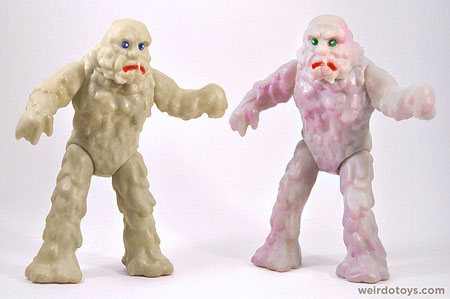 The original Muck Man has a gray/purple color scheme while Mush man is just beige. 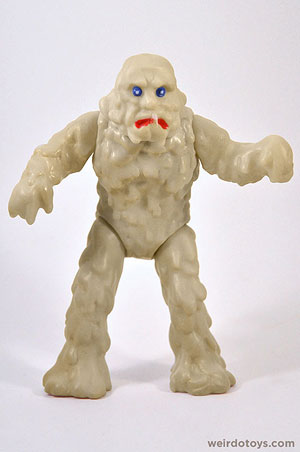 I’m not sure if this guy was released before or after Quakor, but they kind of make a fun set. The Quaker man vs. the walking pile of oatmeal. Who’d a thunk it?

So there ya go. Did I over-dramatize the obscurity of these things? I guess I just got excited.

If any of you Masters of the Universe collectors out there can help me validate Quakor, that’d be great. Thanks!