I was reluctantly in a McDonald’s restaurant the other morning ordering an Egg McMuffin for breakfast. (Don’t ask me why. It involves traveling to “in-the-middle-of-nowhere”, Georgia and being stuck with one or two options for food.) While waiting for my order, I casually strolled around the place when I noticed the familiar, plastic bubble filled with crappy Happy Meal toys based on some Hollywood blockbuster movie. The movie toys this time around were based on characters from “Night at the Museum: Battle of the Smithonsian.”

That’s when I saw this guy. 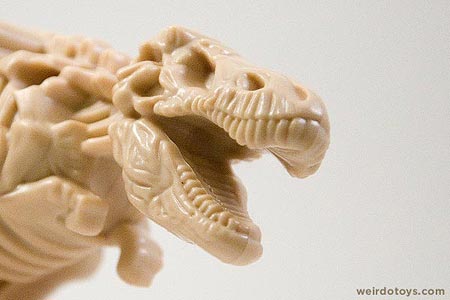 A dinosaur skeleton? I had to have him, but I sure as hell didn’t want to order a Happy Meal. I asked the cashier if there were any dinosaur skeleton toys left and if I could just buy it outright. She rummaged through a large pin of shrink-wrapped plastic, and it turns out, there were only two characters left – the T-Rex and some Octopus thing. What luck! Better yet, she said the toy would only cost me $1.07. Wow! Not bad. 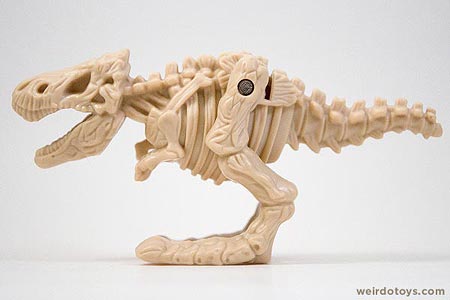 If you’re familiar at all with the Museum movies, you’ll know that in the movie, after the museum closes, all of its exhibits come to life. Well, one of the exhibits is giant skeleton T-Rex that runs around like a super-hyper puppy fetching a bone for the museum’s security guard. So, this is a walking wind-up toy of Rexy, and I must say he looks pretty cool for a McDonald’s toy. 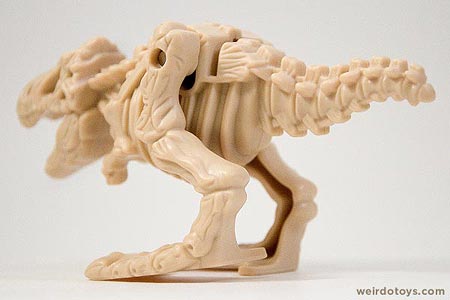 I’m actually surprised that I’m featuring a McDonald’s toy on the blog, but there are a few good reasons I’m writing about him. 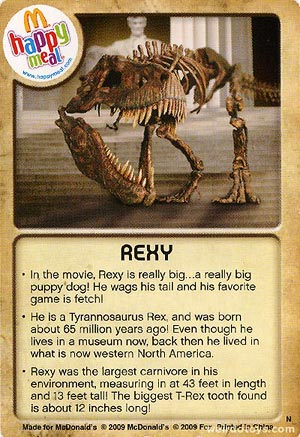 Oh yeah, one last thing – the Rexy toy comes with a trading card. It contains bio info and trivia about the character. It’s nothing special to look at.

But the really, really, really, really lame thing is, in order for Rexy’s walking action to activate, you have to slip the card into his back to press a small trigger. What the hell kind of crap is that? Why not just let the toy walk on its own? If there needs to be a trigger, why not just let it be an on/off switch. If there needs to be some gimmick that wakes the dinosaur and allows it to move, why couldn’t it just be some cool extra piece like a bone or a little man to ride it or something? A playing card? Gimme a break.

Well, what do you expect for a dollar?