I don’t even know where to begin with what I’m going to show you today.

You know what? I take that back. Described in a single word – “fun.”

Wait. I have more words…

As soon as I saw these toys, all I felt was joy, giddy-ness, surprise, anticipation. I literally laughed. You know if toys make you excited with laughter, they have to be worth something.

The beastly toys we have here are… 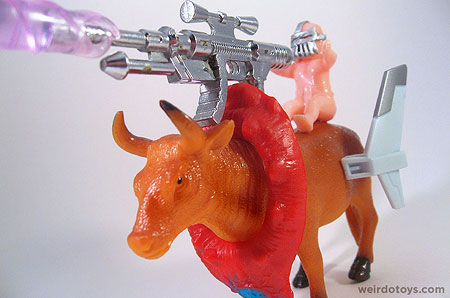 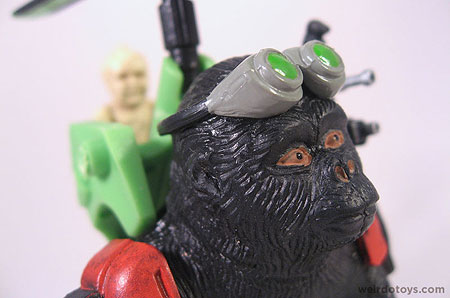 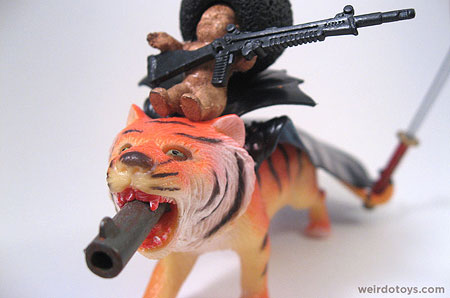 They are a bunch of well-armed animals piloted/ridden by BABIES! I have no clue how I’ve never seen these things before now, but I know I love ’em.

They are probably just some weird, obscure vintage toyline that was produced as a knockoff of the Barnyard Commandos. (How have I missed these before now?)

First up, is Cybear Vishnu.
This guy means business. 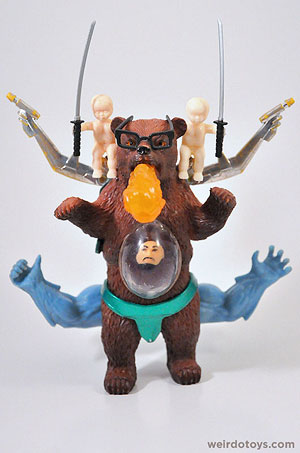 Look at ‘im. He’s a freaky 8-legged monstrosity.  At his core, he’s a bear, but it looks like he’s been merged with some weird humanoid with big blue arms coming out of his butt cheeks along with some robotic prosthetics on his shoulders. There’s a head in bowl in his belly. Is he the conjoined twin brother? This is freaky. 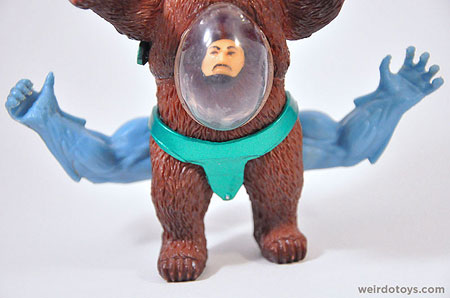 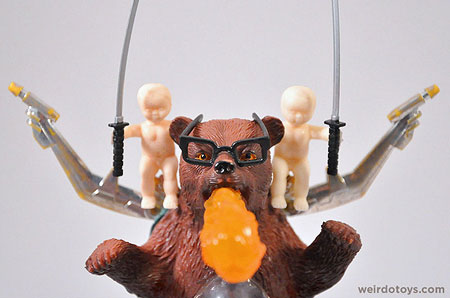 Next we have Bullshot.
He’s just a bull with a big honkin’ gun on his back. 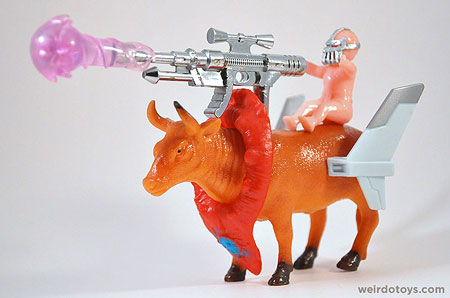 He seems to be fitted with a fluffy collar and tailfins. (maybe this guy can get airborne.) 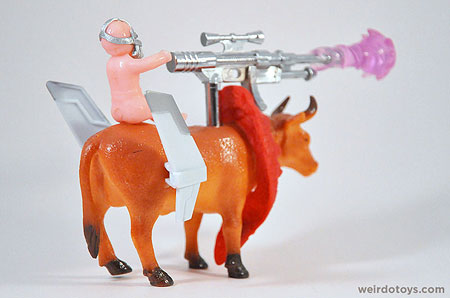 And he’s piloted by The Unhumongous – the most evil-looking baby I’ve ever seen. 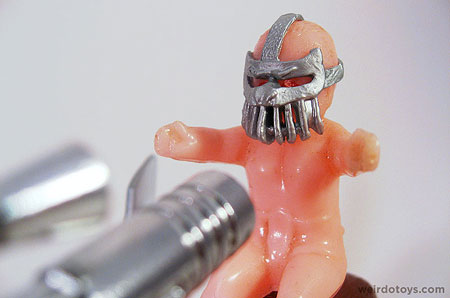 The scary metal face mask most definitely is hiding a freakishly-scarred visage he’s had all his life… all 9 months of it. Ha. 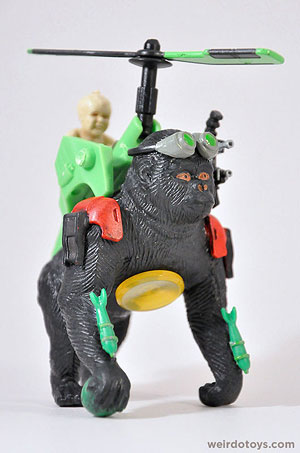 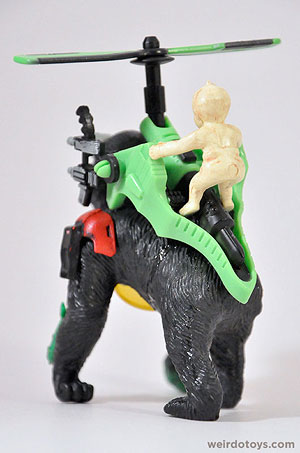 Next up? Coptorilla. Wow. A Gorilla helicopter!

This ape is equipped with goggles, shoulder pads, missiles and a functioning propeller. He’s ready for action… and it looks like he may want to play catch later too. (Check out his right hand.) 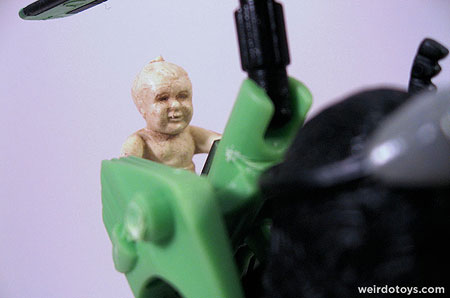 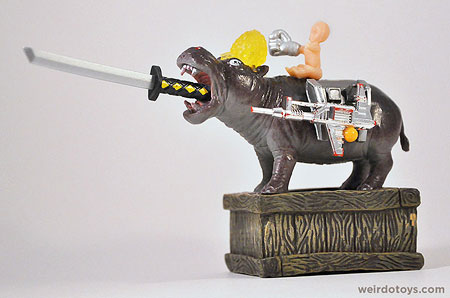 Here we have Shankoppotamus – a killer hippo (well, more killer than usual I guess).

So hippos are inherently mean and dangerous to begin with, but this guy regurgitates a sword. Sheez! And for long range attacks, he’s equipped with a big laser cannon. I never imagined hippos being so high-tech. 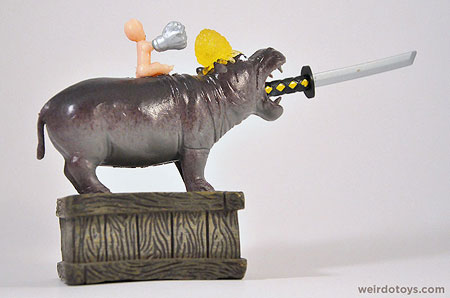 See that yellow blob on his head? I think that’s brain slug which is probably how the baby here keeps him under his control. and speaking of the baby… 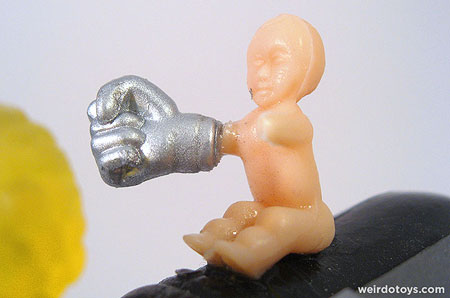 Damn! Look at that fist. He’d clobber the crap out of you. Guess that’s why he’s called The Clobbler. (Looks like Fisto’s love child.) 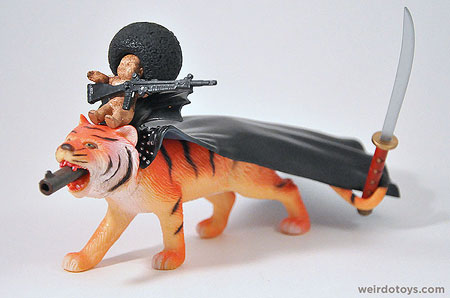 Last but not least is Count Tiger Gun. This guy means business. Not only is he wielding a blade, but he has a gun barrel jutting out of his mouth… and he’s a vampire apparently. 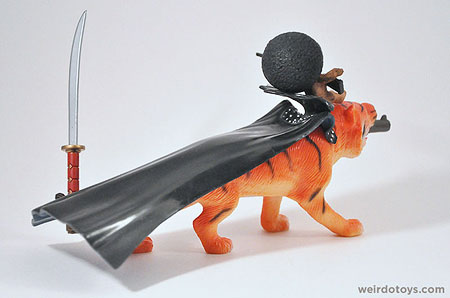 Wow. Imagine being chased by a tiger. Scary, right? Well what if that tiger was undead and shooting/slicing at you as he chased you? Ha! 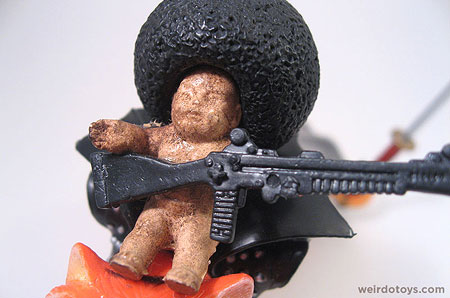 His baby, Afro Toddler, is interesting. He looks like an Asian baby with a big-ass afro. I’m sure he’s hiding grenades in there or something.  He’s also toting around a big machine gun.

Man these babies really are ready for battle.

Unfortunately, I have a confession: These toys aren’t an actual toyline. They are customs made by a fellow weirdo toy lover.

This new legendary toyline all started with my newfound toy buddy, Brad Rader (who coincidentally is the husband of fellow geek blogger, Stacey “GeekyVixen” Rader).

Anyway, one day, Brad sent me a link to a collection of photos (below) spotlighting his “Battle Babies”

The thing that gets me is how perfectly suited each accessory is to the baby and to the beast.

So freakin’ great and well done.

You can buy Battle Babies at the GeekyVixen Etsy shop! If you end up with any in your collection, please share your impressions, pics, etc!