I recently realized I don’t have any weird Christmas-themed toys lying around, so yesterday, I decided to go on a search for something odd to feature on the blog. I really had no idea where to start. Luckily, a friend of mine recommended a place filled with all kinds of random crap – Wilsons 5¢ and $1.00 (typically known as Wilson’s 5¢ and 10¢). Once there, I dug around a bit, rummaging through some stuff you might expect – snowman rubber duckies, reindeer with light-up noses, santa bobble-heads, etc. I was a bit disappointed. There was some “cute” stuff but not a damned thing that I’d consider a “weirdo toy.”

On my way out, I walked by a stack of boxes that presented a disturbing sight. At a glance, I didn’t know what I’d seen. I just knew I’d seen Santa’s nipples, and it seemed very, very wrong (That’s a good first step to being a weirdo toy). On closer inspection, i saw Santa and Mrs. Claus bathing together. This may be the first time we’ve seen this couple so scantily clad. Not your typical holiday scenario. This seemed a bit wrong too (Hmm. A good second step to being a weirdo toy). I picked up the toy and found its power switch. Once activated I realized this wasn’t just a weird half-naked depiction of Mr. and Mrs. Claus bathing together, but it was a sound-activated, singing and dancing, half-naked Mr. and Mrs. Claus (Okay, that’s it! This is now a weirdo toy). Well, only Santa actually sings. And of course, he’s singing “Santa Claus is Coming to Town.”

Santa Claus is Coming to Town
(Click to enlarge) 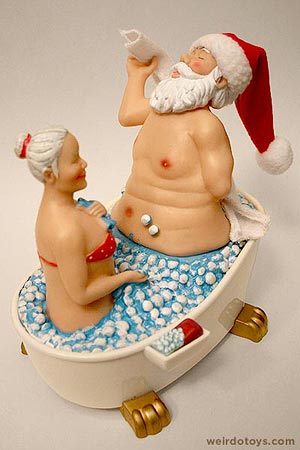 Here’s a look at Mr. and Mrs. Claus in action.

With every gyrating pulse, Santa leans back and forth toward the vibrating Mrs. Claus, accentuating the freaky, rubbery folds of skin that move and flex over the animatronics. It’s slightly disturbing and maybe even a bit perverse, but I think it’s hilarious. 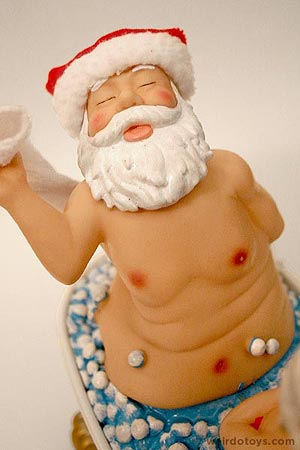 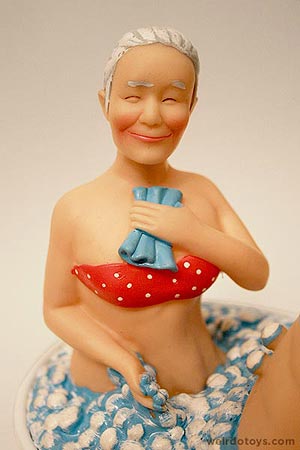 I’m curious to know why Santa’s belly button is so red and inflamed. It really looks infected. Disgusting. And those bubbles look like weird growths.

“Mr. & Mrs. Santa Sing and Swing in the Bathtub”
(Click to enlarge)

Well, we now know that even Santa is naughty sometimes. I just hope this disturbing sight of St. Nick hasn’t ruined Christmas for you. Merry Christmas Everybody!