Great news!! (for me anyway)

I’ve managed to get my hands on some carded Gross Out Gang (GOG) figures! 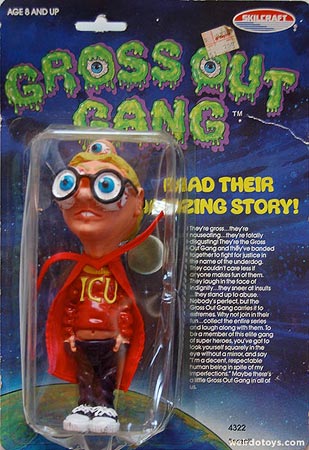 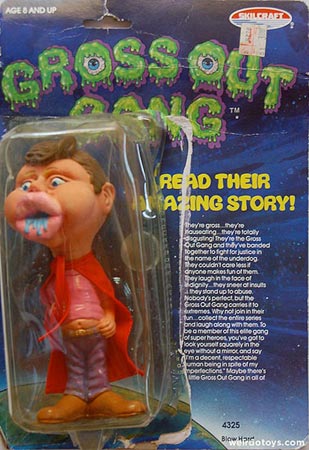 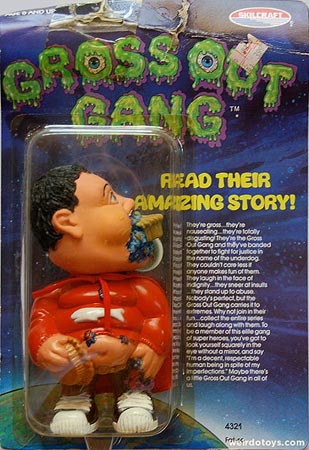 You remember the GOG don’t you? (I’ve only written about them a hundred times.) I wrote about them when I discovered their toyline, their vintage toy ad and when I actually found the whole gang. Hell, I even started this blog with one of the figures.

So, I guess the gang holds a little piece of my heart.

Anyway, there are 3 main reasons why it is good to get these packaged figures:

1. Closure. I’ve finally learned the names of the three previously unidentified GOG members. If you recall from one of my previous entries, I was missing the names of the “Lips Kid,” “Nose Kid” and “Pie Kid.” Well I’d like to officially introduce you to Blow Hard, Nose Ark and Fat-so.

Pretty bad eh? Punny and non-PC. Awesome. No way they’d make a toy of a fat kid nowadays and call him “Fat-so”. I sure do miss the 80s.

2. Surprises. I finally have access to the cards from the figures’ packaging. I didn’t know what to expect. As a service to you, the reader, and anyone else in the history of the world who has lost nights of sleep contemplating what was on the back of the Gross Out Gang card, I will share with you. 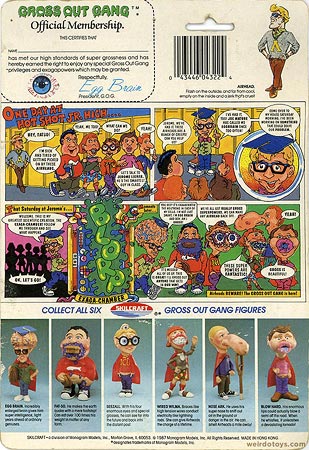 First we get a goofy Gross Out Gang Membership Card, and it’s been signed by Egg Brain himself. The President of the GOG! 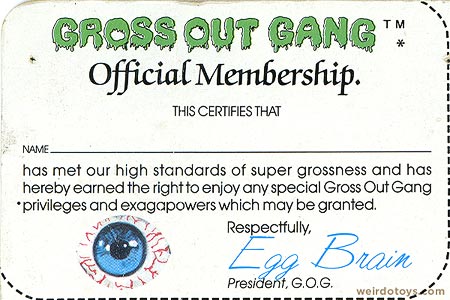 Second, we’re introduced to the bully character, Airhead. Too bad they didn’t make a figure of him to be the villain in the toyline. 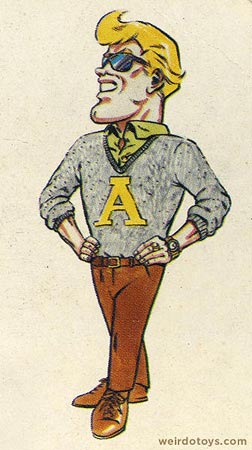 Third, we get a horrible, but still charming origin story. Looks like the GOG were a bunch of social rejects that were constantly picked on by “Airheads” (or jocks). Luckily, Egg Brain had a device that accentuated the very traits that made them rejects in the first place, giving them “Exagapowers,” so now they are gross freaks and proud of it. 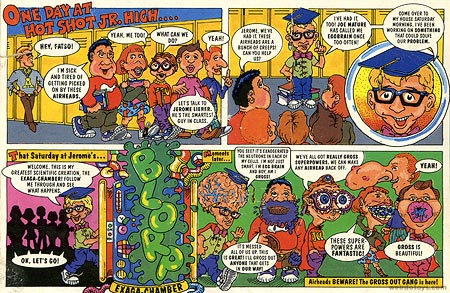 Fourth, we get a GOG lineup with short bios for each character briefly explaining their gross “powers.”.

3. Obsession. I get my hands on “virgin” Gross Out Gang toys. Untouched by anyone for over 20 years. Freshly unsealed GOG figures smell nice, fresh and plasticy. Since I can’t really demonstrate their fresh scent, I’ll just give you a rundown of this poorly planned toy package artwork. 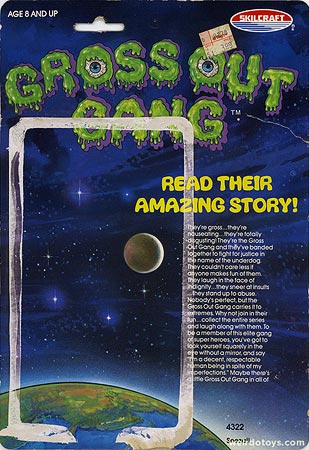 As you can see, the only way to get an unhindered view of the Gross Out Gang background and story is to open the package. Which is great, because I wanted to do that anyway.

What the hell. The front of this package may be one of the most poorly-planned toy package designs ever. First, the logo/name of the toyline is blocked by the figures, but to top it off, there’s a huge freakin’ paragraph telling the story of the GOG… on the front of the card. How challenging are they trying to make this for the costumer? As you’re perusing the toy aisle, they hope you read the 124-word paragraph that is actually overlapped by the figure and the card bubble? It seems like the package was designed by some guy at Skilcraft before he knew the size of the toys. Oh well. 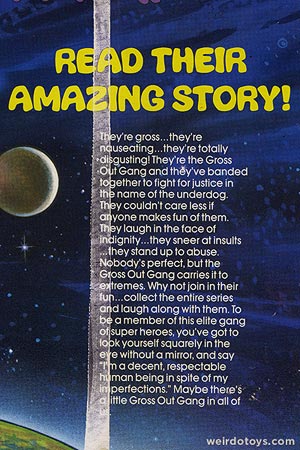 They’re gross… they’re nauseating… they’re totally disgusting! They’re the Gross Out Gang and they’ve banded together to fight for justice in the name of the underdog. They couldn’t care less if anyone makes fun of them. They laugh in the face of indignity… they sneer at insults… they stand up to abuse. Nobody’s perfect, but the Gross Out Gang carries it to extremes. Why not join in their fun… collect the entire series and laugh along with them. To be a member of this elite gang of super heroes, you’ve got to look yourself squarely in the eye without a mirror, and say “Im a decent, respectable human being in spite of my imperfections.” Maybe there’s a little Gross Out Gang in all of us.

That’s pretty touching actually. The toys are goofy and gross, but I like the message to kids that you can be proud of your differences. I’m thinking a modern toyline wouldn’t even approach the subject of human frailty, insecurity, and the sometimes awkward individuality. Stand up for yourself and disregard any kind of insults you may get from other punk kids. We were all underdogs growing up. I know you all were. You’re reading a toy blog for Christ’s sake. 😀 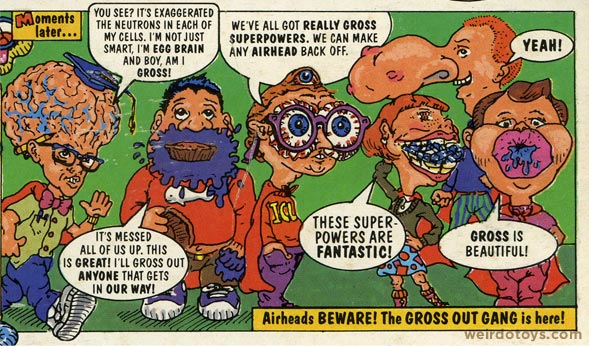 I only got four “fresh” GOG figures, and their cards are all beat up. I don’t mind. But I’m still on the lookout for the Nose Ark figure with his nose crutch. I want that crutch 🙂

So, now I have some GOG duplicates. Maybe I’ll sell them or use them for future toy trades or something. Anyone out there interested?