Hello again. Sorry I haven’t had a new toy up in a while. I was away on vacation, and now I’ve finally gotten around to bringing you more weirdo toy goodness.

Speaking of weird, here’s a little something i recently ordered from Japan. It actually arrived a couple of weeks back, but I’m just now getting around to posting it. Sure, this guy doesn’t look too much out of the ordinary, but wait until you discover his little “secret.” 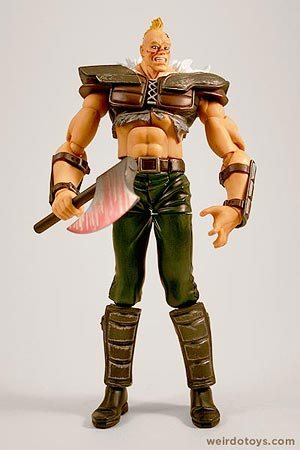 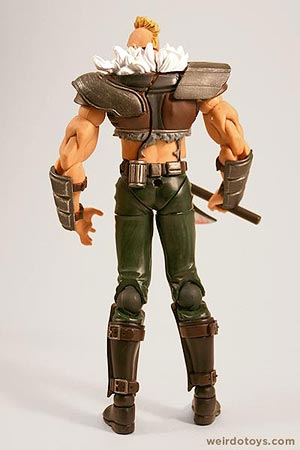 So, what we have here is the second in a new series of Hokuto no Ken – Revolution figures. In America, Hokuto no Ken is better known as Fist of the NorthStar. This character is a apparently a member of the gang called Zeed (some bad guys from the series).

I am vaguely familiar with the Fist of the NorthStar series, but I’ve never been a fan of it. In fact, the only first-hand knowledge I ever had of the series was gathered in the old days of my playing Game Boy as a kid.

I had the mediocre Fist of the NorthStar fighting game. It was a pretty dull experience, but I really loved drawing the characters from the game booklet.

Well, if I knew then what I know now, I would’ve been even more disappointed in the game. From what I’ve recently gathered, Fist of the NorthStar is a Manga and Anime series that takes place in a post-apocalyptic world overrun by a bunch of bullies trying to take advantage of the weak and innocent. That’s where the main hero, Kenshiro, comes in. He’s your iconic, mysterious wanderer who comes into town, seeks out the trouble, and like most kung-fu movie heroes, he kicks ass. 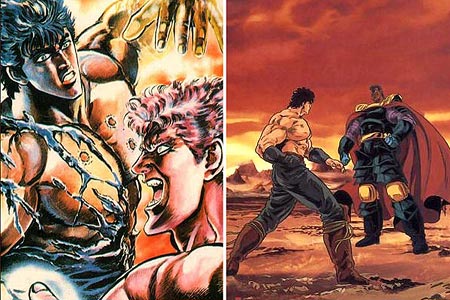 Well, maybe it’s not “ass kicking” as much as it is “face punching.” 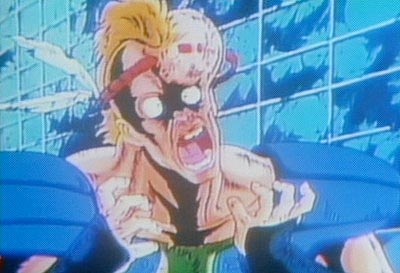 You see, Kenshiro has a gift. He can pummel the crap out of these bad guys which initially shows no effects… but a few seconds later, the bad guys’ bodies realize they have just been clobbered… which usually results in a spontaneous and gratuitous explosion of gore.

Check out this clip. It should make things a lot clearer for you.

That is where this toy’s secret comes in. Not only is he a decently poseable, post-apocalyptic gang member of Zeed… 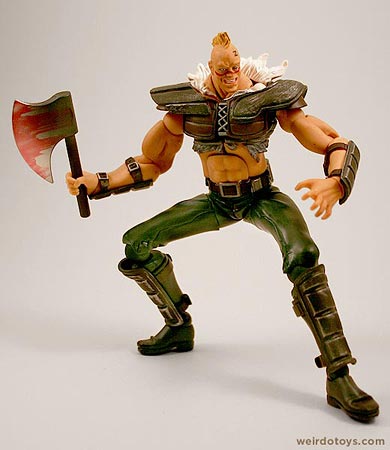 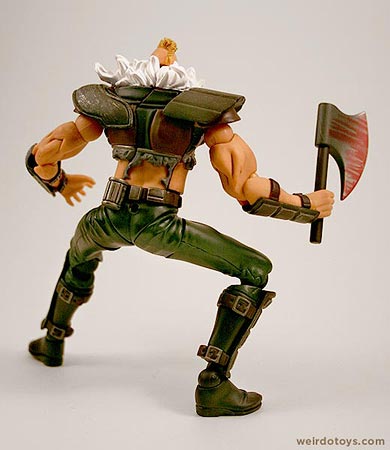 … but he’s also a recent victim of Kenshiro… 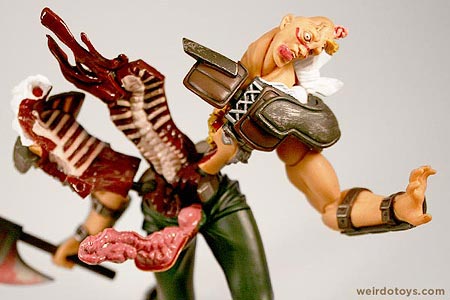 … which means he has an awesome-exploding-transformation action feature. Now kids can reenact the brutal demise of this Fist of the NorthStar baddy. Good times! 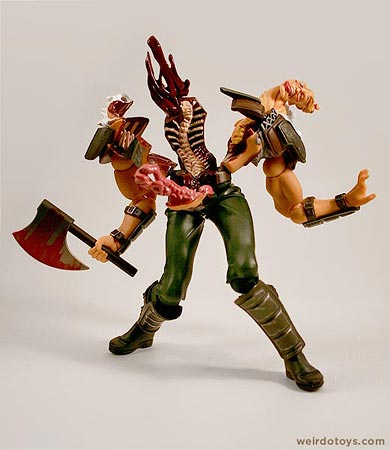 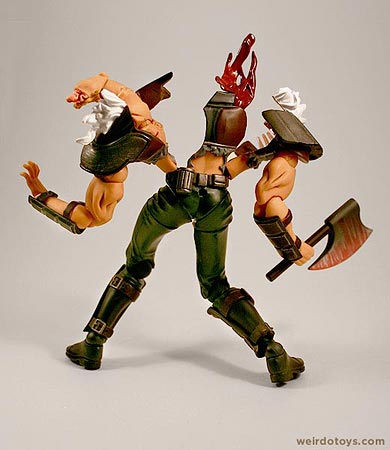 Rewatch that video clip, and pay attention at the 2:08 mark. I looks like a Zeed member explosion in action.

Look at the details on this guy – 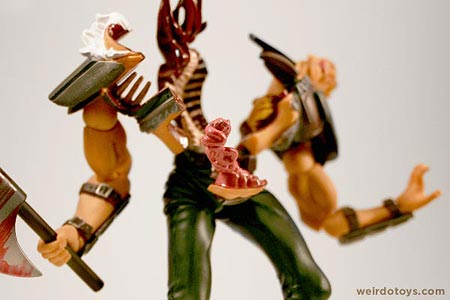 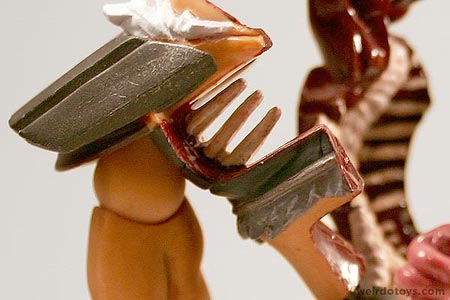 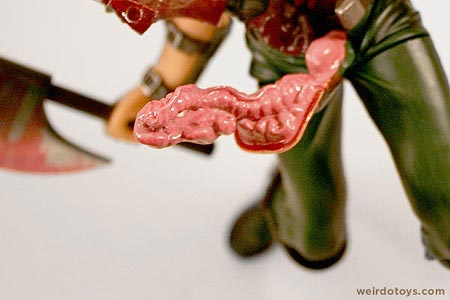 It doesn’t get any better than that.

Lemme share just a few more things. Like I mentioned before, this toy is a Japanese import, but I think it’s coming to the U.S. soon. If I’m not mistaken, it will be available Dec. 30, 2008 (I couldn’t wait that long. Plus, I wanted to show you guys). 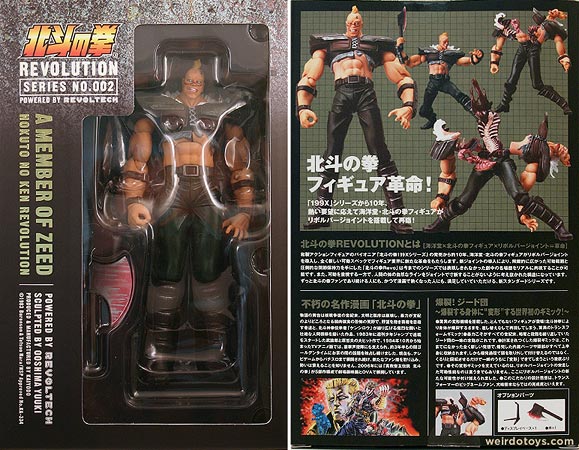 Once I received the toy, I was pretty excited. the figure is smaller and more light weight than I expected. I think it’s about 8″ tall with several swivel and ball joints. The figure  has a bunch of hinges too which are made to be loose. They come apart easily, but I think it’s just a safety precaution, so we don’t end up breaking the toy while transforming it. The figure also comes with a support stand (which i didn’t wanna use) and a bloody axe accessory. 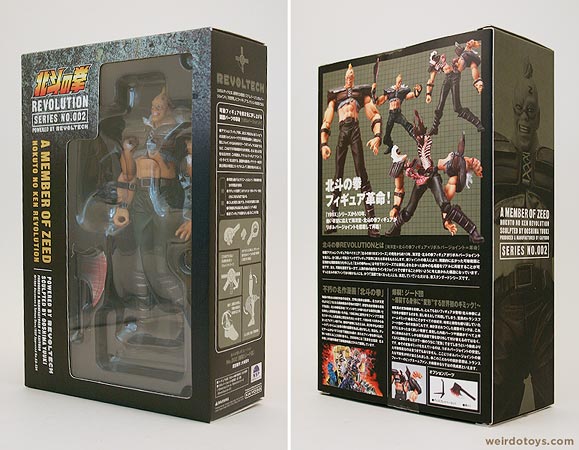 One of the coolest things about the import is the box. It’s covered in a bunch of “gibberish” I don’t understand, but it looks cool. Plus, the box is re-closeable, which is great. Hopefully, the American release will do something similar for those that are “hard-core collectors” or whatever (I wasn’t really that worried about it).

So there you have it. The world’s first exploding action figure. It’s kind of like combining the fun of Transformers with the gore of McFarlane Toys figures. There should be a whole toyline of figures like this.