So all those who lost the Madballs they had as kids (and even those who kept their Madballs just to realize they’d disintegrate over time), fret no further. They’re back!

You remember Madballs. They actually had success in the mid 80s, combining the gross-out character style of Garbage Pail Kids and the playability of a ball. Well, it’s 20 years later and some of your old favorites are back and have been redesigned to be even more disgusting. 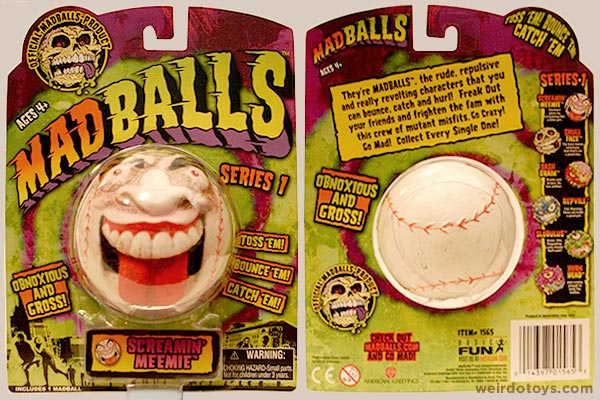 The modern Madballs are brought to us by Basic Fun and American Greetings (freaky huh?). Each series has 5 classic characters from the original 80s line with the addition of a new modern character. The characters available in this first series are the ever-popular Screamin’ Meemie, Skull Face, Bash Brain (known as Crack Head back in the day), Repvile, Slobulus and Horn Head.

Skull Face – The bare bones minimum. And that’s on a good day.
(Click to enlarge)

Bash Brain – Brains and brawn: He has neither.
(Click to enlarge)

Repvile – Fair Warning: Does not make a good pet.
(Click to enlarge)

These toys are foam rubber balls like the originals, but there’s another new Madballs series called Madballs Sick. They are slightly larger rubber balls that reveal gross gags when you squeeze ’em. Bulging eyes, pulsing brains, oozing blood and all that kind of stuff. Here’s a shot I found online (I don’t like them that much, that’s why I’m only presenting the classic foam rubber ones).

What I’ve enjoyed even more than the new Madballs is the Madballs Central blog started by Madball artist, James Groman. Here’s a taste of some of the awesome sketches and paintings he’s posting on the site (I wish the toys turned out as well as his original artwork). 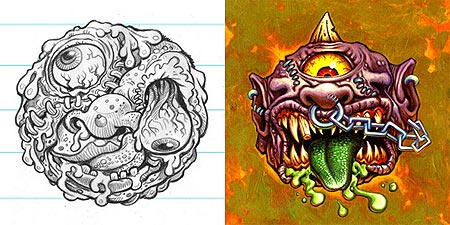