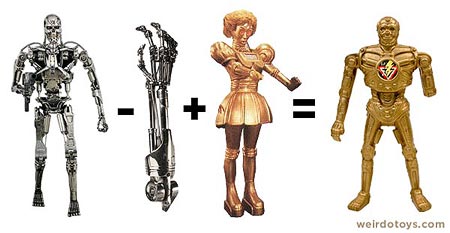 Well, look at what we have here – if it ain’t another bootleg toy. This guy looks like the bastard offspring of the Terminator’s T-800 and Spaceballs’ Dot Matrix (I could’ve said C-3PO, but that’s a bit too creepy). I didn’t even know robots could have sex. 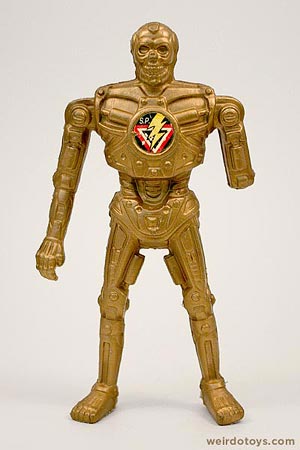 The figure looks pretty goofy (Well, he’s not an “action figure” as much as he is a “statue.” He isn’t poseable at all.)… maybe something you’d find in the grocery store’s toy section . He was probably hanging alongside those mini police badge sets and other crummy Japanese imports (I’ve never understood why grocery stores have such shitty toy selection. Maybe I can do a future blog post about that). 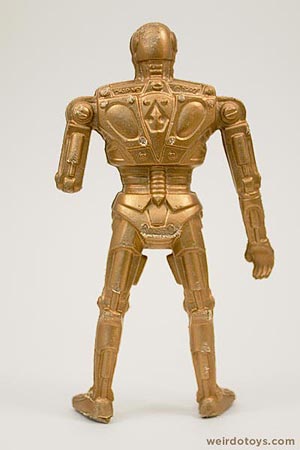 I’m just assuming he’s a ripoff of the iconic Terminator toys. I know, I know, just because he’s a robotic endoskeleton doesn’t mean he’s trying to cash in on the success of the films. But Terminator 2: Judgement Day was released in 1991, and this toy was made in 1992 (well according to its markings anyway –”Chap Mei ©1992.”). Looks like they were a bit late with the bootlegging.

But beyond the fact that he’s a robotic endoskeleton (with a goofy grin), look at his arm. No. the other one. The missing one.

He’s lost an arm!  Just like the terminators did in the first couple of movies.

Actually, when I first saw the toy, I just thought I’d found a broken, old bootleg. Turns out, the toy was actually produced with the missing arm. Isn’t that great? I guess they wanted it to be semi-accurate to the Terminator movies, and they just used the bronzy-copperish color scheme to throw-off the lawyers. 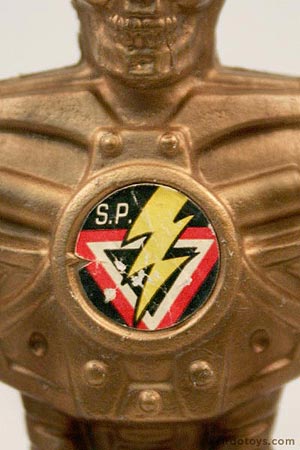 And lastly, we have the big, honkin’ chest plate sticker. I don’t understand and have yet to find out what the lightning bolt, triangles and initials “S.P.” stand for. Is this guy the member of some bootleg superhero team? Is this their team logo?

Any information would be greatly appreciated… or any other likely solutions for the S.P. problem.

Buy some robot toys on eBay!