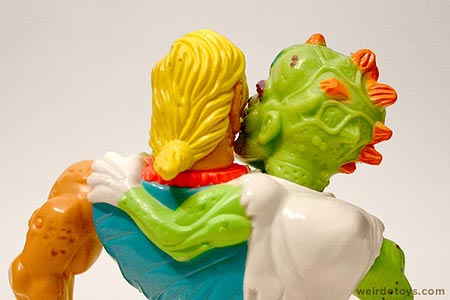 Isn’t it a beautiful thing? A kiss on the cheek and a sweet whisper in your lover’s ear. There’s nothing quite like the love between a man and a monster?

Waitaminit! These guys may be close, but they ain’t smoochin.’ 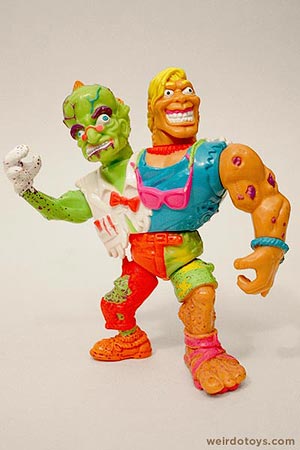 Looks like they’re actually some kind of mutated freak. (It’s their mutation that makes them freaky, not the fact that they’re conjoined.) 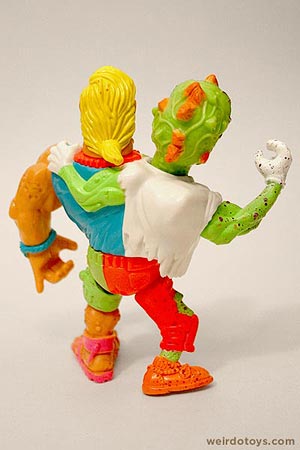 I didn’t know what this toy was at first, but i did immediately recognize it as a Playmates Toys figure due to it’s distinct, quirky character design and sculpting style. (Playmates’ toys were distinct at the time anyway. I’m not sure how good they are nowadays.) Its brightly colored neon and splattered paint applications made me think it could’ve been from the Toxic Crusaders toyline. I also saw the word “Troma” on the foot, so i immediately knew this guy was in good company. For those that don’t know, Troma is a studio known for it’s B-movie horror/comedies… but more on that later.

A quick web search taught me a bit about this character. He’s Headbanger – a fusion of two opposing personalities in one conjoined body. We have Bender (the mad scientist) who has somehow accidentally been attached to Fender (a surfing, singing telegram boy who is apparently responsible for the accident). Seems like his name should be Fender-Bender or something like that. Too obvious I guess.
(Click to enlarge)

As you can see, Headbanger comes with a surfboard that is chock full of gross texture and sea creatures and stuff. 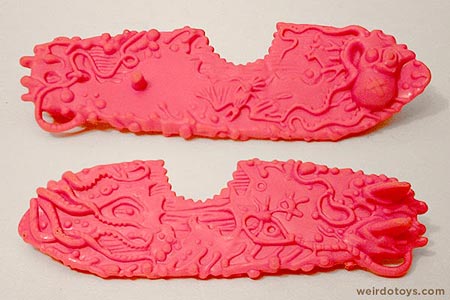 Here’s a look at both sides of the gnarly surfboard.

Now, back to Troma. They’ve made tons of movies over the years, but one of their most notable is The Toxic Avenger. It’s a great, horrible movie about a kid who gets transformed into a big, musclebound, toxic, crimefighting freak.

Well, this R-rated movie full of sex and violence somehow got transformed into a kids cartoon. I’m all for sex and violence, but i’m not quite sure kids should be watching the Toxic Avenger just yet. Does anyone else think this is funny? I was actually discussing this idea with some friends a couple of weeks ago. Who started the trend of converting R-rated movies into kids shows? I’d love to see kids’ reactions (and their moms’) after seeing Toxie kill a man with his bare hands.

Isn’t it funny that this…

What are some more R-rated favorites that somehow became kids’ cartoons? The only movies I could really think of were The Toxic Avenger, Robocop and Rambo. Anyone else know any kids shows based on adult entertainment?