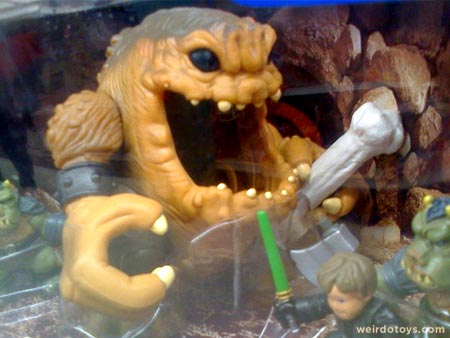 I should just have a Twitter plugin on the site, but that’s too much effort at the moment. Also, you guys could easily follow me on Twitter… but I know that a lot of folks (including myself) don’t really get tons of joy from using Twitter, that’s why I’ve taken your advice and created this post. (It’s not really super-toy-related. In fact it’s a bit too self-important.)

Please note, most of my “tweets” (i cannot believed i just typed that) are filled with random BS, but here are some potentially noteworthy tidbits:

• I posted some crummy pics of my desk at work. (These are just 2 detail views. More later I hope.)

• I had a craving to go to Toys ‘R’ Us. I ended up going, but didn’t buy anything. I did see this cool Batman set and this shitty Rorschach doll.

• I posted some PEEPS that I’d enjoy a lot more than the crappy ones they sell every year at Easter.

• I got invited to guest blog on Amazon.com’s toy blog, Toy Whimsy. (I’ll let you know about that later as I get around to writing something.)

• I cursed the fact that Jim Carrey, Sean Penn and Benicio del Toro are going to star in a new 3 Stooges movie.

• I got a cool, weirdo skeleton toy from the same guy who sold me the Underworld Warriors.

• I went to a toy show in Charlotte and tried sharing pics. I think people should see the baby doll of Archie Bunker’s Grandson.