Well, last weekend I took a trip to the Anderson Jockey Lot, and surprisingly, I actually found a handful of things. I’ll share them all with you over the next few weeks, but let me start things off with this freak.

I don’t know what I’ve found here. This guy looks like he’s the alien leader of the town parade… but he’s awfully mean and gross-looking for such a fun, celebratory event. Look at his vibrant, ugly-as-hell military garb made of up of gaudy, primary colors. Maybe he’s not mean at all. He’s actually just pissed that he has to wear that goofy outfit. 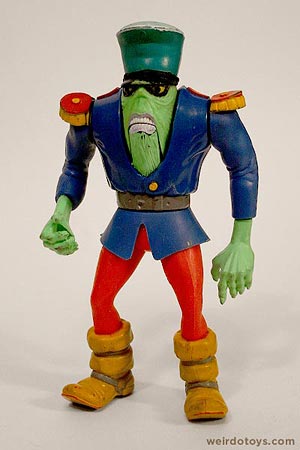 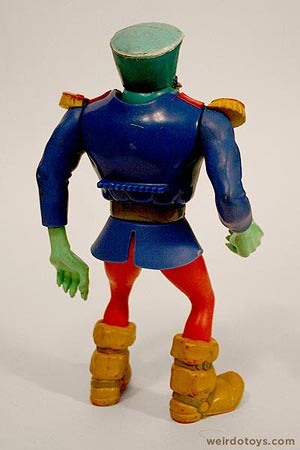 The fun doesn’t just stop with his festive outfit, this guy’s actually equipped with “crowd-pleasing action.” Just push the ridge on his back, and he twists, raises his hand (which could easily hold a baton) and cheers to the neighborhood kids letting them know they’re gonna get some candy.

Seriously though, the only clue I got from this guy was the markings on his inner thigh which read, “LJN Toys Ltd © 1986 Telepix LCI.”

I searched for LJN toys, but all I found was webpage after webpage of Thundercats toys listings. I found no sign of him. Then I started thinking back to my childhood… to the other toylines or cartoons somewhat related to Thundercats. I remember there being a couple of other cartoon shows very, very similar to Thundercats’ themed-heroes approach. They were shows I always viewed as some kind of a trilogy or something – Thundercats (land), Silverhawks (air) and Tigersharks (sea).

Eureka! After a quick search for Tigersharks toys, I eventually stumbled upon a photo and the name of our ugly friend. He’s actually a character named Captain Bizarrly – an evil pirate who battled the Tigersharks.

It would’ve been funnier if he was simply the reluctant leader of the neighborhood parade. 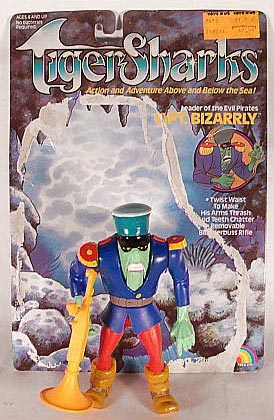