As most of you know (and as some have felt), the world’s “financial situation” isn’t too great right now. Here in the U.S., folks are saying we’re in a recession (I think the media helped perpetuate that status with their incessant fear mongering, but nonetheless, that’s where we are). I know a lot of folks are losing jobs and homes, so I feel extremely fortunate to still have my job and home, and I even have the time and money to maintain this goofy blog.

… which leads us to our theme for today’s entry – Money. To be more precise – saving money.

No, I’m not gonna be providing any cost-saving tips for toy collectors or anything like that (God knows you can’t get cheaper than some of the crap I’ve picked up over the years). I’m actually referring to something I’d never imagined would be on the Weirdo Toys blog – coin banks.

What better way to save money for weirdo toys than by placing loose change in a couple of other weirdo toys. 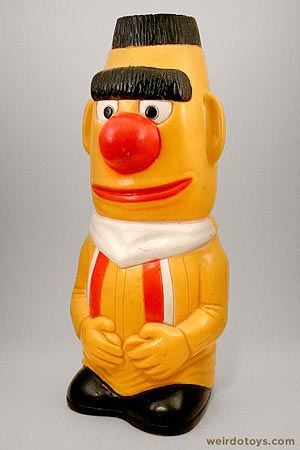 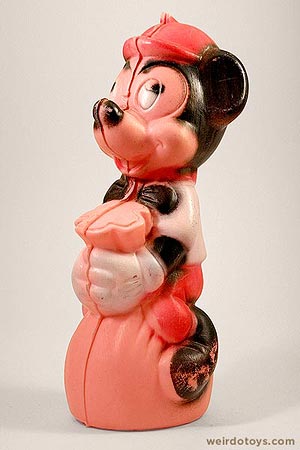 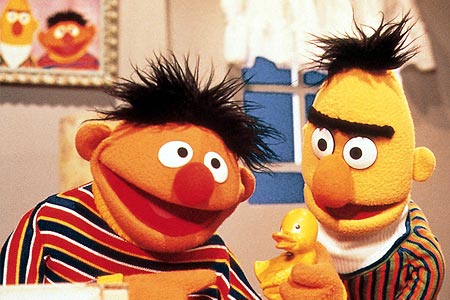 As you may have noticed, the first bank posted there is Bert (or seems to be).
Of course we all know him from the children’s show, Sesame Street. He hangs out with his buddy (or brother… or lover), Ernie. 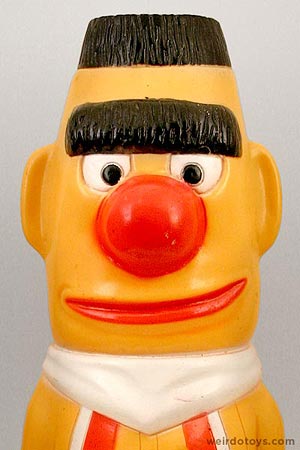 As you may have noticed, Bert’s a bit off-model. With his round, red clown nose and military-style buzz cut he’s not as cute and “muppety” as his TV show depiction.

Look! He even has a slight smirk. Bert should NEVER show emotion (other than frustration or anger)!

This Bert is just awkward. He appears to be more squatty than I’d ever imagined. In fact, he’s so short, he’s having to pull up his long shirt so he doesn’t step on it… and his shirt’s totally the wrong color. It looks like it’s striped, but I guess the manufacturer couldn’t afford more than four stripes (according to his markings, this guy was made by New York Vinyl Prod. Corp. in 1971). 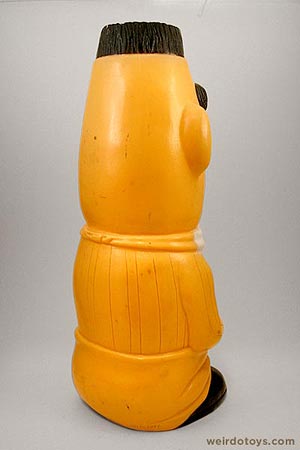 Actually, now that we have a better look at the the back, it actually looks like Bert is holding a towel around his waste. What the hell? I know Sesame Street had scenes of Ernie in the tub, but I never remember scenes of Bert in the shower. And as with all sub-par quality toys, only the front of the toy is painted (unless you count the full paint app of the hair).

He’s ugly and totally wrong, but that’s what I like about him. He just has a peculiar charm and is “off” just enough to make him intriguing. He’s a pretty good size too. He’s stands slightly taller than 12″, and he’s made of pretty sturdy plastic. 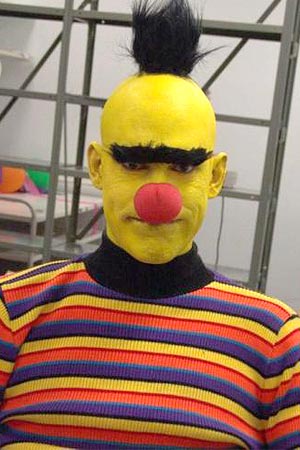 Weird Bert image courtesy of the True Feelings On The Closing of TMS Weblog. Thanks!

As a side note, I wanted to show you something I found while searching Google for images of Bert. It’s live-action Bert. Freaky. 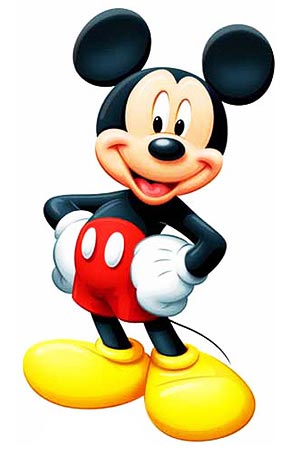 Next we have Disney’s Mickey Mouse. Arguably the most popular cartoon character in existence (also the most mind-numbingly dull). That’s why I was totally shocked when I found this little beauty. 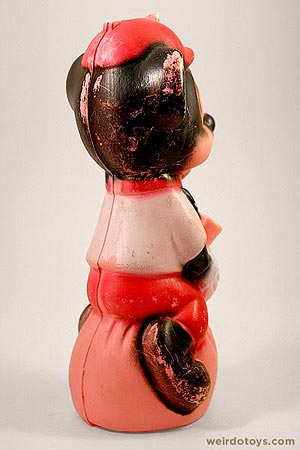 I have to tell you a little bit about the guy I bought this from. I was strolling around the show, going table to table, and I came across this guy with a table full of vintage Mickey Mouse stuff. It was all super-old, antiquey and expensive. I could clearly see high price tags on most of the items there, so I was reluctant to even check the price on this ugly bank I spotted. I picked up the bank. Flipped it over. No price. Before I even had a chance to put it down, the guy blurts out “I’ll do a dollar on that!” I know I had to have a look of excitement in my eyes when I replied, “Really? Okay!! I’ll take it.” The guy paused for a second. I could see the gears turning in his head. He eventually spoke up again and asked “Wait. What is it? Why are you so interested in it?” I just laughed and simply told him, “Because it’s so horrible.” He joined in with some obligatory social laughter, but I could see the doubt and soon-to-be regret he was going to feel for the rest of the show… wondering just how much money he threw way by letting this jewel out of his possession for a mere dollar.

I’m sure the joke’s on me… but I think it’s worth the buck I paid for it. I hope you agree. 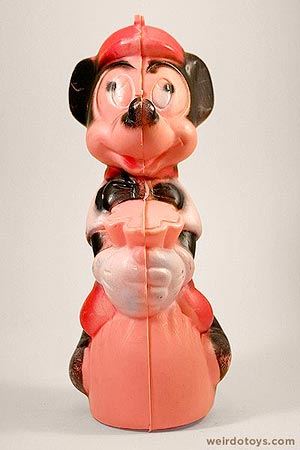 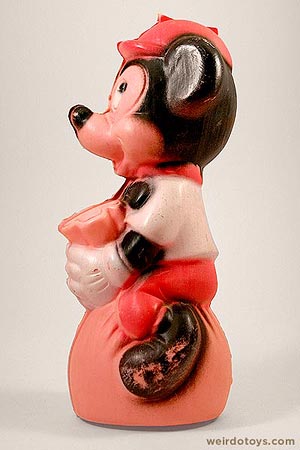 First thought – This thing is messed up. Seriously.

I’m pretty sure this thing isn’t a Disney product at all (thank goodness). Just look at it. 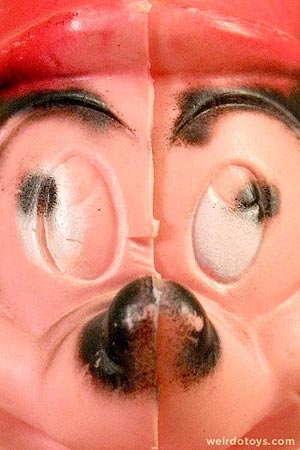 Half-assed, off-register paint job, flimsy-ass plastic and a horribly sloppy, jagged seam. Harsh words I know, but it’s only because I love him so much.

Outside of that, I love that Mickey is wearing a little cap and long pants. He looks like a little jockey riding his big money bag. 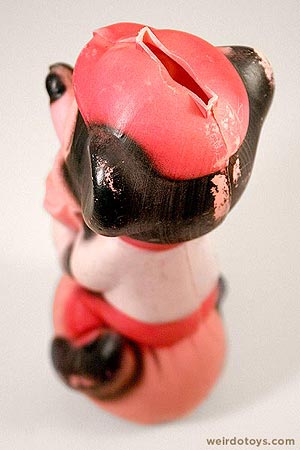 Only bad thing about the Mickey bank is that there’s no alternate opening to get the money out once you’ve filled the thing. There’s just the slot on top, so once the money is in there, it’s most likely not getting out (guess that’ll guarantee some savings).

Hey another side note. I normally don’t do this, but when I was Google-searching “Mickey Mouse” I came across this intriguing and hilarious photo of Mickey and Minnie Mouse at Mardi Gras. I just had to share it (This one’s dedicated to you Reis 😉 ). 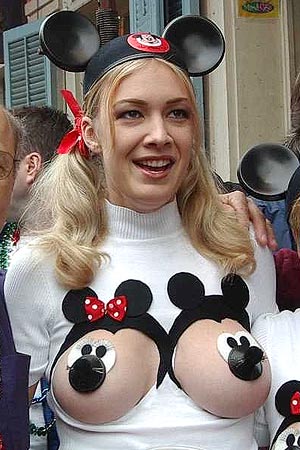 Maybe I should start a Weirdo Boobs blog?