Well, as you’ve seen here before (and I’m sure you’re bound to see again), I have some delightfully horrible Mexican bootlegs to share. (By the way, I hope that Spanish blog entry title is correct. I kind of guessed at it using Babelfish and Google. Who needs to bother learning multiple languages? 😉 )

It’s great just seeing some Mexican sculptors’ attempts to create the likenesses of popular comic characters. These guys aren’t just bootlegging Marvel Legends toys, they are making custom sculptures (maybe even something that could be equated to limited edition designer vinyl), and they have their own personalities and unique stories to tell. 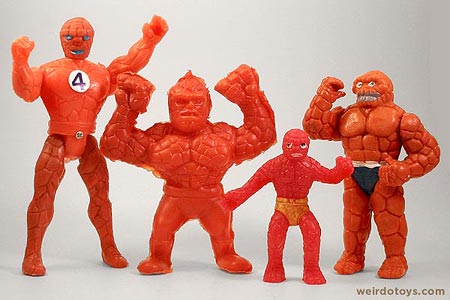 Let me back up for a minute just to give the unknowing readers a quick rundown of what they’re looking at. 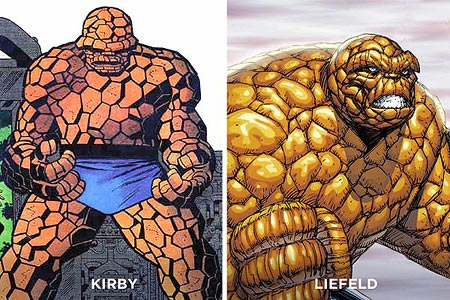 This is “The Thing.”

(I threw in the Jack Kirby / Rob Liefeld drawing comparison just so the comic geeks out there can vomit ever-so-slightly. Well actually, that’ll make anyone vomit.)

I’m not sure if you all know of this character. 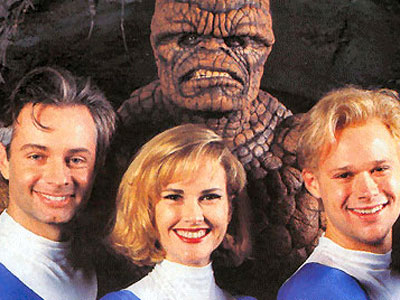 The Thing is a member of the Fantastic Four – a group of scientist buddies that went into space, got zapped by cosmic rays and ended up a mutated bunch of freaks. Scientist, Ben Grimm (The Thing), turned into a big orange rock guy. A rock guy in his underwear. Oh, and they all star in their own comic published by Marvel Comics

Now that we’ve got that outta the way, let’s take a closer look at these bootlegs action figures one-by-one. 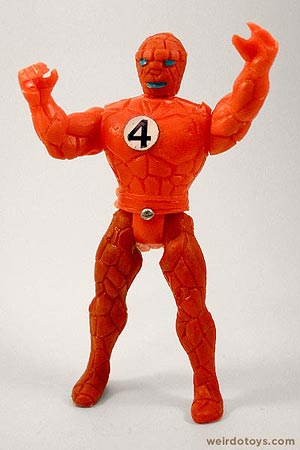 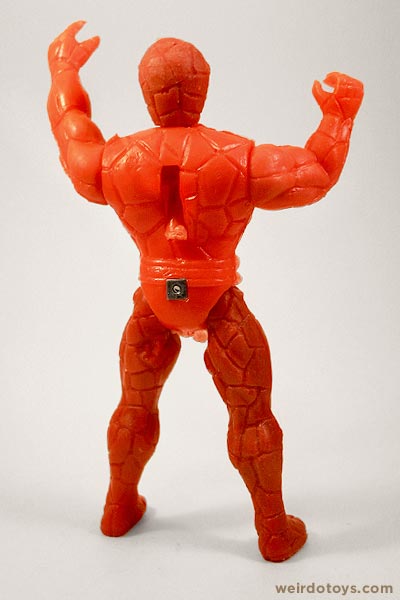 Okay. Is it just me, or does this guy appear naked at first glance? He has a belt, no genitalia, and darker legs. I guess that implies pants well enough.

He also has a “4” sticker on his chest. Maybe he needed the 4 so we wouldn’t confuse him with any other of the Marvel character bootlegs.

Look at his funky blue eyes and blue mouth. Blue is a good color choice, I guess, since it’s the complement to orange, but it’s still kinda creepy. He’s glowing from the inside or something. 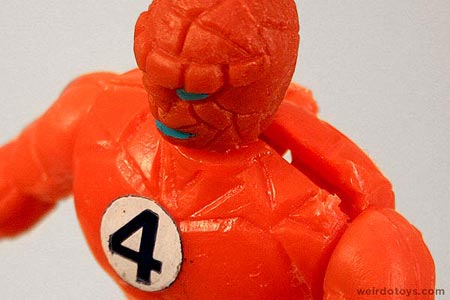 So, this guy actually takes it up a notch (or is that down a notch?) when it comes to bootlegs. Whoever made this thing thought it’d be a good idea to make the arms connect by plastic a rod which is controlled by a small lever sticking out of the toy’s back. I guess it’s an “action feature.” Only thing is, it’s hard as hell to get it to move, and neither arm can move independently. Not only that, the pieces weren’t really made to fit together, so the rod is actually somehow forcing the toy’s shoulder/torso to pry open, making it even harder to maneuver the action feature. Kinda crummy. 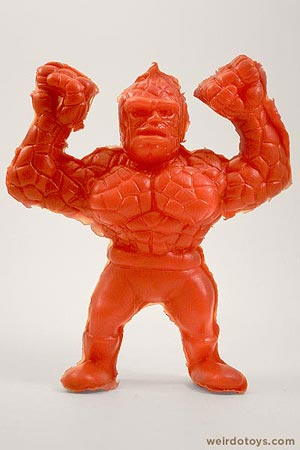 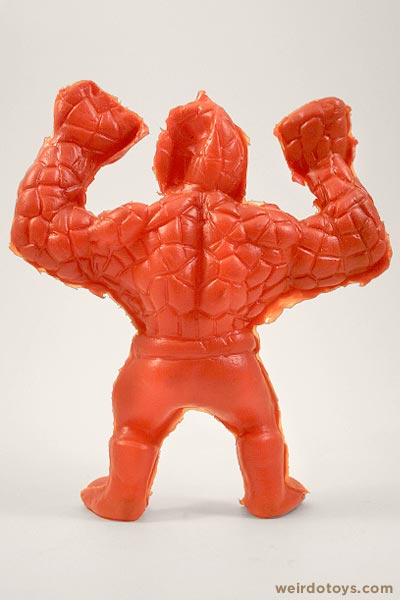 All I can say is this bootleg ROCKS (pun intended). He’s not even really an “action figure.” He’s just a horribly, crappily, ridiculously, poorly-made mold-injected toy. He’s hollow, has no paint whatsoever, and flack all over… but at least he’s orange.

What does impress me though, is the fact that the sculpt is a cool, original take on the Thing. He’s a bit more cartoony with less of the “traditional” superhero proportions as seen in the previous bootleg. 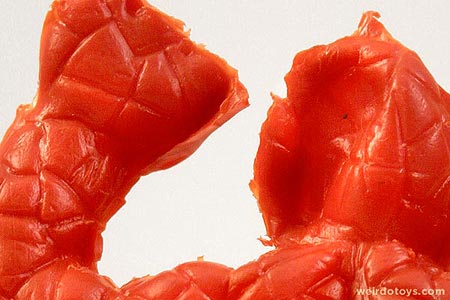 Look at this. Chunky, sloppy flack and a caved-in head. That’s some good bootleg craftsmanship 😉 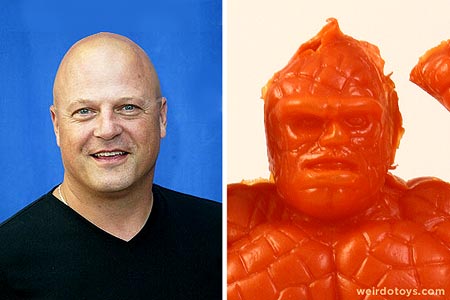 This Thing actually looks a bit like Michael Chiklis who played him in the movie. I don’t know if this photo captures it well, but in person, I thought I was looking at a bootleg Commish figure.

Here we have little, cherry-flavored rocky candy Thing (I don’t mean that literally. He’s plastic and all. He just kind of reminded me of rock candy).  He’s just a solid, shiny, translucent chunk. Reminds me of those little PVC figures like M.U.S.C.L.E. or Smurfs or whatever. 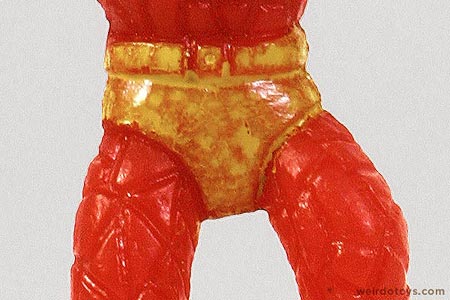 One thing that caught my eye was the odd paint job. Look at his underpants. It almost looks like it was just applied minutes ago. Or it is still wet, because it isn’t chemically bonding with the plastic. Do you know what I’m talking about? 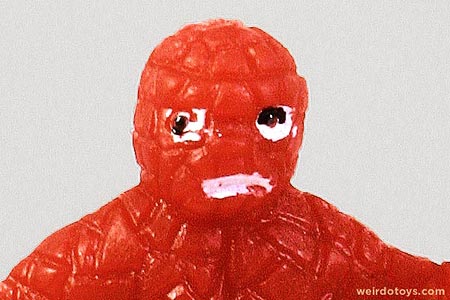 Poor guy. His face barely fits on his head. 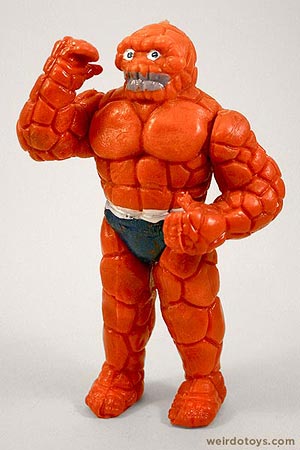 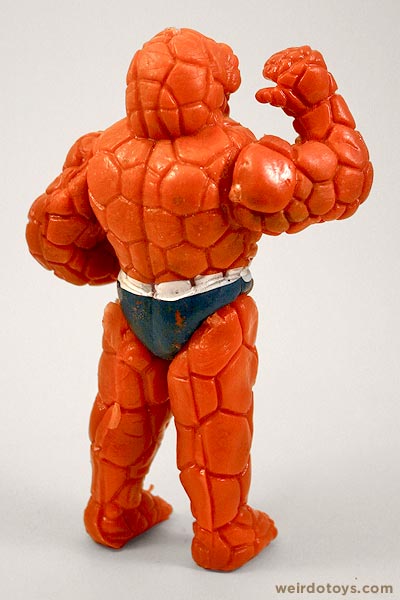 Last, and definitely not least, is my favorite of the bunch. The most goofy, quirky, fun version of the Thing I’ve ever seen. I wouldn’t be surprised to see this guy in a low-budget claymation version of the Fantastic Four.

He’s just so fun. A big, round, chunky, loveable, bright, fully-poseable Thing figure. He even has hand-painted underwear. 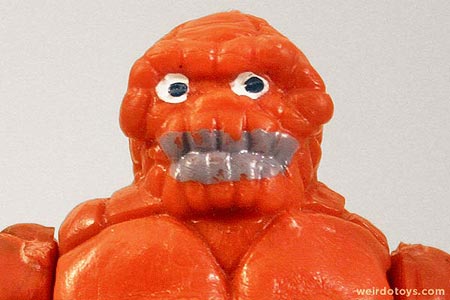 I loved the startled look on his face. He must’ve just seen bootleg Invisible Girl in her invisible clothes.

And what’s up with the gray lips? Is it gravy? Porridge? Whatever it is, he’s just devoured it.

Buy The Thing toys on eBay!