Like so many other generic hero toys produced through the years, this figure was a badly-executed ripoff of the iconic 80s toyline, Masters of the Universe (unfortunately, I don’t know the name of this character or the toyline he comes from… sorry folks). 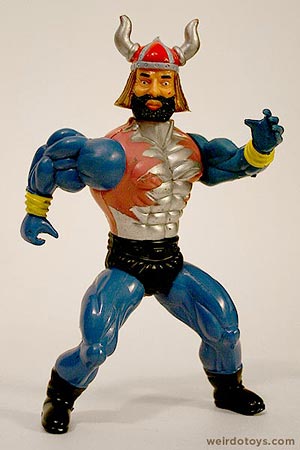 He’s pretty crummy. If they’d ripped off the molds from the source, he could look a little better, but that would’ve robbed him of his charm. I think it’s his absurdly swollen, plump muscles that make his appearance that much more comedic (not to mention his stumpy, blue arms and legs, silver torso with pink starburst designs and the goofy-looking horned helmet). Sure, this toy’s ugliness appealed to me, but I think it was the slightly higher thinking of the toy designer and manufacturer that delighted me even more. There are tons of generic He-Man ripoffs out there, but this little toy series featured ugly barbarian guys with spinning heads with a human face on one side and a monster face on the opposite side. Pretty cool for a Dollar Tree toy.

We’ve established this generic, dual-personality barbarian isn’t a He-Man figure or anything, but he does look like he could be the distant cousin of Man-E-Faces. (Remember Man-E-Faces? Who could forget him? He’s the guy with the spinning faces to reveal a man, a robot and a monster). 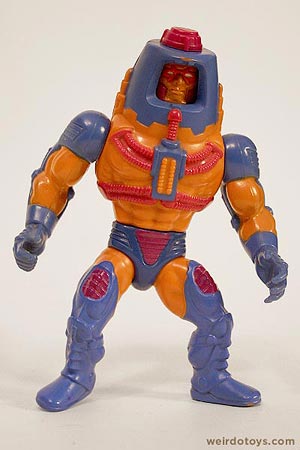 I think I’ll call this barbarian guy Cup-L-Faces. That seems appropriate. He can be one of those low-budget monsters that Skeletor makes (first Faker, now this).

I know you’re wondering “what makes him a bad guy?” Well, if the evil monster on the back of his head doesn’t convince you, there’s the tell-tale blood spatter on his cheek and lip. That’s hard core. No He-Man figure has that. That’s a sure sign he’s a killer.