I have something to admit. I’m white. I’ve been white all my life. And growing up as a white kid in the 80s, I never realized how every popular toyline and cartoon was pretty much directed at me. It seems that most headlining heroes from cartoons and toylines were either white, or some kind of creature. There was a huge lack of culturally diverse action figures. I’d never considered the fact that 80s black kids were “forced” to play with predominantly “white” characters from He-Man to G.I. Joe to Mask. You name it – white. Luckily, one mother did notice and actually did something about it. She started her own toyline, and specifically created black heroes.

This is where Olmec Toys holds its place in toy history. It was a toy company created by Yla Eason, a mother who “couldn’t find a black super hero for her son.” She thought her son should have some toys that reflected his skin tone. One of these new toylines was Bronze Bombers… which is kind of like the “black G.I. Joe” (in blacksploitation terms – G.I. Bro). 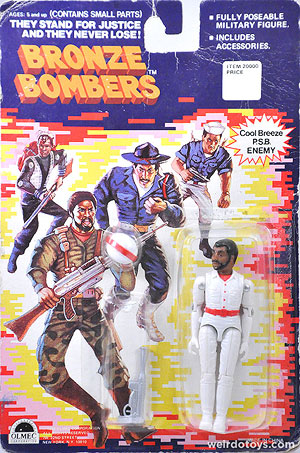 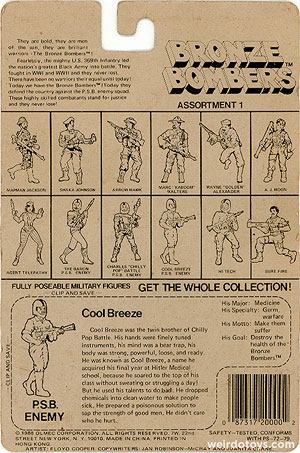 A lot of us played with G.I. Joe. Their white-washed approach to active recruits was countered with Olmec’s Bronze Bombers. These guys were supposed to represent iconic historical soldiers who were black.

Here are a few tidbits pulled from the card:

“They stand for justice and they never lose!”

They are bold, they are men of the sun, they are brilliant warriors – The Bronze Bombers™!

Fearlessly, the mighty U.S. 369th Infantry led the nation’s greatest Black Army into battle. They fought in WWI and WWII and they never lost. There have been no warriors their equal until today! Today, we have the Bronze Bombers™! Today they defend the country against P.S.B. enemy squad. These highly skilled combatants stand for justice and they never lose!

They never lose. Ever. Ever ever… ever.

So, let’s take another look at that card art. It’s a bit strange and familiar isn’t it?

I get that these guys were supposed to be integrated into kids’ G.I. Joe universe, but wasn’t there a better way to do that than to rip off the card art? I don’t even mean making them stylistically similar. I mean literally, copying/tracing existing Hasbro card art. 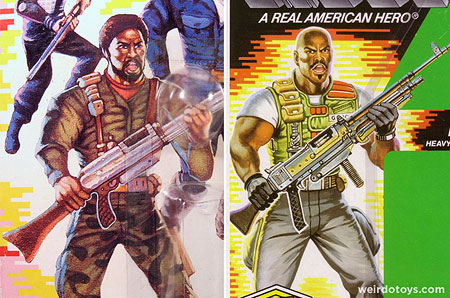 This guys could’ve been Road Block’s grandfather or something. See a resemblance? 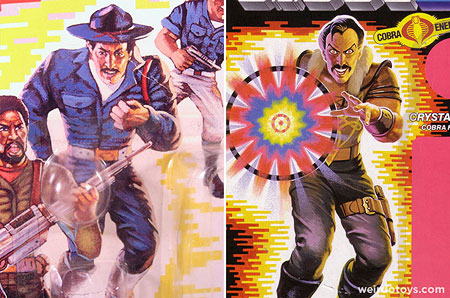 Looks like Ol’ Kaboom here may have actually lost his hand playing with explosives. Looks like a prosthetic to me. 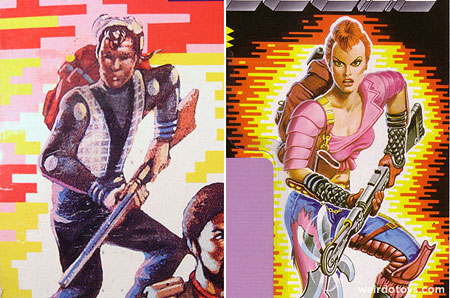 This is a strange choice. This guy’s art is based on one of the female characters and the artist decided to paint the metallic joints of the actual toy. Weird. 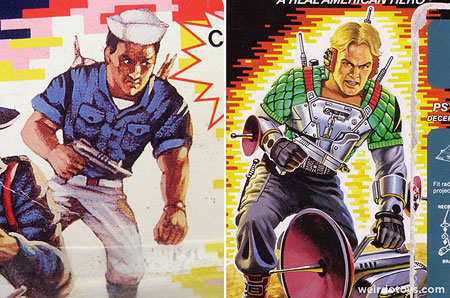 So. this sailor is holding some weird space laser, dangling his arm awkwardly and wearing some kind of sci-fi backpack. Ooookay.

Okay, we now know who the Bronze Bombers are, so now let’s take a closer look at this Bronze Bomber figure I got my hands on a while ago.

I present to you – Cool Breeze. 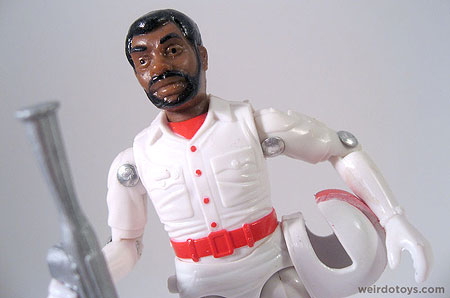 (I know these characters are supposed to be “with it,” but isn’t “Cool Breeze” a bit stereotypical… even for a black toyline?) 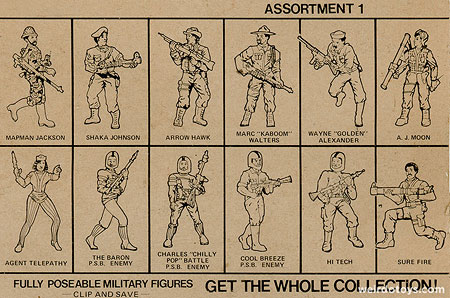 Not unlike G.I. Joe vs. COBRA, the Bronze Bombers battle PSB Enemy. I don’t quite know what “PSB” means, but Cool Breeze is one of the bad guys.

His Motto: Make them suffer.

His Goal: Destroy the health of the Bronze Bombers

Cool Breeze was the twin brother of Chilly Pop Battle. His hands were finely tuned instruments, his mind was a bear trap, his body was strong, powerful, loose and ready. He was known as Cool Breeze, a name he acquired his final year at Hitler Medical School, because he soared to the top of his class without sweating or struggling a day! But he used his talents to do bad. He dropped chemicals into clean water to make people sick. He prepared a poisonous solution to sap the strength of good men. He didn’t care who he hurt.

Unreal. Hitler Medical School? That is pretty evil. (Also seems odd that he’d attend a university named after someone who had a leading role in the brutality of blacks… but I digress.)

Okay, back to the figure.

First of all, the head sculpt is great. I can’t get over it. 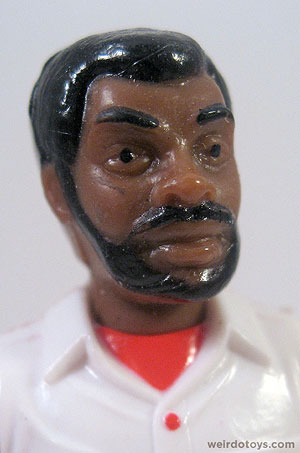 Seriously. I think Cool Breeze looks like a genuine, black man and not just a bad, blackface repaint of some old Dukes of Hazzard toy.

(Could this not be a Roger Murtaugh figure?)

What the toys lack in originality, they make up for in realism. Awesome head sculpts. 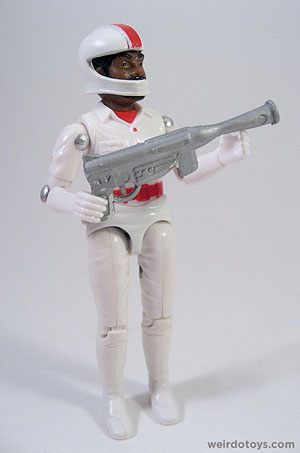 These figures are 3 3/4″ tall with articulation similar to first generation Joes (no Swivel Arm Battle Grip).

They’re pretty well-sculpted, having about as much detail as some of the original Joe figures.

Their construction is “okay”, but they seem to feel brittle. I’m in constant fear that I’ll break his thumb off or something. 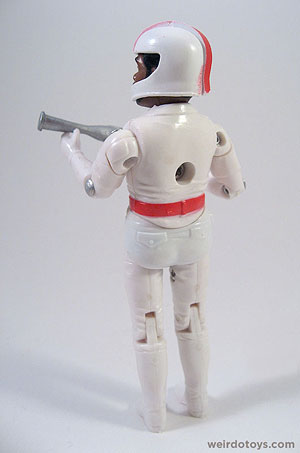 The accessories on the other hand, suck major ass. The helmet and gun here not only look clunky and simplified compared to the detail of the soldiers… 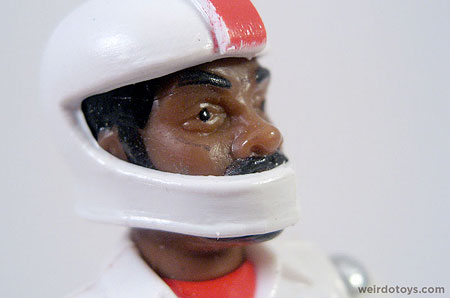 but the helmet doesn’t fit his head. Look at that thing. What the hell were they thinking? Is it supposed to be a Motorcycle helmet? 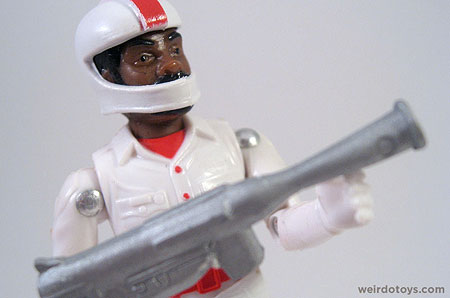 Oh, and he can’t hold his gun. Well, it’s not as much a gun as some kind of weird bubble blower or something. Ha!

Here are some more Bronze Bomber tidbits. Not only did Olmec make a line of action figures, but they even had vehicles. That’s how legit the Bronze Bombers were. 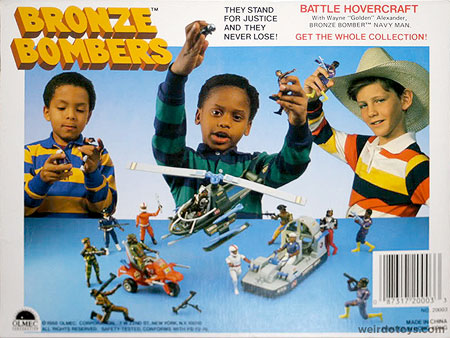 “How can we make this white kid look more white?”

And believe it or not, in the late 90s, the Bronze Bombers returned. 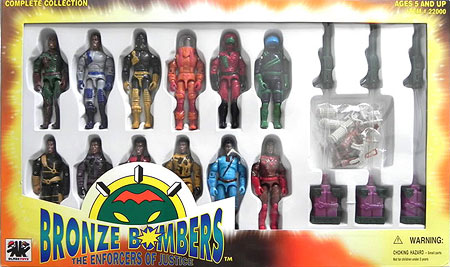 As I mentioned before, I grew up white, so I wasn’t really paying attention to Olmec Toys in their heyday. They are no longer producing toys but Olmec did a few lines to be sold alongside He-Man, She-ra and G.I. Joe – Sun-Man, Butterfly Woman and Bronze Bombers, respectively. I know I’ve semi-mocked these figures, but I actually truly appreciate the effort Olmec made in their quest for more diverse action figures. It’s too bad they didn’t have the artistry, writers and marketing budget that a powerhouse like Hasbro has. But if they had that, it wouldn’t be such a unique story of the underdog. If you want to dig a little deeper, you can find out all about the rise and demise of Olmec Toys.