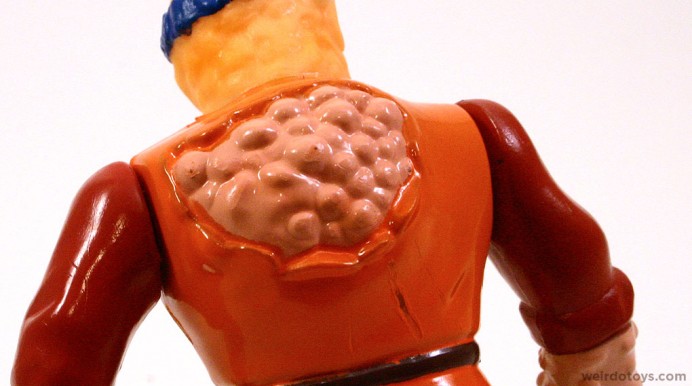 Ever find yourself buying a toy simply for the horrendous (or hilarious) packaging? It’s rare that I do that, but in this case, that’s just what happened.

That’s where this story begins. 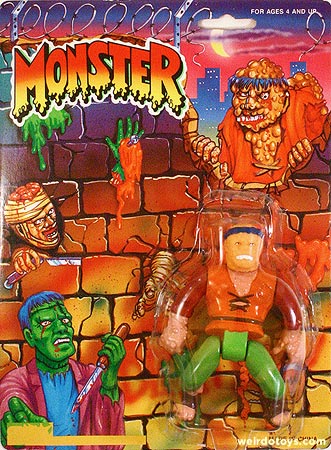 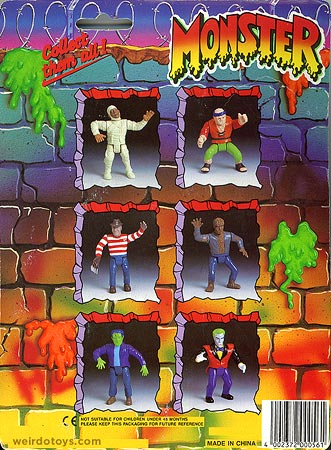 I discovered this MONSTER toyline last year, and not only did I love its generic, non-committed name, but I immediately fell in love with its packaging. The front of the card features a very weird illustration collecting some “classic” monsters, but the thing is, they’re all a bit out of character and just odd-looking (well, more odd-looking than usual). It really looks like they’re all breaking out of a prison or mental ward or something.  There’s barbed-wire-covered brick walls they’re all bursting out of (actually, with the city skyline in the background, it looks more like they’re bursting into the prison). And not only that, they’re carrying knives and straight razors and stuff. These monsters don’t mess around. You thought they were dangerous before? Now they’re armed! If you cross paths, you are definitely screwed.

The look of this piece really reminds me of those funky hand-painted, amateur Hollywood movie posters. 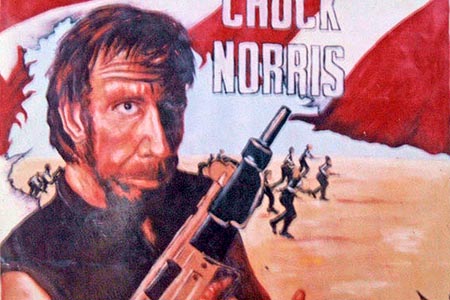 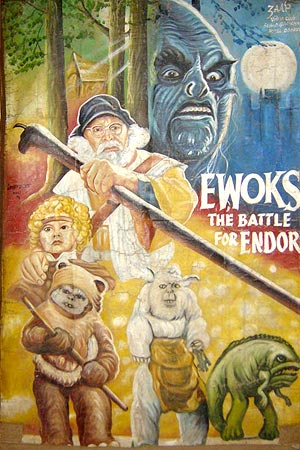 The characters look familiar but they aren’t quite right. (I need to do a Weirdo Posters blog next 😉 )

So, let’s take a closer look shall we? (Lemme warn you, I’m gonna be over-analyzing the hell out of this package. I’m not sure why. I just have to.) 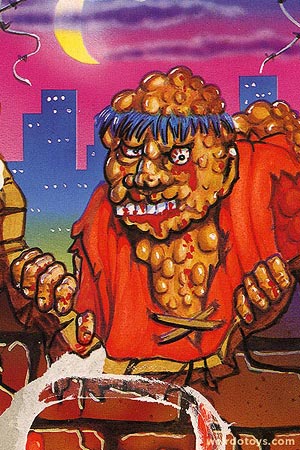 So here’s the headliner. Lets call him “Toximodo.” He looks like a cross between the Toxic Avenger and Quasimodo. 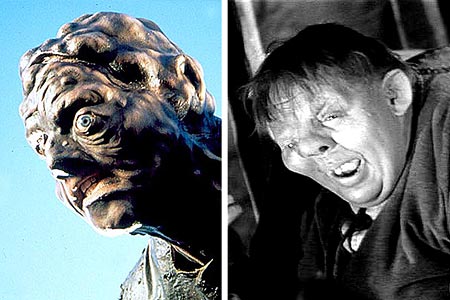 Looks like old Toximodo here got top billing in the monster lineup. Not sure why. I’m guessing he’s supposed to look like Quasimodo (or the Hunchback of Notre Dame or whatever you wanna call him). Is a deformed hunchback not scary enough? These guys really wanted to take him up a notch by adding boils, warts, cysts or whatever those are supposed to be.

Even his hump is bumpy.

Oh. One last thing. What the hell’s up with that thumb? Has it been severed? 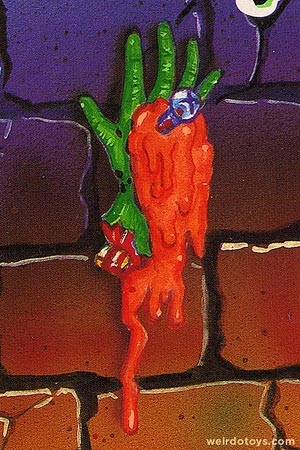 Next is a severed green hand nailed to the wall. Wait. Scratch that. It’s been screwed to the wall (Phillips head), and it’s oozing orange blood/slime. Looks like it might’ve belonged to the Frankenstein Monster, but he’s got all his appendages. I guess it’s from some unlucky passerby. 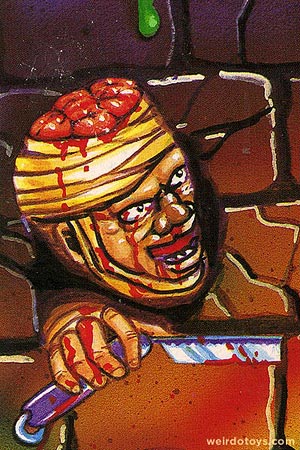 Next we have the Mummy. He’s looking a bit maniacal. He’s got a bloody straight razor, and he’s definitely eyeballing the green hand. Must be admiring his handy work (seriously no pun intended).

Again, to take up the gross factor, they’ve given this guy an exposed brain. Awesome. I thought Mummies had their brains pulled through their noses before they were prepped for “mummification.” Maybe this is just a mental patient.

Something else that’s weird is the additional bandaged mummy hand bursting through the wall. It’s a right hand, but we can see the mummy’s right hand is delicately holding a razor. Oh well. Why worry about details like that? 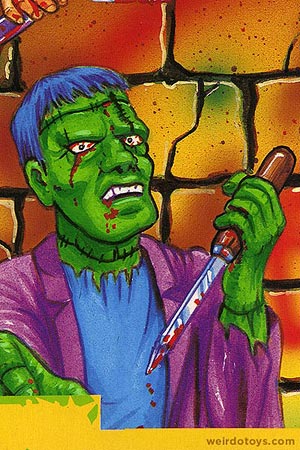 Next we have the Frankenstein Monster. He’s got a big knife/ice pick looking thing. It’s already bloody, which means he’s already stabbed somebody (or cut himself). Careful. he’s reaching for you. Also, it looks like he’s been crying blood. You know he’s evil if that’s the case.

Wonder what that yellow block thing is (more on that later). 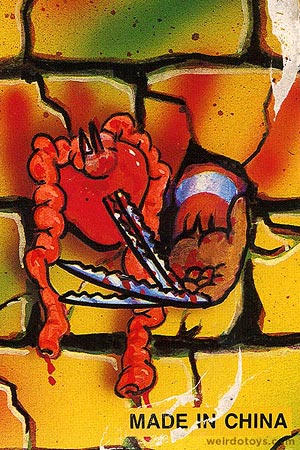 Wow! It’s Freddy’s glove poking through a hole in the wall. Looks like he’s playing with someone’s heart… a heart with intestines attached to it. I love how it’s delicately balancing on the blades. Serrated blades no less. This character inconsistency goes well with his candy-cane-colored sweater. 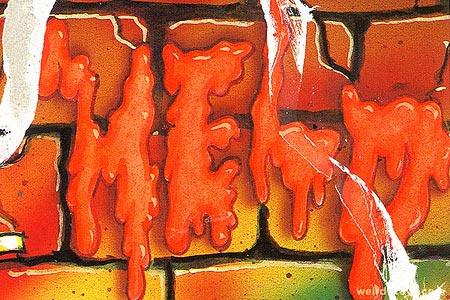 And lastly we have this simple message scrawled in orange blood/slime, “HELP.” Ha!! My sentiments exactly.

As I mentioned previously, I discovered the MONSTER toy series last year sometime. I actually stumbled upon the Mummy figure from this toyline first. I wasn’t in love with the Mummy figure as much as I was his packaging. In fact, I was gonna do a blog entry focusing strictly on his package (wait… lemme rephrase that).

But one look at the back of the card made me realize I HAD to find the hunchback figure. He was so gloriously disfigured, melting and angry. 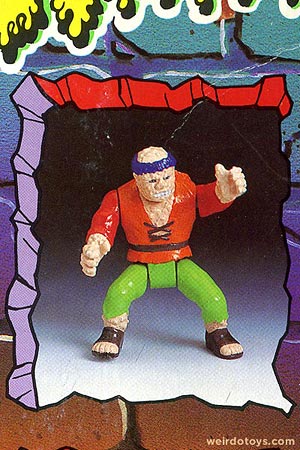 Well, luckily for you (and especially me), I found him. Now lets’ take a look at him. 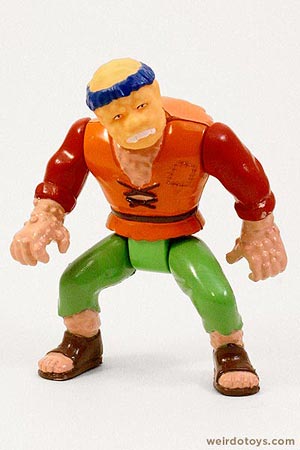 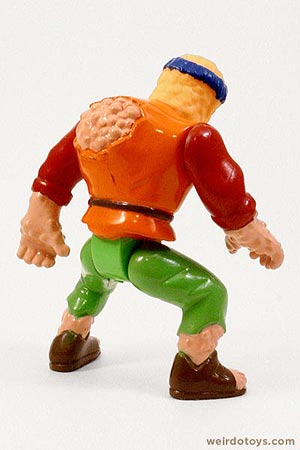 Ah. A thing of beauty isn’t it? A brightly-colored, holey-shoed, acne-ridden hunchback. Even the skin tone of his head and body don’t match. Don’t think that was an accident. These guys knew what they were doing when they made him 😉 (I’m gonna have to use that trick when I start making my own toys.) 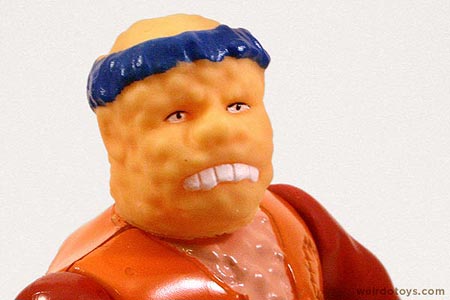 One of the things I immediately noticed is how different this character looks than the one featured on the package. On the back of the card, he has a pained, evil grimace. This guy looks like a chubby monk with acne and a bad overbite. His hair even looks like a headband. Not nearly the horror we grew to love from the front of the package.

But, to make up for it, His bubbly, exposed skin is fantastic. Really, really gross. 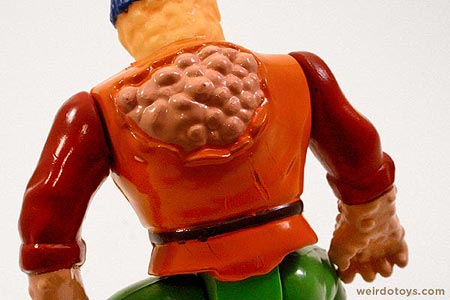 Look at that hump! It looks like a bowl of baked beans or something. That is truly nasty. I love how his hump burst through his shirt. That’s one strong hump ya got there.

Now, let’s check out the back of the card.

I’m gonna show you details of the characters pictured here, but notice how none of them are listed by name at all. We’ll just have to guess at who they’re supposed to be. I’ll try not to go into as much detail as I did with the front of the toy card. 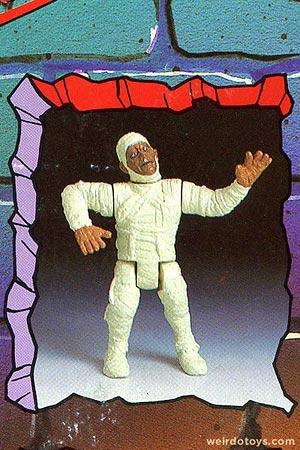 Seems like a standard Mummy figure. I have this figure, and his brain is not exposed. Bummer. Also, take note – most of the toys you’ll see here will have this same dance pose.

You just saw this guy. He’s the best. Well, he could be second to… 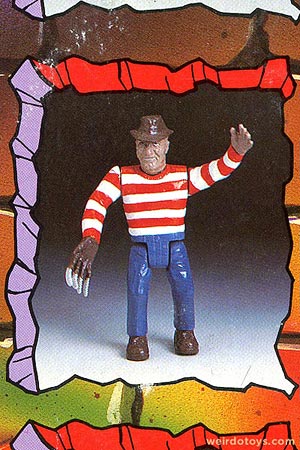 Yep. It’s Freddy. But this looks more like your friendly, retired, neighborhood Freddy. You might even leave a fruitcake at his doorstep for Christmas. He’s got the candy cane stripes and blue jeans, so you know it’s gotta be casual Freddy. 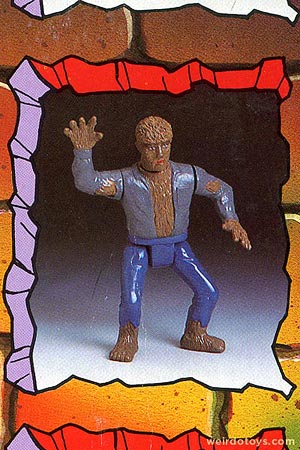 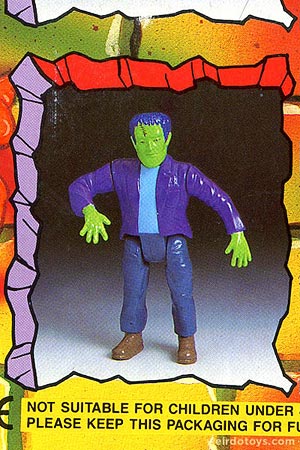 Yeah, yeah, yeah. I’m not calling him Frankenstein. I don’t know why I’m being so literal. Just trying to respect the legend I guess. His pose reminds me of the Franken- Wiggler I featured a while back. 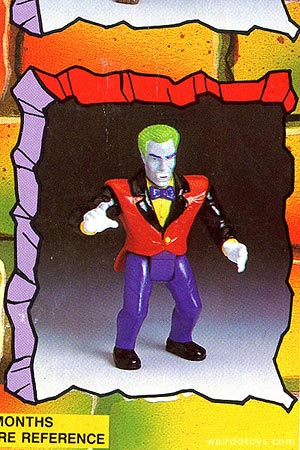 Wow. Is this guy a circus ring leader or what? I’ve never seen Dracula wearing such vibrant, goofy clothing. Or should I say, I’ve never seen the Joker with such big fangs?

One other detail I wanted to show you was this very goofy warning on the package.

“Not suitable for children under 48 months. Please keep this packaging for future reference.”

What? Keep the package as reference for the age limit? As a reference to which characters to collect? I dunno. It just struck me as funny.

Oh yeah, and there’s one more thing to mention. Remember those odd yellow blocks on the front and back of the card I mentioned earlier? Well, apparently those were areas which used to have the name of the company that produced these toys originally Sungold Mfg. Co., Ltd. (Thanks to the fine folks at Clam’s Toy Box for shedding some light on that for me and providing me with the crappy, low-res proof that the Sungold card once existed.)

As far as who made these and when they were released? That’s still a mystery I think. There are no markings on the packaging or on the figures themselves. Any info and other insights are definitely welcome. Thanks.