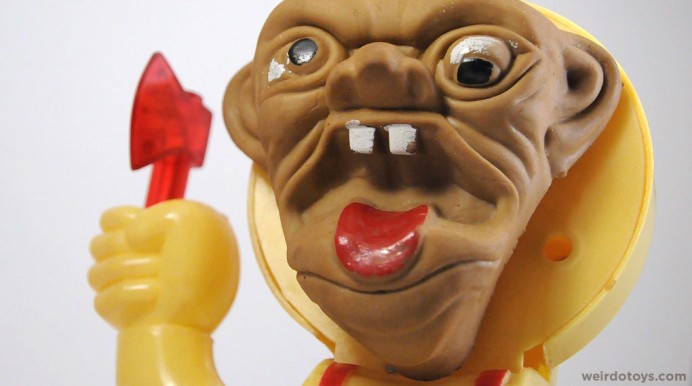 Well, it’s hard to believe, but I actually have a bunch of new info about that mysterious windup, musical demon lumberjack I was so excited about (and desperate for) weeks ago.

I’m not sure if you recall, but in that video, we saw a freaky, distorting, rubber face placed on an animatronic, musical lumberjack-type of character (I’m calling him a lumberjack because he’s wielding an axe and he’s wearing boots and overalls).

The thing was so bizarre, I could’ve sworn it was “homemade.” I kind of recognized the look of the rubbery-face and figured it was a finger puppet placed on some weird holiday toy or something.

That lead to my search and discovery of this generic set of rubber-faced finger puppets. 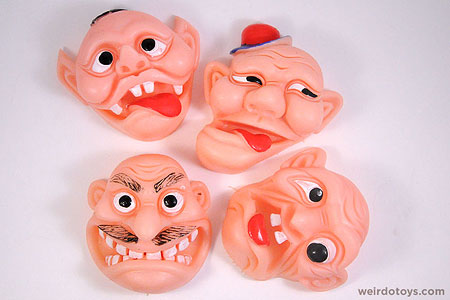 Jackpot! Not only did I get some weird-looking little finger puppets, but it appears that the demon-looking character from the video is in the bunch.

Okay, now that I’ve acquired the rubber faces, all I needed is the strange lumberjack toy.

Well, thanks to the help of some of you readers and a little bit of detective work, I discovered that this toy is called “Magic Monster.” Once I’d acquired that information, it would only be a matter of time before the toy gods sent this Magic Monster my way. 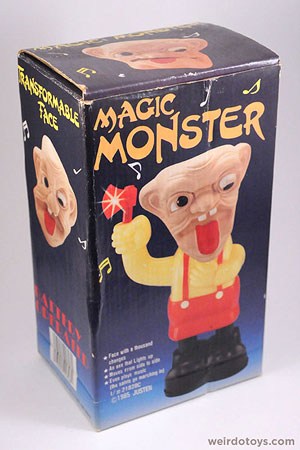 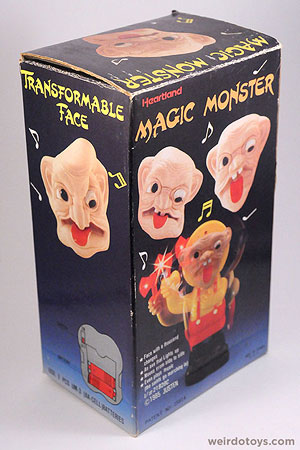 Luckily for me, when the monster reared its ugly face, it came fully-functioning and complete with its original box. (Thanks toy gods!)

It’s not a lumberjack toy at all. It is, in fact, simply a nonsensical, axe-wielding monster that sways back-and-forth to the tune of “When the Saints Go Marching In.” Who’d have thunk it?

Not only that, but I also discovered the face on the original toy isn’t the one in the video, so I was correct in assuming the video was a “custom” job. I never expected this face to be on the toy.

Wow? That’s one ugly son of a bitch.

And just as I thought – the “head” of the toy actually has a few protruding pegs which stretch the removable, rubbery face stretch, bringing it to life. 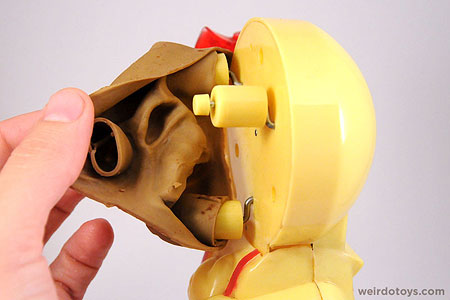 Here’s a full figure view for ya. I kinda feel that they cheaped it with the head sculpt. I know there were probably some technical limitations, but the round helmet dome thing just isn’t cutting it. 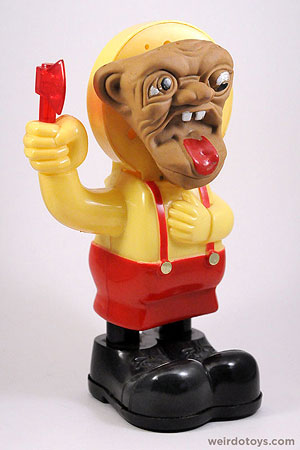 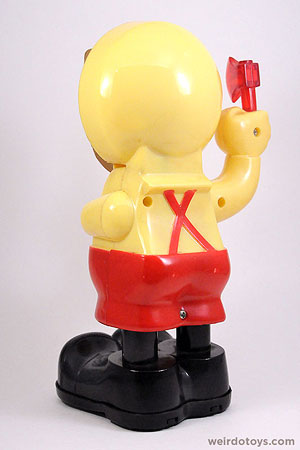 And as you may have guessed, the animatronic head perfectly accommodates the “finger holes” of the various face puppets.

This is too perfect.

Do you know what this means? I can bring each face to life, giving the freaky axe maniac multiple personalities. 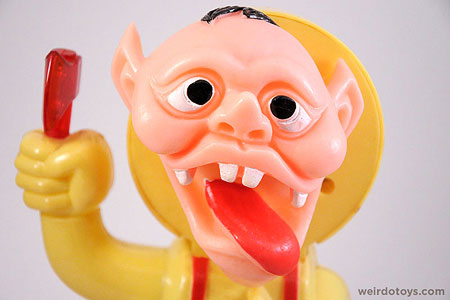 We’ve got the demon-looking guy. 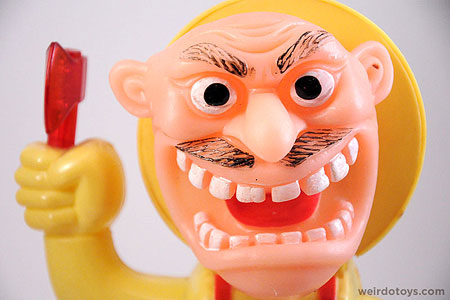 The angry, mustached man, who actually looks like an axe murder (or angry lumberjack).

The crazy old man (or is that Michael Berryman) 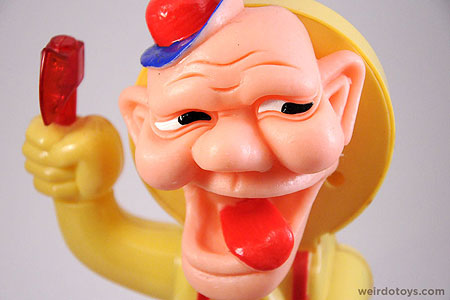 And here we have the creepy child molester. (This guy’s probably scarier than the original monster.)

You think they look cool as stills? Wait ’til you see ’em in action. 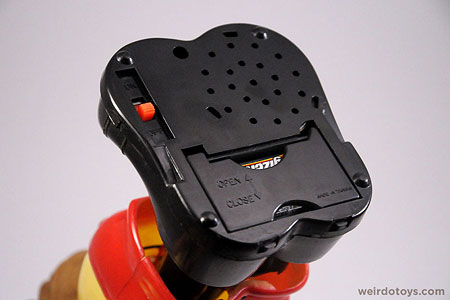 I’ve gotta warn ya though. The music in these videos will get on your nerves. “When the Saints Go Marching In” plays loudly from a speaker in his feet. Not only that, but you have the obnoxious internal mechanism of the toy continuously grinding while the song is playing . It’s basically every parents’ nightmare.

Also notice the axe has a light in it and glows red. Scaaary.

I noticed my monster toy’s axe is facing forward and not sideways as featured on the box and even in that other video. Hm.

So, which one is your favorite? I think I like the mustached guy best. He just looks right in those clothes… plus his mouth full of teeth really makes his head movements more pronounced and lifelike. Now all I need is some more cool rubbery finger puppets. Any thoughts on where to find them?

After seeing this toy and these puppets. it begs the question: Which came first? Were the faces/puppets made for automated toys like Magic Monster, or was the toy made to accommodate the finger puppets that were already being produced? 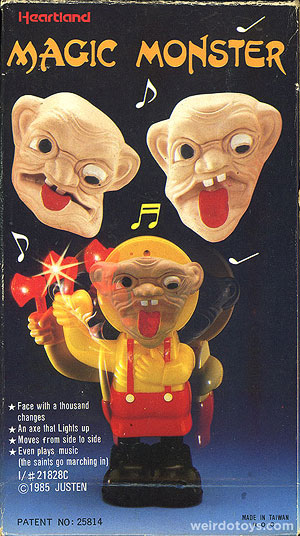 Here’s all the info taken from the Magic Monster box:

(Check out that front panel. They’ve totally masked out the big dome head behind the monster’s face. Bull. The toy looks so much better with just the floating face. And did you notice the “©1985 Justen?” Weird, huh?)

Actually, there is one other question this toy makes me ask: What the hell?